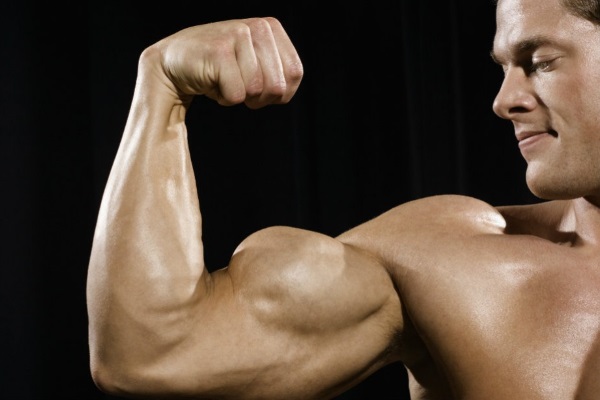 Just after you’ve trained your legs, you have much more testosterone and growth hormone in your blood. If you then train a small muscle group, it’ll grow faster. Norwegian sports scientists at Lillehammer University College tested this theory.

Study
The 11 male test subjects that the Norwegians used were aged between 20 and 34 and had never done weight training before. For eleven weeks they had to go to a bodybuilding gym 4 times a week. On two days they trained only their left biceps, doing biceps curls, hammer curls and reverse curls. [A]

The subjects trained using weights for which they could just manage 10 reps. Before, during and just after a training session they drank shakes containing proteins and carbohydrates.

Why biceps grow faster if you train them after doing a leg training session first is shown above. After any L+A training session there is more testosterone and growth hormone present in the body than after an A-training.

More studies
Danish researchers showed a decade earlier that biceps grow faster if you train them together with your legs. By the way, the Danes got their subjects to train their biceps first and then their legs. [Scand J Med Sci Sports. 2001 Dec;11(6):347-54.]

The Danish approach may be even more effective than that of the Norwegians, going by other research in which subjects train several muscles in the upper body in different sequences. This research showed that the muscle group you train first grows faster than the muscle groups you train later in the workout.