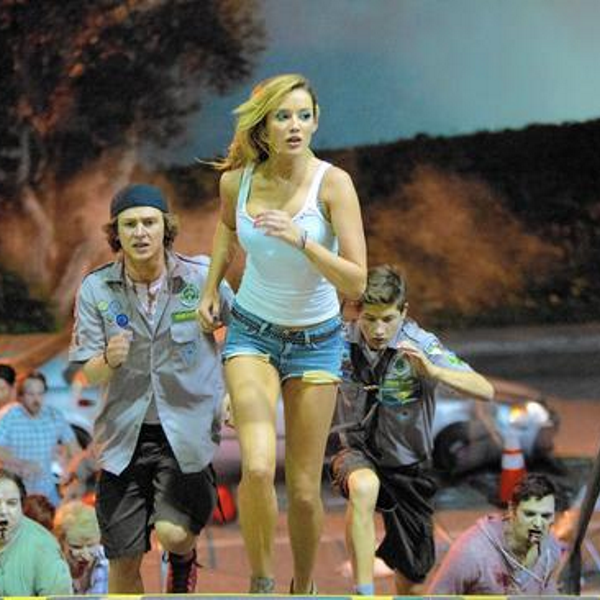 People love to talk about the apocalypse. Maybe it’s a useful way to sort out the important issues, the non-starters and non sequiturs. Perhaps it helps them to think critically and objectively. Some even go so far as to say they are “training for the apocalypse.” They say it as something between a half-hearted joke and full-bore paranoia.

For the purpose of determining how functional and transferable your fitness is, we are going to use the proverbial zombie apocalypse, despite its glorification and unlikeliness. Besides, both the CDC and the Department of Defense have used the apocalypse to evaluate their preparedness and structure, so I think it’s fair to run hypotheticals using it as well.

So how do you train for the apocalypse? It may shock you to find out that after all the years and copious hours you’ve spent trying to attain the most impressive 1-rep max numbers known to mankind, you’re no more fit for survival than you were when you started.

This scenario may be as unlikely as that outfit, but it’s a useful mental exercise anyway.

Your Big Bench Press Won’t Save You

Let’s start big and kill this notion first: “Being stronger makes you harder to kill.” No, it does not. A person with a 300lb deadlift and another person with an 800lb deadlift both encounter the same mortality when a 7.62mm round from a high-velocity rifle canoes their heads. If strength truly made you harder to kill, our military elite would train exclusively at Westside Barbell (they don’t).

Most people would agree, if caught in an epic, end-of-the world, Mad Max, zombie-eating-faces scenario, they would appreciate help from some hard-hitting CAG operator, Navy Seal, or SAS, and that having them around would increase the chance of survival. When looking for optimal models of survivability, few could surpass elite military operators.

Elite units recognize the importance of strength training, especially in context of strength-endurance. But they all recognize a far more important physical ability when they have to load an 80lb rucksack and trek for twelve hours before engaging with a target. That ability is efficiency. A large majority of military training is spent making soldiers efficient. They run, ruck, swim, and do hours of calisthenics on very little food and even less rest. The training environment allows soldiers to adapt, so they are ready when “being harder to kill” really matters.

At no time during selection of the world’s most elite fighting forces do they suit up a double ply, belt, and wraps and test who has the highest 1RM back squat.

I’m not trying to demonize strength training. A basic level of strength is required for most endurance activities. I also believe that chasing large 1-rep maxes outside of specific sport preparation is a lousy definition of functional strength training. Even on the rare occasion that maximal strength becomes relevant in the real world, you’re unlikely to encounter a handy 28mm knurled diameter that works perfectly for your grip. In this respect, I commend those who know their own ability when it comes to farmer’s carries or fat bar deadlifts. At least these lifts serve a function, even if they are still contrived and artificial.

At some point early on in our hypothetical zombie outbreak, the need to eat will arise. If you take your nutritional advice from the experts of Instagram, you’re probably not going to make it. A common trend among athletes is to consume more and more calories in order to get lean. This is the exact opposite of efficiency.

Consuming food in abundance to fuel specific efforts may improve top-end performance, but it also makes our bodies expensive metabolically.

All the time you spent “stoking the engine” and “feeding the machine” will have turned you into a pathetic waste when it comes to survival. You have all but turned off your body’s ability to conserve energy, and in doing so reduced the amount of work you can do without fuel. Survival is dependent on limiting exposure to nature, finding water and food sources, and rationing that source for as long as possible. Survival is rarely about confrontation with an opponent. That illusion is only true if you realize the opponent is yourself. In this respect, survival and training for physical fitness are the same.

Endurance is key to surviving the apocalypse. Being able to travel far, fast, and on little fuel could be the difference between making it out of a crowded cannibalistic city and watching your stomach skin get turned into a lampshade by a depraved, diseased roommate.

If your goal is to be harder to kill, you should weigh less, consume less, and try your hardest to remember that splint wrap technique from your sophomore sports medicine class.

It shouldn’t surprise anyone that the average male special operations somatotype is around 185lb. If you need more convincing, consider this: the strongest humans are usually some of the biggest, which means they require the most food and the most time to move. A slower target is an easier target. Bigger people are also an inconvenience when they are injured. It seems really cool to be the “big guy” until you twist your ankle and the group responsible for carrying you starts debating on how important you really are. Should they use a crockpot or an open spit to roast your well-developed glutes?

How should you train for the end of the world? Learn to go very far, on very little fuel.

Survival Is Not a 6-Minute AMRAP

Someone will no doubt throw out, “CrossFit trains you for the unknown and unknowable!” I have no problem with this idea, except that I’m pretty sure our species never survived the past 200,000 years because of their ability to do butterfly pull ups.

Survival efforts are sometimes longer than eleven minutes, which is the length of an average CrossFit workout.

You can probably count on one hand the number of times the CrossFit main site has prescribed efforts over ninety minutes in the past decade. If the unknown is a 50km trek with weight, the average CrossFitter might have hedged their bets incorrectly on overhead weighted pistols.

The Slowest One Gets Eaten

The biggest question to answer in determining your chances of surviving the zombie apocalypse is this: How much of your training is actually functional, and how much of it is a joke?

This is not a defense of “cardio bunnies,” nor an op-ed to bash strength training. What it might be is a fantastical look at the most basic human movement: the ability to run far, fast, and efficiently. When you consider the functional aspects of training that are also major constituents to survival, it becomes obvious that running is one of the biggest. No other human ability enables you to escape the terrifying attacks of deranged mega fauna.

So next time your friend or gym partner complains that running hurts their knees and they are opting for the elliptical or a Venice Beach-style workout, you can smile and know there will be one more piece of human fodder that can be put between you the approaching zombie horde. You don’t have to be the fastest, but you sure as shit can’t be the slowest.