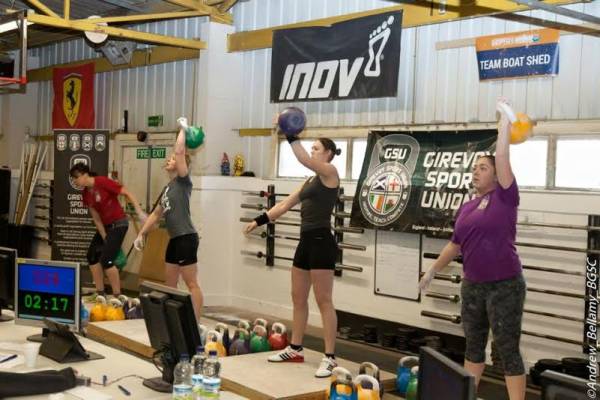 One of the reasons I love kettlebell sport is because it is truly inclusive.

If you have ever watched a kettlebell sport competition, you know that it is endurance weightlifting. The kettlebells are jerked, snatched, or cleaned and jerked for ten-minute sets.

It is likely you also noticed a few other peculiarities:

The age of kettlebell sport athletes spans thirteen to over fifty years old.

I have seen this trend in many countries. Nowhere was it more obvious than in Hamburg at last year’s IUKL (International Union of Kettlebell Lifting) World Championships. The youngest lifter among the five hundred men and women competing was thirteen-year-old Rylee Reeves from the USA, and the oldest lifters in the senior category were Russian gentlemen in their seventies.

I truly believe kettlebell sport, (or girevoy sport as it is known in Russia where it originated) to be the everyman, or everywoman, sport. Anyone willing to dedicate time and effort can become proficient in this great sport, regardless of age, gender, and athletic background. Here are the reasons why:

Kettlebell sport is attractive to a wide population as it has a relatively low level of injuries compared to other strength sports. This is due to the nature of the sport itself. The weights used are not maximal. The heaviest weights used are two 32kg kettlebells for professional-level male lifters. These are not an easy feat to lift for ten minutes at a time, but nowhere near as heavy a load compared to Olympic weightlifting, powerlifting, or strongman. The emphasis is on endurance and volume, so the lifting techniques are developed around extreme efficiency and relaxation, and tend not to stress joint and connective tissues too much.

“Anyone willing to dedicate time and effort can become proficient in this great sport, regardless of age, gender, and athletic background.”

This means a kettlebell athlete’s career can begin as young as thirteen (although there are children much younger than that giving it a go already). This career can carry on almost indefinitely. Or indeed, as often happens, older athletes can enter the kettlebell sport world and still do well. This is provided good technique is being used in all the lifts, and progression through the weights is slow and steady.

Taking part in kettlebell sport has undeniable positive effects on health. The sport develops a strong cardiovascular system. It increases muscular strength and strength endurance. It can also help speed up metabolism and reduce body fat.

In addition, there is a great emphasis on the strength endurance of the back and legs and also on overall flexibility, so in many cases this type of training improves posture and decreases the occurrence of chronic back pain.

It is easy to get started with kettlebell sport. The variety of weights used in comps, especially at national level, means most people will be able to give it a shot, even with a relatively short period of training. Women can begin with 8kg kettlebells and men will usually start off with the 16kg bells. These weights progress in jumps of 4kg until reaching the limit of the professional categories – 24kg for women and 32kg bells for men.

As sports go, kettlebell lifting won’t burn too much of a hole in your pocket. All you need are the competition-style kettlebells (which are generally supplied by the gym or club you train in, unless you are going at it solo) and, optionally, a pair of tennis wristbands, a pair of weightlifting shoes, and a weightlifting belt.

“Even spending an hour or two with the top-level athletes and coaches who regularly come over from Russia to teach will set you back very little. Especially when compared to learning from good coaches of similar levels in other sports.”

The biggest expense is probably travel, as you will need to make your way around Britain (or the world, if you have such ambitions) to compete regularly. I have seen a lot of the country thanks to this, so I find this aspect quite pleasing.

5. Body Type Is Not a Hindrance to Greatness

A great number of sports require a certain kind of body shape to excel. Basketball players need to be exceptionally tall, people with long arms are well suited to swimming, shorter body types have an advantage in gymnastics, and so on.

But if you look at the top athletes in kettlebell sport, you will find it hard to single out one particular body shape. Some are muscular and powerfully built, some are short, and some are tall and remarkably thin. The reason for this is that for each individual, a good coach can hone the lifting techniques to make them efficient to each athlete’s own unique proportions.

If you look at the top athletes in kettlebell sport, you will find it hard to single out one particular body shape.

In this sport, we are eternally students – there is always something that can improve us, giving us that extra ease of execution, and that extra rep. There is so much more to it than just standing on the spot lifting a weight for time.

“You must become a master of your own thoughts and feelings to be able to endure and perform during ten minutes of increasing and painful fatigue.”

For starters, consider timing, balance, and speed of execution. Then, there are breathing patterns, relaxation techniques, and positional issues. So many areas to be worked on in the constant search for better, more efficient technique. There is also the sheer physical aspect, working on strength, endurance, cardiovascular fitness, and flexibility.

And what about the mental aspect? You must become a master of your own thoughts and feelings to be able to endure and perform during ten minutes of increasing and painful fatigue. With so much to think of it is not possible to grow bored.

This is one of the aspects I love the most. Most of the comps I have taken part in, either as an athlete or as a spectator, have had a friendly and relaxed atmosphere. This includes the World Championships, where ties of mutual respect and friendship were forged among lifters of so many different countries and backgrounds.

“The kettlebell sport community has grown throughout the years and it always nice to see old and new faces enjoy the friendly atmosphere every time an event is held.”

A great deal of this comes from the fact that the one true competitor you have on the lifting platform is yourself. Sure, you will be up against other athletes. However, the one person you are really trying to beat is the person you were the last time you chalked up your hands and walked out in front of your judge.

All lifters know the effort and sacrifice it takes to be on that platform and so respect each other’s efforts. The kettlebell sport community has grown throughout the years and it always nice to see old and new faces enjoy the friendly atmosphere every time an event is held.

Most of the comps I have taken part in have had a friendly and relaxed atmosphere.

If you are feeling inspired and thinking of getting involved in kettlebell sport, want to make a positive impact on your conditioning and general health, and would like to be part of a community that is growing rapidly, there is no time like the present to make the leap.

Whether you are simply looking for something different to test yourself with, or want to go all the way and represent your country at an international event, all you need to do is be open to finding a reputable coach, working with a team, and being prepared to work hard and have fun. I hope to see you on the platform someday.