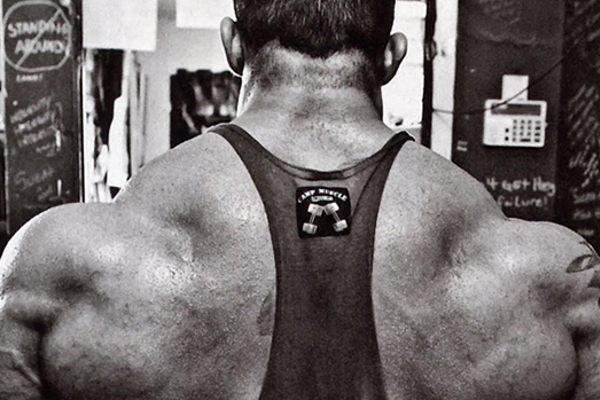 Abs Are Overrated
Abs have become a status symbol. But abs just represent the physical manifestation of an energy deficit. You want abs? Eat less until abs appear.

It’s slightly more complicated than that, but at the heart of it all, not really.

You may think abs represent a healthy body, but abs aren’t always achieved through health or hard work. You can easily find pictures of anorexics, bulimics, and drug addicts sporting abs. But I don’t think you’ll be seeing the “meth-head core routine” popping up in the near future.

People can have abs who don’t train at all. They’re just genetically blessed to carry a lower percentage of body fat. No work, no dieting, no cardio. Abs for days.

Make no mistake, I think abs are cool too. But dieting alone can get you a set of abs without ever setting foot in a gym or weight pit, which is why traps are a far better representation of hard training.

Escape From Team No-Traps
Traps are the physical manifestation of hard work. Yes, you could build enviable traps without ever hoisting a barbell, but not without a lot of hard labor.

Massive traps are obvious regardless of clothing. Abs? Not so much. In fact, you can meet a lot of people that get social media attention because of their abs, but in-person wearing clothes, you can’t even tell they lift. That’s a travesty.

Some people like what they like. That’s fine. Some people also like smelling other people’s urine in a dark alley but that doesn’t make it cool.

Lots of hard-working lifters are trap deficient. I was a member of Team No-Traps for a long time myself. It drove me nuts. I did all the regular shit everyone says to do in order to get big traps, and it just didn’t put traps on me.

And that’s about where the line ends for those predisposed to growing traps easily. The “just deadlift and shrug, bro” people are usually those with short clavicles, short necks, and narrow shoulders. They can do some deadlifts and some ultra heavy shrugs and their traps grow immediately.

Those on Team No-Traps often have broader shoulders and longer clavicles, making it much more difficult to build a set of traps that appear impressive. There are exceptions to these rules, but this has been my standard observation.

Simply relying on shrugs and deadlifts is just not enough to build an impressive set of traps for most guys anyway. Shrugs are awesome for developing the upper part of the traps, but if you want a set of traps that looks like a couple of hams on your back, you can’t neglect the mid and lower traps and the rhomboids.

I’ve gone through about every movement known to man in order to escape from Team No-Traps and I’ve found a few movements that will put traps on virtually anyone.

Twice-a-Week Trap Training
If you’re trap deficient, train them twice a week and not as an afterthought. That means traps get two days a week to themselves for the most part.

Why not? You want big traps, right? Give them some love a couple of days a week and they will love you back. Here are the movements that work best to get out of no-trap hell.

This may be why heavy shrugs don’t work for a lot of lifters. There’s not enough time under tension.

Do these with dumbbells and seated using a cambered bar – the kind with the curve in the middle so that it won’t hit your hamstrings when you shrug it up.

You’ll get a more intense contraction with these than dumbbells, but your mileage may vary. Do both during the week for 4 sets of 12. Don’t sweat the weight as much as making the contraction as painful as possible.

Dumbbell Lawnmowers
It’s like a one-arm dumbbell upright row, but done in an explosive fashion.

You’ll feel like the motion is similar to trying to start a difficult lawn mower. Lean forward a bit, then really explode the dumbbell upwards. You could pyramid up to a top set of 8, but higher rep sets of 15 or more work better.

Front Plate Raises
Use a 25-pound plate and raise it over your head. Lots of people do these and just raise the plate or dumbbells to eye level. Bringing it all the way overhead will bring the traps and upper back into action.

The reason I use a 25-pound plate is because I always do 100 reps. When you use a 45 you can’t do as many consecutive reps. And they’re not as productive as the ultra high-rep sets.

Plus when you fatigue from using a 45 you may naturally bend your arms too much. Keep only a slight bend in the elbows. Don’t hammer-curl it up.

These hit the top of the traps and the rhomboids.

Press Behind the Neck

The key is to drop the shoulders down hard. If you try this without any weight at all you should feel the mid and lower traps kick in hard.

This is my pet movement, and it’s effective at building thicker lower traps. You’ll probably get sore down in that area after a high volume day of these.

Kettlebell Upright Rows with a Rope

Essentially you put a rope through the kettlebell handle and do upright rows with it. Again, use higher reps here. Do sets of 15-20.

Bring the rhomboids out to play with these. Do these last after your other trap work.

When your traps have already been activated, you’ll feel them in the right place. If you do them first, you may feel it more in the shoulders, and you’re not using them for that.

Squeeze the mid traps together and get a hard contraction. Do 4 sets of 20 with the same weight, concentrating on the contraction and not worrying about going too heavy.

The Workouts
Here’s how to put all of these together in order to build pure-sex tyrannosaurus rex traps.

Note: These workouts don’t replace all back work. You still need to do your other back training like dumbbell and barbell rows. The Hammer Strength low row hits the mid and low traps very hard, and that can be worked into all of this to add to your trap work.

I’ve gone from captain of Team No-Traps to having a set of traps good enough to crusade for the “traps are the new abs” movement. And you can join me.

Lady traps are sexy too. So if you’re a chick and are a member of Team No-Traps and want lady traps, then this will work for you too.