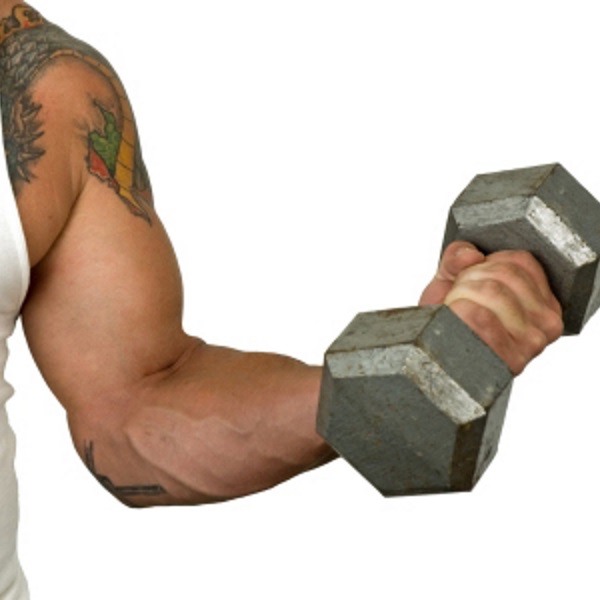 You’re a bodybuilder, but you can only train with minimal weights because of an injury, and you’re worried about your muscle mass. Is that your problem? Then sports scientists at the University of Copenhagen have good news for you. Even if you can only train with minimal weights that’ll help you to retain some of your muscle mass, the Danes write in an article that will soon be published in Clinical Nutrition. At least, it will if you consume enough protein.

Big weights, small weights
In 2008 the Danes made a discovery that strength athletes would probably react to by saying ‘but we already knew that’. [J Appl Physiol. 2008 Nov; 105(5): 1454-61.] The researchers got their subjects to train their quads on a leg-extension machine for 12 weeks. The men trained their one leg with sets using 70 percent of their 1RM [Heavy] and the other with 16 percent of that weight [Light].

We copied the figure below from their study. It shows the circumference of the subjects’ quads before and after the 12 weeks. The heavy training had more effect than the light training.

The heavy training resulted in a 7.5 percent increase in muscle circumference; the light a 2.5 percent increase. The latter figure intrigued the researchers. Apparently training with very light weights also helps muscles to grow. And that’s of interest to people who want to retain muscle mass, but for one reason or another can’t train with heavy weights.

Study
In 2013 the researchers published the results of a study in which they examined the relationship between protein supplementation and light strength training. In this study the Danes used 10 males in their twenties as subjects. They got the men to train one leg on a leg-extension machine, using weights at 16 percent of their 1RM, early in the morning. For each exercise they did they did 10 sets of 36 reps. Between sets the men paused for 30 seconds. The other leg did nothing.

For ten hours after this lopsided workout the Danes monitored the production of muscle tissue in the men’s quadriceps. They were also given a small protein shake, at first every half hour and later once an hour. In total the subjects consumed about a dozen shakes, and a total of about 65 g protein.

Results
The figure below shows that in the non-active the anabolic effect of the protein supplement disappeared after eight hours, but in the leg that was trained it was still present ten hours after the workout.

Conclusion
“It should be acknowledged that heavy load exercise is the most potent exercise-stimulus to increase muscle protein turnover and muscle accretion”, the researchers write. “The phenomenon that resistance exercise-type light-load contractions is sufficient to improve the muscle sensitivity to protein feeding, may lend support for a muscle mass preserving effect.”

“The results could be relevant for hospitalized or partly immobilized patients, who could be hypothesised to attenuate muscle atrophy by completing brief light-load contractile activity combined with protein-supplemented diets.”