Is it really bad to drink that whey shake before you eat the bananas, strawberries and blueberries, because whey makes you insulin resistant? Sounds “bogussy” and a closer look at the questionable methodological choices of the scientists who conducted the study don’t make the results sign. more credible.

In the fitness community, whey protein is the #1 on the “must have supplement” list. Multi-vitamins? Creatine? Who cares, as long as you get your 30g of whey per day, you’re good… really? One of you recently send me a study that would suggest that “good” is not exactly the right word to describe the effects of whey protein on at least one out of the set of well-established parameters of optimal metabolic health: Your muscles’ insulin sensitivity.

In the paper that has been published in the reputable scientific journal “Diabetes”, Gordon I. Smith and colleagues describe an experiment the results of which clearly suggest that whey doesed at 0.6g/kg fat free mass has a sign. insulin-desensitizing effect in twenty-two sedentary (<1.5 hour of exercise/w) and weight-stable (<2 kg change for at least 6 months), 50-65y old postmenopausal women who participated in this acute response study.

Less Fat, More Muscle! Acute response? Yes, there it is, the first in a line of problems that reduces the significance of the results. After all, testing the acute response to a certain health cannot tell you anything about the long-term effects on said parameter… especially if your subject group due to being sedentary and in an age where the parameter in question is deteriorating, anyway.

But let’s not be the “it’s not bros, so it’s not valid for bros”-guys. Let’s rather take a look at (a) the procedures and (b) the results and make up our minds later. And let’s first take a look at a handful of important parameters of the study design: To determine the insulin sensitivity, the scientists used two hyperinsulinemic-euglycemic clamp sessions with the subjects being randomly assigned to do the procedure with vs. without whey protein first.

“Before each clamp procedure, subjects were instructed to adhere to their usual diet and to refrain from vigorous physical activities for three days. Subjects were admitted to the Clinical Research Unit in the late afternoon, where they consumed a standard dinner between 1800 and 1900 h, and then fasted, except for water, until the next morning. At 0600 h, a catheter was inserted into an arm vein for the infusion of a stable isotope labeled glucose tracer; catheters for blood sampling were inserted into the radial artery of the opposite arm and in retrograde fashion into the femoral vein of one leg. At ~0645 h, a primed, constant infusion of [6,6- 2 H2]glucose (priming dose: 22 µmol·kg body wt-1, infusion rate: 0.22 µmol·kg body wt-1·min-1), purchased from Cambridge Isotope Laboratories Inc. (Andover, MA), was started and 4 h later the hyperinsulinemic-euglycemic clamp procedure was initiated with two 5-minute priming doses (first 200 mU·m-2 body surface area (BSA)·min-1 then 100 mU·m-2 BSA·min-1) of human insulin (Novolin R, Novo Nordisk, Princeton, NJ); for the remaining 230 min, insulin was infused at a rate of 50 mU·m-2 BSA·min-1. Euglycemia (at blood glucose concentration ~5.6 mM) was maintained by variable rate infusion of 20% dextrose (Baxter, Deerfield, IL) enriched to 2.5% with [6,6-2H2]glucose” ().
During the “whey trials”, the subjects consumed 0.6 g of whey protein (unflavored Unjury®, ProSynthesis Laboratories, Inc, Reston, VA) per kg FFM dissolved in 360 ml water or the same volume of water alone. In addition, the researchers conducted a trial in which the subjects consumed the same amount of leucine. 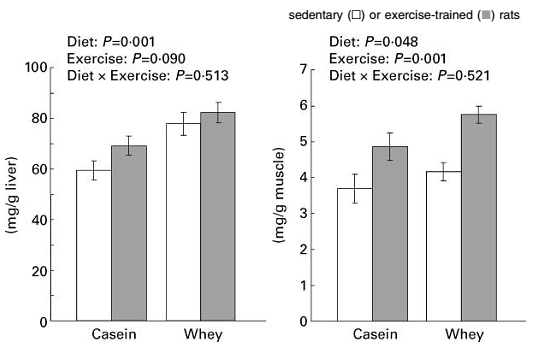 Whey protein alone is gluconeogetic alone to increase the amount of glyocogen in liver (left) and muscle (right) of sedentary rats even if they don’t eat a single ng of sugar or carbs (Morifuji. 2005). If you ignore the proven gluconeogenic effects, you must not complain if someone calls your study results irrelevant.
To understand the full “bogus” of the study at hand, you have to understand what a hyperinsulinemic-euglycemic clamp does. And you’re lucky, it’s not very difficult: The whole procedure is based on acutely raising a person’s insulin levels to 100 μU/ml by continuously infusing insulin. The insulin levels are then kept constant, while just enough glucose is infused to keep the plasma levels of glucose stable. Higher rates of glucose infusion during the “clamp test” thus indicate a greater effect of insulin on glucose clearance and thus higher levels of insulin sensitivity. Now the bogus in this case is that it is (a) questionable how useful it is to compare a non-caloric to a caloric (and gluconeogenic) beverage with this test and (b) to ignore that part of the proven benefits of the caloric beverage you test are based on its ability to increase the same insulin levels you’re keeping stable, anyway… not to speak of its effects on satiety. What? Yeah, I call that bogus.

To figure out if any effect they would observe was induced by whey, i.e. a complex protein, or just the most-applauded whey ingredient, i.e. leucine, the scientists ran a follow-up test (1-4 weeks later) in which the subjects consumed either 0.0684 g/kg FFM of pure leucine (that’s equivalent to the amount of leucine in the whey protein) dissolved in 360 ml Kool-Aid® (Kraft 94 Foods, Inc, Northfield, IL) or the same volume of the Kool-Aid® solution alone during the clamp procedure. I don’t have to tell you that this was a mistake that makes the results of this follow-up useless for comparisons to the previous trial, in which the whey protein was mixed with water – Kool-Aid is after all all-carbohydrate – with 0.9g carbohydrates per ml of junk… ah, I mean per ml of the soft-drink.

Figure 1: Clearance of glucose during the hyperinsulemic clamp for the whole body and the legs (Smith. 2015). It is noteworthy that there control vs. active treatment signalling protein response (mTOR, p-AKT, ACC, etc. – not shown in figure) did not show differences that could explain the alleged negative effects of whey on glucose uptake (see Figure 2).

This does not mean that we couldn’t use the data from the leucine trial, at all, though. But let’s be honest, who cares about the non-significance of the effects of a non-gluconeogenic amino acid (meaning that leucine cannot be converted to glucose by the liver) if you cannot compare them to the significant decrease in insulin-mediated glucose disposal (38.8 vs 51.9 µmol glucose per µU insulin/ml / min; P<0.01) the scientists observed in the whey condition, because the test was messed due to the use of a different and by no means “neutral” control?

Rather than as a basis to argue that whey is bad and leucine is good, you can use the Kool-Aid glitch and the fact that leucine cannot be converted to glucose in the liver to substantiate the following hypothesis: If the scientists had accounted for the gluconeogenic glucose load from whey when they tested their allegedly sugar-free (manufacturer claim) whey protein vs. water in the previous trial, they would probably have found no significant effect of whey protein on muscular glucose uptake, because the test wouldn’t have been unfairly thwarted in favor of the water control which came without the additional glucose load from the whey-induced gluconeogenesis in the liver.

Figure 3: Both, acute and chronic realistic and thus relevant studies show beneficial effects of whey on glycemia (Petersen. 2009) and insulin sensitivity (Pal. 2010) – you decide which studies to trust 😉

Plus, even if we assume that this hypothesis wasn’t true (I am pretty convinced it is), the results of the study at hand would still be an inexplicable artifice that stands in stark contrast to the well-proven multi-facetted acute and chronic beneficial effects of whey protein on glucose- and weight-management in healthy, diabetic and pre-diabetic individuals (Layman. 2004; Frid. 2005; Peterson. 2009; Akhavan. 2010; Pal. 2010) – effects of which no one ever claimed that they were mediated by acute increases in muscular insulin sensitivity, by the way; and that despite the fact that the data from Pal (Figure 3, left) clearly indicates that these benefits occur in the real world.

Dairy or eggs? Why not just mix dairy and egg protein or dairy and eggs – A similar protein mix exerts most promising effects on anabolic signalling proteins related to increased muscle mass and fat loss, as the results of a study show | read more
What’s the verdict, then – true or false? True. In the unrealistic and unfair comparison Smith et al. conducted, whey protein is inferior to water with respect to its effect on the post-menopausal body’s ability to clear intravenously infused glucose from the blood stream.

What is yet more important is that the overall message the study and the half-sentence “protein ingestion causes insulin resistance” (Smith. 2015) from the abstract are sending are false: In fact, the study at hand doesn’t allow for any reliable conclusions with respect to either the long-term or acute real-world insulin sensitizing or desensitizing effects of whey protein, because the scientists used a method that does not account for extra glucose that is produced in the liver during the testing procedure via gluconeogenesis (I know that high insulin levels reduce gluconeogenesis, but they won’t shut it off).

Against that background and in view of the existing data from dozens of practically relevant clinical trials which indicate that whey will have positive, not negative effects on glucose metabolism, it would appear foolish to cite use the study at hand to argue that the cosumption of whey protein may ruin your insulin sensitivity and “too much whey today” may turn you into a type II diabetic tomorrow | Let me know what you think on Facebook!