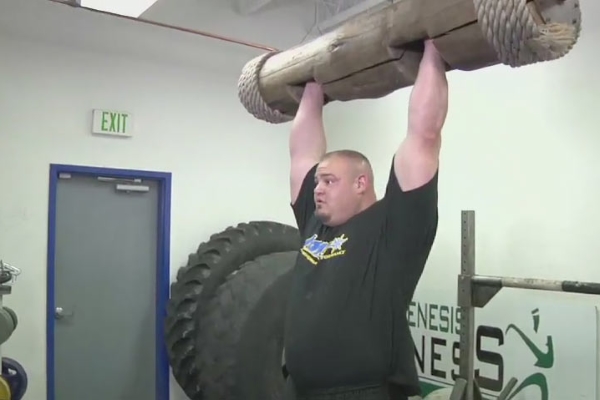 With big-time wins earlier this year at the Arnold Strongman Classic in Ohio and the World’s Strongest Man competition in Malaysia, Brian Shaw has established himself as the top strongman athlete in the world. The 33-year old Shaw, who started his strongman career in 2005, is now a two-time Arnold Classic and three-time World’s Strongest Man champion. Here, he serves up the training and nutrition programs that have made him, well, one superstrong dude!

If you want to be the world’s strongest man, you’re gonna need a place that has a lot of weights and specialized equipment. To ensure he had all that he needed, Shaw built his own gym, which is 2,000 square feet and uniquely his own.

“My gym has an intense vibe,” Shaw states. “Even before you enter there are a bunch of Atlas stones in the parking lot beside the door, so you know it’s not your average gym.” Inside there are the typical pieces of equipment you’d expect in a strongman’s training facility: a squat rack, bench press, and deadlift platform, as well as a pulldown machine, cable row, and dip bars.

Upon closer inspection, experienced lifters will notice that several pieces of equipment have been altered to Shaw’s specifications. “On my pulldown machine I’ve modified the bar with grips at various widths,” Shaw says. “It looks kind of like a ladder, thereby allowing me to grip it at different widths so I can target different areas of my back. And the bar is three inches in diameter, which helps increase my grip strength. After doing a set with this monster, your fingers are killing just from gripping the bar—and the pulldown bar at your local gym seems like a toothpick!”

Having a plethora of tools handpicked for strongman is crucial for event training. These include various size beer kegs, which he uses to train for the keg throw and keg walk. His Atlas stones and various-size circus dumbbells are also custom made; the latter are used for one of the most exciting events at the Arnold Strongman competition.

“Every year I have to get a new dumbbell made because they keep increasing the weight with every competition…and that’s because competitors keep smashing the record for reps!” he says. “It’s going to get to the point where they’re going to need an entire crew just to roll the thing out onstage.”

The Austrian Oak Press is another fan favorite. Shaw trains for it with replica logs. He offers a word of caution to aspiring strongman competitors unfamiliar with the coordination involved in the lifts: “All the strongman events are dangerous, so you have to know exactly what you’re doing. For example, with the log press, not only do you have to lift it off the floor, you also have to balance the log, which is over two feet in diameter at the ends, on your chest before you press it. It can really put a kink in your neck if you’re not careful.”

Shaw’s love for the gym dates back to his college basketball days at Black Hills State University in Spearfish, SD. Attending on a full basketball scholarship, it was there that he got hooked on training. Always exceptionally strong even before he started lifting, Shaw began spending a great deal of time in the weight room. The rest, as they say, is history.

Along with strongman-specific training, Shaw does a “normal” training routine consisting of basic, free-weight compound exercises like squats, deadlifts, bench presses, barbell rows, and even dips. He will also use a wide variety of machines to target specific muscle groups. “I need to keep my body in top shape like any other athlete,” he explains. “So I do so-called ‘bodybuilding’ movements for base strength and fitness. You don’t see someone in the NFL just training on the field; they hit the gym hard, too.”

Shaw follows a four-day training split: Monday, he hits legs. Tuesday is chest, shoulders, and triceps. Wednesday is a rest day. Thursday is deadlift and back training. Shaw does not train on Friday. “That’s date night for me and my fiancée,” Shaw explains. “I have to make time for myself and my loved ones—all work and no play makes me go crazy!” Saturdays are for eventspecific training (see box at right), and Sunday is a final rest day to help his body fully recover before he starts a new week of training.

Saturday’s training session can vary, depending on the events he is working on. Here’s a sample Saturday spent focusing on the Log Press, Farmer’s Walk, and Atlas Stone events. Prior to doing any of these lifts, Shaw warms up with a lighter weight to prepare the muscles and avoid injury.

The final event is the Atlas Stone. Shaw lifts a light stone up to a platform (or over a bar) for a few reps to warm up. He then works up in weight, doing 2-3 reps with each stone. Once he reaches the stones he will do his working sets with, he does 2-3 sets of 5 reps if he is lifting them over a bar. If he is using a series of platforms, he will do a five-stone run. Typical stones weigh between 225-500 pounds.

To keep his 6’8″, 430-pound body running at optimum levels, Shaw eats an average of 10,000 calories a day, spread out over seven meals. “I need to get enough protein in me to grow and stay strong,” Shaw says. “My favorite meal is grass-fed beef, but I do switch up my protein sources—everything from salmon, eggs, chicken, turkey, to bison.” Along with the wide variety of protein choices, Shaw also takes in plenty of pasta, rice, potatoes, fruits, and vegetables. “You name it, it’s pretty much part of my diet,” he chuckles. “I eat pretty clean, and weigh out exact measurements for each meal that my nutritionist sets out for me. I’ve also gotten pretty good at eyeballing portions when I’m unable to weigh my food, like when I’m on the road.

Shaw works hard to maintain a constant intake of calories throughout the day to feed his muscles to keep him as strong as possible. “Think about it, how can you compete with the best strongmen in the world, like Zydrunas Savickas and Hafthor Bjornsson, and win if you don’t follow a proper nutrition schedule?” Shaw says. Due to his size, Shaw burns off more calories walking around than some people do training two hours in the gym. “I have to eat constantly,” Shaw says. “If you want to become a strongman, this is key.”

Proper supplementation before, during, and after training, in addition to in-between meals, keeps the flow of nutrients into Shaw’s muscles. “The secret to strength is making sure you’re always in a state of healing and growth,” Shaw says. “You can’t have a kick-ass workout and then not supply your body with what it needs to repair itself and grow. That’s ass-backward, and you’ll never advance in strongman training, bodybuilding, or whatever sport you do. You’ll actually hurt your gains and make yourself worse off than when you didn’t train at all!” Shaw’s favorite supps include MHP’s Up Your Mass, Power Pak Pudding, and Dark Matter.

Being the world’s strongest man has numerous perks: fame, fortune, and the right to lay claim to a pretty cool title. But one stands out as being especially cool: “I get to hang out with Arnold!” which means that Brian Shaw may literally be his biggest fan.