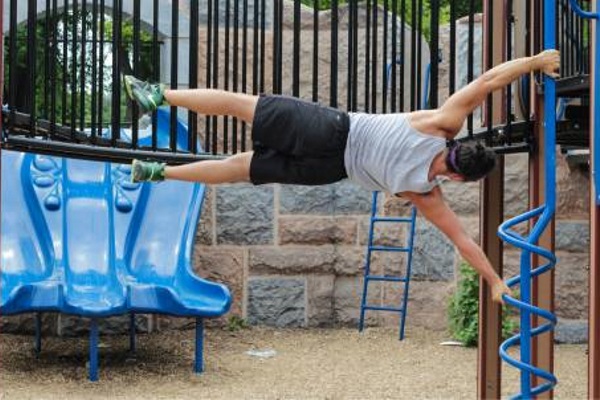 It currently seems like there is an all-or-nothing view on how to get stronger. Folks who prefer bodyweight or gymnastics movements shun the barbell or anything that isn’t street workout style. Traditional lifters consider anything involving less than 200lbs to be some form of Pilates or yoga.

It’s a shame, because you actually gain maximum benefit from utilizing both of these different styles of progression. The name of this game is motor learning.

The most common definition of motor learning is “the process of improving motor skills resulting from practice or a novel experience, with long-lasting changes in the capability for responding.”

This process of motor learning happens in three stages.

The basic idea here is that in learning a movement, initially it requires a great deal of focus to complete the task. As you progress into the later stages, the movement requires less and less brain power to perform. Michael Jordan doesn’t have to think his way through a basketball shot anymore.

“Taking an athlete through a progression of skill will yield a better-rounded, better-coordinated athlete.”

However this can be a double-edged sword. We want to achieve mastery (and be autonomous), but we need to constantly challenge our brains and bodies with new stimulus in order to achieve maximum well-rounded growth and potential. So you want to build upon the things you already know and refine the skill of the basic movements while at the same time continuing to challenge yourself with new movements.

There is value to handling more weight with the most advantageous joint positions. There is huge potential for adaptation and overall strength gains if you can move the greatest amount of weight. There is a reason that picking up a heavy weight off of the ground yields massive benefits to the entire body.

“When the lines of stress are always the same, you overstress some areas and understress others. This lack of balanced loading on joints and tissues is a likely culprit of overuse injuries.”

If your goal is specific, the lion’s share of your training should be practicing that specific skill. No amount of gymnastics training is going to prepare you to have the biggest bench press as well as bench pressing.

Taking an athlete through a progression of skill will yield a better-rounded, better-coordinated athlete. Imagine if along the way to getting strong, the athlete progressed through push ups, dips, handstand walking, handstand push ups, l-sits, tuck planches, planches, and planche push ups. The result would be a highly coordinated, adaptable athlete who would be infinitely more capable of a wider variety of movements whether in a training or competition setting. In summary, there is value to both methods.

According to Wolff’s law and Davis’ law, your tissue and bone remodel in accordance with lines of stress. When the lines of stress are always the same, you overstress some areas and understress others. This lack of balanced loading on joints and tissues is a likely culprit of overuse injuries.

“Don’t be silly and get married to heavy weights or to gymnastics or street workouts only.”

Imagine you are sanding a board. The goal is to refine the texture and make it nicer. However, if you continue to only sand in one line, that part of the board will get worn down over time. This is another advantage of progressing to more complex skills that have a more well-rounded stress on the joints and tissue.

One way to address the differences and reap the benefits of these two roads to strength would be to cycle from one to the other. Because adaptation is highly dependent on frequency, I don’t like to lay off any one type of training for too long, so we are going to alternate workouts between the progressive load model and the progressive skill model.

In the first workout we might do an array of gymnastics movements. For example, this video shows how to progress skill for upper body push movements and upper body pull movements:

For an upper body push movement we could start at an easy wall supported push up, progress to a push up on the floor or rings, then to a ring dip, and eventually to a tucked planche on the rings and beyond.

For an upper body pull movement we could start with an inverted row, progress to pull ups or chin ups, and then onward to skin the cats, muscle ups, and front levers.

In the next workout we would focus on moving the most weight possible:

You Can Have Both

By doing both types, we increase our movement base as well as our strength base, giving us all of the benefits of each. Don’t be silly and get married to heavy weights or to gymnastics or street workouts only. Learn how to move your body and smash heavy weights.