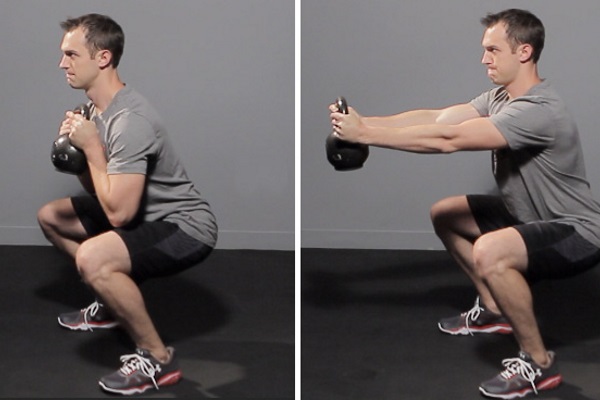 The Goblet Squat is a fantastic exercise for building lower-body strength and teaching perfect Squat form. But unlike the Back Squat and Front Squat, you can perform variations of the Goblet Squat that target your core.

This is only possible because you hold the kettlebell or dumbbell in front of your chest in the goblet position. You have freedom to move the weight with your arms, which is not feasible when you have a heavy bar across your back or shoulders.

Something as simple as performing a Curl in the squat position completely changes how the weight affects your body. As you lower the weight, it travels further from your center of mass, increasing the amount of torque you have to to resist. Your core works hard to stabilize and prevent your torso from tilting forward midway through the rep, when the weight is furthest from your body.

By training your core in a squat position, you provide a new challenge to your muscles. This is particularly beneficial for athletes, because they often have to stabilize and produce power from this position. A stronger core equates to a stronger and more powerful movement with less risk of injury.

Gentilcore also says that the Goblet Squat requires a more deliberate movement and improves core control in the squatting pattern, which in turn improves your technique and the ability to handle heavy weight loads.

Check out the video above to learn how to perform the Goblet Squat and Curl and a more challenging variation.

Traditionally, this is performed with just one Curl. It works your arms a bit, but the goal is not to build bigger biceps. However, if you feel inclined to work your arms in this position, try five Curls for each Squat. The isometric hold of the Squat will set your quads on fire.

Goblet Squat and Press
Since you press the kettlebell in front of your shoulders, the torque your body has to resist is actually greater than the Goblet Squat with Curl.