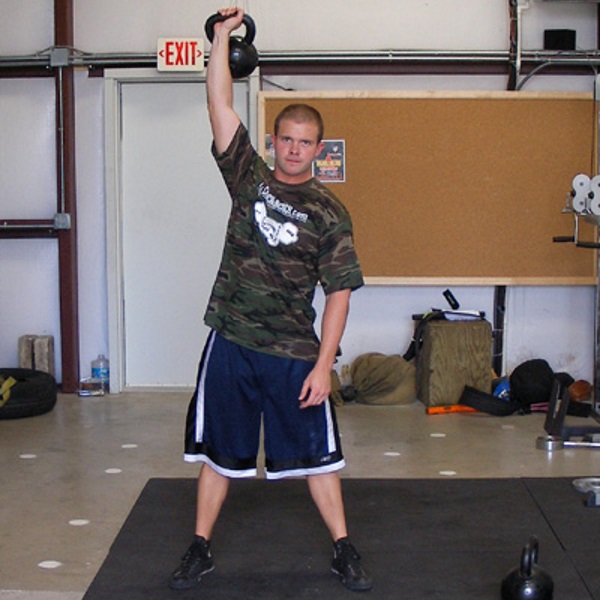 Kettlebell swings get all the attention, but diversity in investments is always a good thing. Swings develop the ability to project force in a horizontal plane and kettlebell snatches develop the ability to display force in a vertical plane. Both movements are excellent for building comprehensive strength, but combining them is a smarter investment than putting all of your money on swings.

Pavel Tsatsouline says in his book, The Russian Kettlebell Challenge: “The one-arm snatch is the Tsar of kettlebell lifts, fluid and vicious.” If you want to display power like a king and don’t already practice kettlebell snatches, now is the time to start.

Train to This Standard, But Don’t Stop There

Knowing how to properly snatch a kettlebell is another prerequisite for the strength and conditioning routine I am building for you. Last month, we worked on sledgehammer training. If you cannot snatch safely snatch a kettlebell, you will not be able to perform the program.

If you cannot do this, build your capacity over the next few months. This standard is only a minimum; if you can do more reps with a heavier kettlebell, you will derive even more benefit from the program.

The Tsar of Kettlebell Lifts
Mastering the one-arm kettlebell snatch will be an essential element to your new strength and conditioning program.

Girevoy, Hardstyle, or Both?

Some like to argue the merits of one style over another. I couldn’t care less, and here’s why:

I’ve done a ton of manual labor in my life. Throwing hay bales for hours requires settling into an efficient, sustainable rhythm. But sometimes in the middle of the job, a storm rolls in and suddenly it’s all hands on deck to stack the hay in the barn before it becomes waterlogged and three times as heavy. You not only have to work more efficiently, but also harder and faster. The workload just got condensed through greater intensity.

It is important to be able to snatch a kettlebell proficiently with both styles. Some days you feel like working on technique, and other times you want to up the ante and bust out power snatches. The greatest human ability isn’t our ability to specialize; it’s our ability to adapt and tackle many things well.

That said, for the purpose of the program I’m building for you, today we’re only going to cover the basics of the Hardstyle snatch.

As the kettlebell begins to pass in front of the legs, it should be above the knees as you snap the hips through. At this moment, start pulling up and back so the kettlebell transitions from an arc away from your body to a more vertical path. It will still arc up, but you are creating a tighter arc than in a swing.

Arm placement against your body is crucial to producing force in the snatch. At the bottom of the movement, your biceps are snug next to your pecs, triceps are snug against your lats, and your arms are lying right over your ribs. As you hip-hinge forward, you incorporate more upward leg drive than you do with a swing, transferring energy directly from the body, through the torso, and into your arm, which remains tight against your body.

You want to maximize this arm-body contact for as long as possible before pulling the kettlebell into an upward path. To transition the forward arc into a vertical high-pull, bend your arm at the elbow while continuing to leverage the biceps and triceps off of your body.

A common fault when snatching is letting your arm stay long, causing the kettelbell to make a big arc away from your body and come crashing down on your forearm. To tame the arc and keep the kettlebell close to your body, imagine a wall two feet in front of you. Don’t let the kettlebell hit the wall.

The snatch begins life as a swing, but the force is directed more vertically as the arm leaves the body.

It’s like the hang-time during a jump shot in basketball. This weightless feeling is your cue to push the handle around and in front of the bell of the kettlebell to guide it into place. When you do it right, it will it merely fall an inch to land safely on the back of your forearm.

When you feel the kettlebell start to float, that’s the time to put it on the shelf.

The kettlebell snatch starts as a swing, followed by a rapid transition into a high-pull, with just enough power to float the kettlebell into place. There are a lot of nuances that I did not cover, such as how to hold and position the kettlebell on the arm, the placement of the elbow, which way the palm faces, or how to drop the kettlebell. If you can’t find an instructor to help with these finer points, examine the pictures above closely and you’ll pick up on most of them.

The snatch is the king of the kettlebell moves. If you are not proficient, take the next few months to practice and work up to the minimum standard. Then you will be good to go when I reveal the complete program.