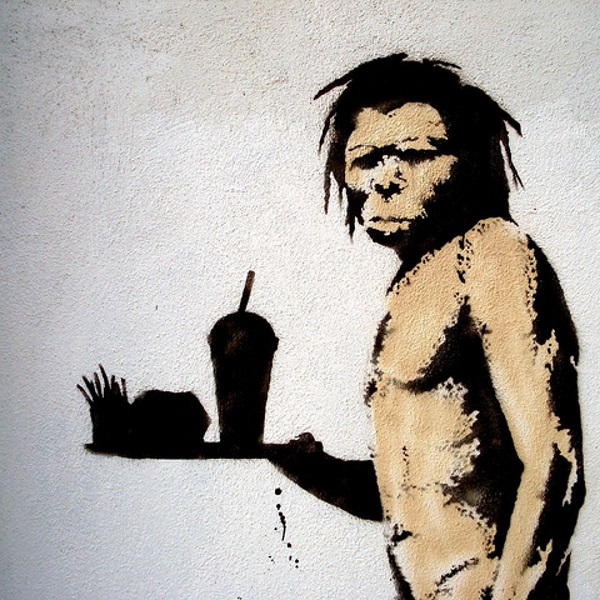 I got a new job in 2012, and with my first paycheck decided to hire a personal trainer. I remember going to the first appointment, being greeted by a friendly guy who was built like a stone wall. He asked me to perform as many press ups as I could, so that he could gauge my level of fitness.

I barely managed ten before collapsing to the ground red-faced. He gave me a look of faintly amused concern before taking me aside and laying out my new eating regime.

This was my first experience of the Paleo diet, made famous by the likes of Miley Cyrus and Matthew McConaughey. For brevity’s sake, it eschews all refined carbohydrates and wholegrains in favour of high-protein, high-fat foods, and minimises calorie counting. I was pointed towards Mark Sissons
books on ‘primal’ eating, as well as authors like this advising how best I could ‘make the change.’ Clearly, not eating carbs was something so grave as to be akin to changing your job, or getting a prostate exam.

I consider myself to be pretty open-minded, so I took to this new lifestyle without any preconceptions. I emptied my cupboard of cakes, chips, bread — all the foods that make life worth living. In went the coconut flour, coconut oil, dried coconut flakes and kale.

My new diet caused the weight to melt away. People began to notice, and I accepted the attention with a fair amount of smugness. I was privy to a new way of eating, the right way.

But inside, despite how I was beginning to look, I felt awful. I remember one day in work vividly. I had consumed about a kilo of broccoli, and my stomach moaned for mercy. I was so blocked up I had to leave sick, dashing home to spend the afternoon ‘preoccupied’ with some natural bodily processes.

This was bad enough, but the social stigma was worse. I was constantly defending the diet against a chorus of patronising onlookers who said that I was ‘taking things too far’, that I was ‘being too hard on myself’. Others questioned whether it was something that could really be considered healthy.

They weren’t the only ones to raise concerns. In late 2014, the British Dietetic Association advised against the diet, arguing that it was a surefire way to compromise your bone health (given the complete bar on dairy intake) as well as helping you to miss out completely on several important nutrients. This article in the Scientific American also casts doubt on the diets’ long-term feasibility.

Despite all the evidence and my own inner voice telling me what I knew to be true, I persisted with the diet for another few months, before suffering a spectacular Oreo-based relapse. My short, tumultuous relationship with low carb eating was finished.

As we move into 2016, the Paleo diet is reaching new heights. High-profile British celebrities like Jonathan Ross are well-known exponents of the diet. Jamie Oliver, the guardian angel of our dinner plates, has lobbied the UK government intensely for a sugar tax to help curb the nations intake. Having suffered the worst of Paleo’s side effects, I am a tad concerned about the prevalence this new way of eating is starting to enjoy in public life.

But my complaints should be viewed through the prism of individual differences. It is foolish to prescribe one way of eating to a populace that is as diverse as ours. We all react differently to foods and exercise, so people can decide for themselves what to eat.

Furthermore, the Paleo diet does get some things right. We should all be eating less and moving more, whilst the movement has encouraged a growth in proper home cooking with fresh, wholesome ingredients. It has also shone a necessary spotlight on the mind-boggling amounts of sugar in some of our best loved foods. Articles like this one from the BBC are part of a welcome move towards being mindful of what we put into our bodies.

The Paleo diet does have significant flaws, and I’m still suspicious of it ass a sleekly-marketed con peddled by a diet industry looking for its next big villain. We, as hungry for a weight loss shortcut as we are for Chinese takeout, are only too happy to swallow the high-fat, high-protein snake oil.