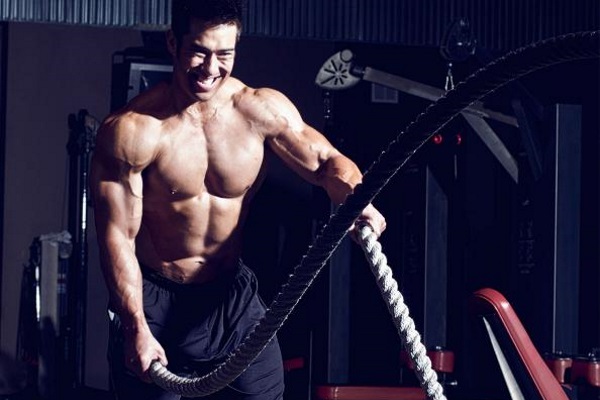 Whip yourself into shape with a muscle-toning, cardio-intensive workout.

Ropes are nothing new. Neither are battles. So it’s sort of surprising that one of the latest trends in fitness is an old-school piece of gear.

That’s right: After years of being confined to martial arts gyms and football training rooms, weighted battle ropes are finally entering the mainstream—and that means it’s time to add them to your fitness routine.

“Battle ropes offer full body strength training as well as cardio,” says Danielle Hopkins, a master trainer at Printing House Equinox in New York City and the creator of the gym’s popular Ropes & Rowers program. “They’re especially great for targeting your core and upper body, since those are your primary movers in battle rope training.”

Battle ropes are valuable for guys looking to build muscle (or simply change up their routines) without turning to ultra-heavy weights. Because ropes create forces and tension from angles that are harder to achieve with basic weight training, they confuse and surprise your muscles into making new gains.

Most fitness supply stores carry battle ropes now—look for nylon ropes with rubber ends, which make it easier to grip the rope with sweaty hands. But if you’re the old-school type—or just prefer the vintage look in your at-home sweatbox—you can always run down to your nearest hardware store and pick up about 50 feet of nylon or manila rope about 1.5 to 2 inches thick.

Start by integrating a set of rope work to the end of your workout, Hopkins says. She suggests doing a basic alternating wave over 30-second on/off intervals. Start with 3 or 4 intervals and then work up to 6 (or reduce the rest) once you’re comfortable. Once you’ve mastered the alternating waves, work both arms in tandem (the double wave) to ratchet up the intensity.

Do each set of rope exercises in a squat position, Hopkins says. Make sure to stabilize your core and plant your feet shoulder-width apart.

Wave: Probably the most common battle rope swing, the standard wave is a great way to focus on your biceps. Tuck your elbows into your sides and alternate pumping your arms up and down, creating alternate waves in the rope. When you’re ready to step up the difficulty, switch to a double wave, where your arms move in tandem.

Slam: Lift both ends of the rope overhead, and then slam the rope down with full force onto the ground. Make sure to maintain good posture. This move engages your shoulders, arms, back, and core, especially your abs.

Flyes: Squat low and whip each end of the rope in tandem, as if you’re flapping your arms like wings. Keep your elbow bent only slightly. It’s a seriously challenging workout for your whole back.

Grappler Throws: Keeping both your feet grounded, pivot your torso from side to side. During each pivot, flip the ropes over as if you were throwing them to the floor on the side you’re pivoting toward.

As with any new exercise routine or piece of equipment, make sure you’re totally comfortable and have plenty of practice before pushing yourself to the limit. If at any point you feel overworked, or if your form starts to suffer, take a break, recuperate, and only complete your workout if you feel like you can handle it.

Once you’re comfortable using battle ropes and you’re ready to integrate them into a regular workout, Hopkins suggests you try this combo circuit of battle rope swings. Perform each move for 30 seconds with 30 seconds of rest. Once you’ve done all 6, rest for 2 full minutes and repeat.