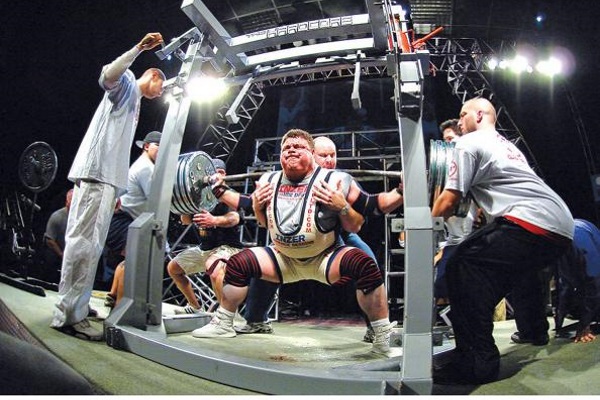 We combed the recorded history of all strength sports to present you with this definitive list.

Throughout history, mankind has been obsessed with physical strength. Since the days when the legends of Hercules first took shape, to the ancient Olympic Games where wrestling matches were used to determine the strongest man alive, we have always wanted to name one man above all others. As the centuries wore on, the methods for determining the strongest man grew more sophisticated, from the advent of Highland games to Olympic weightlifting.

Since 1977 the presumed strongest men in the world have gathered annually to compete in the World’s Strongest Man competition (WSM) to determine who’s No. 1, with similar contests being held by the International Federation of Strength Athletes (IFSA) and at the Arnold Sports Festival.

Still, with all the various ways we’ve devised to determine who is the strongest of the strong, it seems we’ve managed only to create factions, each loyal to the top athletes in their sport or organization of choice.

Powerlifting fans might tell you that Ed Coan is, pound for pound, the strongest man who’s ever lived or that the far larger Andy Bolton is the overall strongest. Fans of the WSM competition might point to three-time winner Bill Kazmaier or five-time winner Mariusz Pudzianowski.

All of the men listed above have a legitimate claim to being history’s strongest man, but really just one can claim ultimate strength, and we’ve decided who that person is. To do so we’ve consulted with a man whose name deserves to be included in every discussion regarding strength. Dr. Terry Todd isn’t merely the United States’ first national powerlifting champion (in 1964 and ’65), he was also the first man to total 1,600, 1,700, 1,800, and 1,900 pounds. Todd is also the creator of the Arnold Strongman Classic, one of the most renowned strength historians in the world, and he and his wife are the directors of the world’s largest collection of physical fitness and strength memorabilia, the Stark Center for Physical Culture and Sports at the University of Texas at Austin. We drew upon Todd’s vast collection and reviewed countless articles detailing the feats performed by men of all eras.

We’d like to make it clear that comparing athletes whose peaks came a century apart makes educated speculation a must. First, there’s the issue of chemical enhancement, something obviously not available to a Louis Uni. Second, Todd points out that during the late 19th and early 20th centuries, strength athletes didn’t so much train as give performances on an irregular basis. The strength they displayed for gawking crowds was raw and untrained—and it was their performances that made them stronger, nothing systematic. In this light, we attempted to recognize not just recorded strength but potential strength as well. Call it a metaphysical leveling of the playing field.

Without further ado, we believe this list to be the most definitive of its kind.

In our opinion, he’s the strongest man of all time. You just can’t argue with these numbers: Savickas has won the Arnold Strongman Classic seven times (2003–08, 2014), which is considered a truer test of pure strength than the better-known WSM competition. In 2005, he broke three world records en route to victory at the IFSA Strongman World Championship. The following year he again took top honors.

Savickas placed second at the WSM competition in 2002, 2003, and 2004, usually dominating the events that involved pure strength while not doing as well in those that required speed and agility. In 2009, he broke the streak by winning the WSM—an accomplishment he’d repeat in 2010, 2012, and 2014. In ’14, Savickas also set a new world record with a 500-pound log lift to complement his other impressive totals: a raw squat of 880 pounds, a 900-pound deadlift, and a 629-pound bench.

Henry holds the unique distinction of being the only man ever to hold both the U.S. weightlifting and powerlifting superheavyweight championship titles at the same time. Despite his incredible feats, Todd believes that Henry has stores of untapped potential that we never got to see as he pursued a career in WWE. So in theory at least, Henry might have been the strongest man in history. However, we think one man has him beat…

“Kaz” is considered by many to be the strongest of the strong, and it’s hard to argue. The winner of the ’80, ’81, and ’82 WSM contests, Kazmaier was barred from competing in 1983 by the event’s organizers because it was assumed that so long as he competed, no one else would ever get the chance to savor victory. Kaz was the first man to lift all five McGlashen stones, which weigh between 90 and 160 kilograms (about 200 and 350 pounds). His 661-pound bench press stood as the world record for years, and if not for a pec tear shortly thereafter he would have surely bested it himself. His 2,425-pound total, set back in 1981, is still the record for raw (no bench shirt, no squat suit) powerlifting today.

Paul Anderson’s name may be the most controversial one on this list. Proclaimed by some to be far and away the strongest man who ever lived, he also has his share of skeptics. Whether he really squatted 1,200 pounds is open to debate, but Dr. Todd personally witnessed him squat 700 for eight reps in an exhibition—at a time when the official world record 1RM for the squat was about 700 pounds. Anderson won an Olympic Gold medal for the U.S. in weightlifting in Melbourne, Australia, in 1956.

Virastyuk is the first person ever to be declared the strongest man alive in both the World’s Strongest Man and IFSA World Championship competitions, winning in 2004 and 2007, respectively. In fact, he edged out the man who tops this list when he achieved victory at the IFSA contest. Additionally, the Ukrainian strongman took second place at the Arnold Strongman Classic on three occasions (2005-07). Now 40, Virastyuk has been retired from competition for some time, but his accomplishments and his legacy live on.

It’s especially difficult to calculate just where Uni, aka Apollon the Mighty, should rank among the all-time greats, as chronicles of his feats are mostly florid, noncritical accounts. But he was known for his great grip strength and large hands, which rendered him capable of lifting bars others couldn’t even fit their hands around. Uni was also quite possibly the world’s first strength athlete, being an extremely fit and agile man who took on all comers in wrestling challenges.

Siders belongs on this impressive list for his overall strength–he excels in all three powerlifts with personal bests of 1,019 pounds in the squat, 799 pounds on the bench, and a deadlift of 865 pounds for a 2,651-pound total. His best raw lifts include 650 pounds on the bench and 840 pounds in the deadlift. Siders takes pride in having achieved the aforementioned feats without the use of performance enhancement, meaning that his strength derives purely from genetic blessings and brutally hard work, much like that of the following man…

Britain’s Andy Bolton is the first man in history to have deadlifted 1,000 pounds. Twice during competition he eclipsed his own accomplishment with pulls of 1,003 pounds and a then-record 1,008 pounds. Bolton holds the fourth highest squat of all time (1213.63 pounds), and his three-lift total of 2,806.34 pounds ranks third highest in history. He once stated his goal was to break the mythical 3,000-pound total, a feat not even dreamed of by most powerlifters of any era.

Taranenko set the world record in weightlifting for the clean and jerk (266 kilograms, or 58.2 pounds) and total (475 kilograms, or 1,045 pounds) way back in 1988—an eon in weightlifting years—and these records still stand today. Due to restructuring by the International Weightlifting Federation of its weight classes, Taranenko’s official records no longer stand, but his lifts have yet to be equaled. You know how hard it is to bench six plates? Imagine lifting it overhead. Now that’s power!

Shaw shares something in common with the legendary Bill Kazmaier—both men have placed top three at the World’s Strongest Man a total of five times. Shaw, a two-time WSM winner (2011, 2013), has posted bests of 972 pounds in the deadlift and 1,122 pounds in the Hummer tire deadlift in competition (with straps). In the gym, he’s credited with squatting 825 pounds, benching 535 pounds, and deadlifting 985 pounds (with straps).