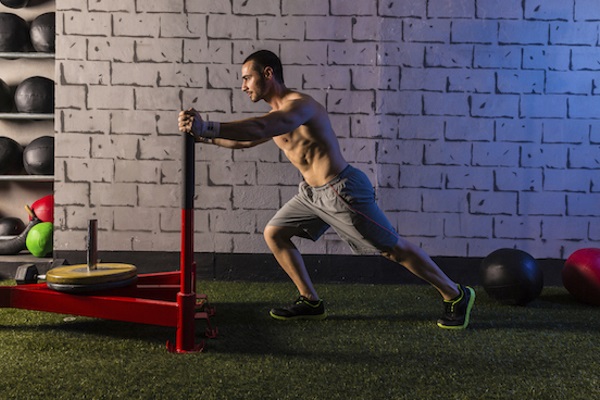 Should athletes use a weighted vest to improve acceleration or maximum velocity during sprinting? A recent study investigated the effects of sprinting with either a 9kg or an 18kg vest vs. sprinting without a vest. This translated to roughly 7 percent and 20 percent of body mass of the subjects in the study. The researchers assessed how much force the subjects where able to put into the ground, velocity and power, which determine how fast you sprint. They also measured how much time your foot spends on the ground, flight time, step frequency and stride length. Sprints were performed on a non-motorized treadmill for six seconds.

Weighted vests allow us to overload the athlete during a sprint, which could positively impact the sprint kinematics listed above. This is due to potentially increasing the athlete’s ability to produce vertical and horizontal forces. The idea is that it will translate into greater force production and better sprint performance when the vest is removed.

There was no significant effect on peak power production, and there were no changes in ground contact time among the conditions. However, flight time was significantly decreased with the 18kg vest.

At max velocity, only the 18kg vest showed moderate increases in force production, meaning heavier loads may be needed to promote greater force production. Force production when accelerating didn’t signficantly increase when wearing a vest compared to not wearing a vest. This could be explained by less rise and fall of the body during the stride, which decreases the amount of force that can be put into the ground. Also, it appears that the subjects had difficulty controlling the extra weight, limiting the amount of force produced to propel them forward.

Based on this paper, a weighted vest offers little to overload horizontal and vertical forces during sprinting. A greater load may be needed to challenge force production during maximum velocity, but greater loads can potentially cause negative changes to sprint technique. A simple substitute would be a sled sprint where the added load would not affect the rise and fall of the center of mass as much. If the sole goal is to increase the athlete’s ability to produce force vertically and horizontally, exercises such as loaded Box Jumps or Loaded Broad Jumps may be better alternatives.