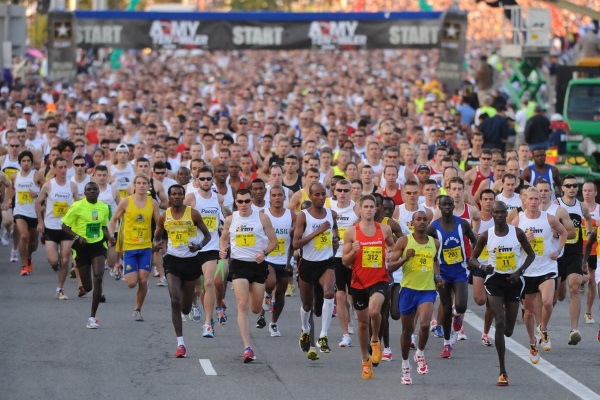 From Ergo Log
Running a marathon is an assault on the body. By the end of a marathon, men’s cortisol levels have doubled and their testosterone levels have just about halved, according to a study done at Universidade Federal de Sao Paulo, and published in 2006 in Arquivos Brasileiros de Endocrinologia e Metabologia.

Study
The researchers monitored twenty health men aged between 25 and 42 for several days before, during and after they ran the 42.2 kilometre race. The researchers measured the levels of hormones and muscle damage-markers in the subjects’ blood.

Results
The figure below shows the subjects’ cortisol and testosterone levels two days before the race [antes], just after the finish [final] and a day later [apos]. All measurements were done at the same time of the day – in the morning.

Immediately after finishing the marathon the subjects’ testosterone level halved, falling from 673 to 303 ng/dl. The cortisol level rose sharply, from 20.3 to 42.5 microg/dl. Although the testosterone level hadn’t completely reached the initial level, in statistical terms there had been a full recovery.

The researchers also regarded it as a complete recovery, but they based their conclusion primarily on the ratio between the catabolic cortisol and the anabolic testosterone. Because, a day after the race, the cortisol level had also not returned completely to the starting level, the ratio of cortisol to testosterone was the same as at the start.

The researchers also measured the concentrations of the enzymes LDH and CK. The higher the levels of these, the greater the amount of muscle damage in a body. Immediately after the race the concentrations had risen considerably, and a day later they were even higher.

Conclusion
“A marathon race may cause a marked physical stress, resulting in a distinct hormonal imbalance and severe cellular damage”, the Brazilians conclude in their study. You can say that again.

Would a cortisol lowering and testosterone raising supplement like phosphatidylserine be of help to marathon runners? And what about strength training? Or a diet containing more healthy fats?