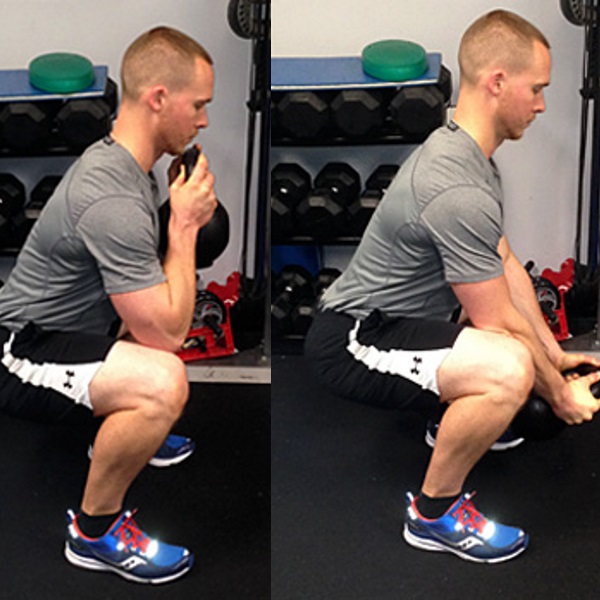 A New Twist on the Kettlebell Goblet Squat

You’re a lifter. So it’s a safe bet that you’d like to have both a monster squat AND impressive biceps, so an exercise that helps accomplish both goals at the same time would probably pique your interest, right? Enter the goblet squat and curl (GSC). Here’s how it works.

How to Do It

How to Use It
The GSC will help you achieve a better squat pattern and train you to be explosive from the bottom position – with a bonus of a little extra bicep work. Because of these benefits, there are two blocks in a program where you can take full advantage of the GSC:

All you have to do is decide which is more important at this time and then incorporate the GSC accordingly.

How It Helps Your Barbell Squat
The goblet squat and curl isn’t meant to boost strength gains by pushing large amounts of resistance. In fact, the resistance used with goblet squat and curl won’t be anywhere near the amount of weight you can front or back squat. But it will help you boost your squat numbers by shoring up common technique issues you might be having with your squat. These issues include an anterior weight shift during the squat, a loss of thoracic position into flexion, and a valgus collapse of the knees (inward buckling).

Since the resistance is more anterior, it allows your center of mass to shift slightly, giving you a more advantageous position to sit deeper and further perfect squat mechanics. The position of the kettlebell also presents a greater challenge to the core.

The position of the kettlebell also challenges and strengthens the thoracic extensors so they maintain a neutral alignment throughout the exercise. Unlike the front squat where the lifter’s elbows remain parallel with the ground, GSC has the elbows pointing towards the floor. This makes it easier for you to focus on the thoracic positioning while gravity is trying to pull the kettlebell and thorax into a more flexed position. You’ll be able to solidify this positioning during the squat.

As you descend into the bottom of the GSC, your elbows will come to the inside of the knees. This position of the elbows forces you to maintain neutral alignment of the knee with regards to the hip and foot and helps to prevent valgus collapse.

Again, the lighter resistance (when compared to the traditional front or back squat) makes it easier to focus on keeping your knees out and “ripping the floor apart” so that the knees aren’t put in a vulnerable position. It also promotes more glute activity and therefore, force.

Wait, What About the Curl?
Not only will you get a bicep pump, but curling at the bottom of the squat forces you to stay in “the hole” a little longer with an isometric hold. This isometric hold will get you more comfortable in that position and decrease the elastic response of the stretch shortening cycle. Without the elastic energy out of the hole, you’re forced to use more explosive starting strength from the bottom position.

The curl will challenge you to keep the thoracic spine from flexing forward as the kettlebell is lowered into the curl, increasing your ability to stay out of thoracic flexion during the squat and allowing you to increase the resistance used during squats without collapsing forward. Give it a shot.