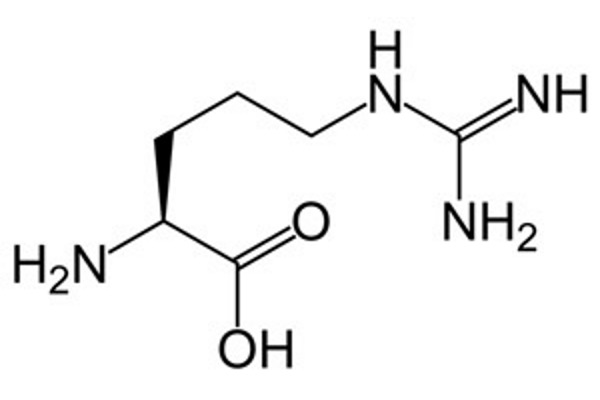 Give rats L-arginine [structural formula shown below] in their food and they become slimmer and more muscular. Even if you feed them more calories they develop less fat layers and get more muscles, write researchers from Texas A&M University in the Journal of Nutrition.

Many studies have been published in recent years on the fat reducing properties of the amino acid L-arginine. Give women who are dieting eight grams of the stuff, and they lose fat only, not muscle. Mix L-arginine with piglets’ feed, and they grow to be lean and muscled.

There are several theories in circulation about how the figure-changing mechanism of L-arginine works. One is that the amino acid makes the androgen receptor function more effectively. Another is that arginine increases muscle growth via NO, the ‘good radical’. Or maybe L-arginine increases the activity of cyclic guanosine monophosphate [cGMP] in the muscles, so that they burn more fats and sugars and less protein.

The researchers at Texas A&M recently discovered yet another mechanism. They found that “dietary supplementation with L-arginine selectively reduced white fat mass while increasing expression of the genes for AMP-activated protein kinase and PPAR-gamma coactivator-1alpha (master regulators of mitochondrial oxidation).”

Well, well. Researchers can explain this kind of thing much more clearly than journalists like us.

In their new publication, the researchers describe experiments they did with four groups of rats. One group were given a low-fat diet. [LF] This kept rats thin. The other group were given a diet containing forty percent fat. [HF] That’s a diet that will give you fat rats.

When the rats reached nineteen weeks, half of the LF and half of the HF rats had 1.5 percent L-arginine added to their feed. Converting that into human terms – someone who eats 2500 kilocalories a day would get 9.4 g of L-arginine a day. The other rats got L-alanine, an amino acid that has no effect on fat.

The L-arginine had virtually no effect on bodyweight. But it did affect body composition.

The table above shows the effects on the HF rats. They developed more muscle, less white fat and more brown fat. Brown fat is the active fatty tissue that burns fat.

The L-arginine supplement had a similar effect on the mice that had been given low-fat feed and had not put on weight.

L-arginine improved the action of insulin, the researchers discovered. The muscles of the rats on the L-arginine supplement absorbed more sugars. When the researchers analyzed the blood of the arginine-rats, they found lower levels of the amino acids that the body uses to build up muscle. This points to anabolic processes being at work, the researchers suggest. Maybe L-arginine reinforces the anabolic stimulus on muscle growth.

Even though there’s still no conclusive evidence of the role of L-arginine in altering body composition, supplements manufacturers continue to put L-arginine in supplements that are supposed to have a slimming effect and in protein/creatine mixtures.

If only people were like rats. Then you could buy everything you need to win that coveted championship at the supplements shop.