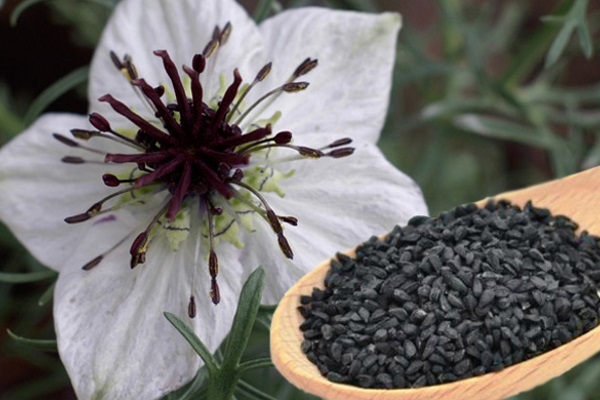 A daily dose of 2 g ground Nigella sativa seeds can raise men’s testosterone levels by thirty percent. Researchers at the University of Tikrit in Iraq discovered this when they gave men 2 g Nigella sativa every day for three months.

Study
In countries like Iraq many people don’t have enough money for medicines such as clomiphene, HMG or testosterone, so scientists are looking seriously at the effect of local herbs and extracts on hormone disturbances. The Iraqi study, which was published in 2013 in the Tikrit Journal of Pharmaceutical Sciences, is one of these studies.

The researchers did an experiment with 40 married men aged 18-40 who were unable to have children, and whose sperm quantity and quality doctors had already declared suboptimal. Half of the men were given a placebo for three months; the other half was given 2 capsules twice a day, each of which contained 500 mg Nigella sativa.

The concentration of the hormone FSH rose by 47 percent and that of LH by 33 percent in the blood of the men in the Nigella sativa group. These hormones stimulate the production of sperm and testosterone in the testes. The Nigella sativa supplementation raised the men’s testosterone level by 29 percent.

Conclusion
“From the present study, we conclude that there is a significant increase in testosterone level after treatment with Nigella sativa, which may be attributed to somehow enhancing FSH and LH release, which leads to improvement in all semen parameters”, the Iraqi researchers wrote. “The present study recommends the use of Nigella sativa as a single treatment for male infertility or complementary with another fertility therapy.”