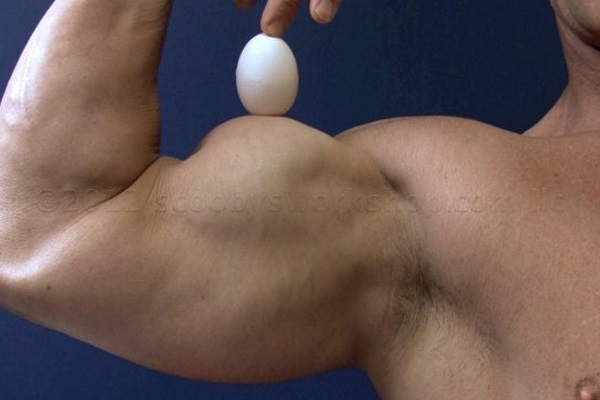 Eggs dangerous?
Big epidemiological studies have concluded that one egg a day is not harmful, but eating more increases the risk of cardiovascular disease. [JAMA. 1999 Apr 21;281(15):1387-94.]

The classical interpretation of these studies is that the 180 mg cholesterol [structural formula shown above] that you consume with each egg yolk has a negative effect on your cholesterol level. Some nutritionists have a different explanation though: people who eat lots of eggs often have a more unhealthy lifestyle and this is what increases their risk of cardiovascular disease.

But not all heavy egg users have a bad diet. Strength athletes generally watch their calorie intake, make sure they get all the minerals and vitamins they need and avoid junk food as much as possible. So can these strength athletes afford to eat more than one egg a day? Or will this habit lead to a heart attack or stroke in the long term?

Study
The researchers tried to answer this question by doing an experiment on 25 healthy men and women aged between 18 and 35. All subjects trained at least three times a week with weights.

The researchers got some of the subjects to eat 2 eggs for breakfast every day for 12 weeks [EBB]. Their diet consisted of 43 percent energy derived from carbohydrates, 25 percent from protein and 32 percent from fat.

Other subjects ate bagels [white bread rolls] for breakfast [BBB]. Their diet consisted of 68 percent energy derived from carbohydrates, 17 percent from protein and 15 percent from fat. Both breakfasts provided the same amount of kilocalories.

Results
Despite the higher cholesterol intake of the subjects who had the ‘egg breakfast’, there was little change in the amount of ‘good cholesterol’ HDL and ‘bad cholesterol’ LDL in their blood.

The effects shown above [LDL and HDL] were not statistically significant, but the effect shown below [of triglycerides] was. The concentration of triglycerides in the blood decreased in the strength athletes that had eaten eggs for breakfast.

Conclusion
After reading this study you may be wondering exactly what the researchers actually discovered. Did they discover that eggs are not a danger to the cardiovascular system? Or that bagels are a danger?

The study was financed by the Egg Nutrition Council.