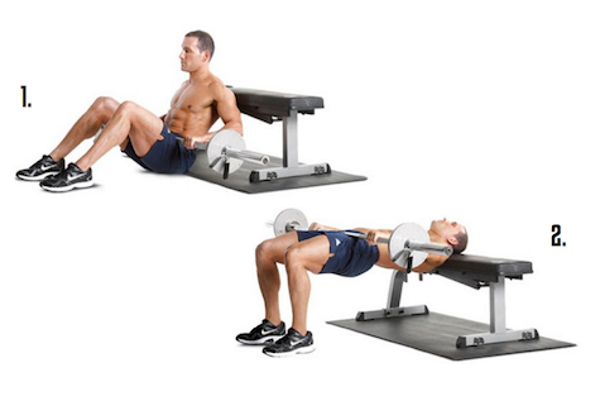 Hip thrusts stimulate the buttock muscles more than squats do. Trainer Bret Contreras draws this conclusion in a study that will soon be published in the Journal of Applied Biomechanics.

Hip thrust
The photo below shows how the hip thrust is done. It’s an exercise that’s fast becoming popular in gyms. One of the main reasons for this is the rise in popularity of Bret Contreras himself [bretcontreras.com] whose blog, videos [YouTube.com] and newsletter are attracting a growing number of fans.

Contreras has always been in favour of hip thrusts as a good exercise for the gluts. They feature prominently in Contreras’ training programmes – and many trainers have followed his example.

Other opinion
Not that all trainers agree with this approach, however. One who doesn’t is power lifter and trainer Chris Duffin. In the clip below Duffin explains why he thinks the hip thrust is great exercise, but not suitable to be used for training the gluts with heavy weights.

Study
Contreras did a study in his own research centre, using EMG to measure how hard the gluteus maximus, the biceps femoris and the vastus lateralis had to work when doing regular squats and hip thrusts. He used trained women as his subjects and got them to do the exercises with weights for which they could just manage 10 reps.

Results
The figures below show that hip thrusts stimulate the gluteus maximus and the biceps femoris better than squats do.

Conclusion
“The back squat has long been a staple in strength training programs and is one of the most well researched exercises in the literature”, Contreras wrote in the concluding paragraphs of his publication. “The barbell hip thrust is a newer exercise that lacks longitudinal research.”

“Fitness professionals can confidently incorporate back squats into their programs with the knowledge that they will lead to hypertrophy and performance improvements. The findings of this study indicate that fitness professionals can also justify the inclusion of barbell hip thrusts into their programming for developing the hip extensor musculature due to the superior mean and peak gluteus maximus and biceps femoris activity compared to the back squat.”

“In cases where back squats cannot safely be performed, perhaps due to injury, pain, mobility deficits, or hip dysfunction, the greater stability of the barbell hip thrust would seem to make it an excellent alternative for developing the lower body musculature. Additionally, evidence suggests that individuals seeking to maximize their gluteus maximus development should incorporate barbell hip thrusts into their regimen.”