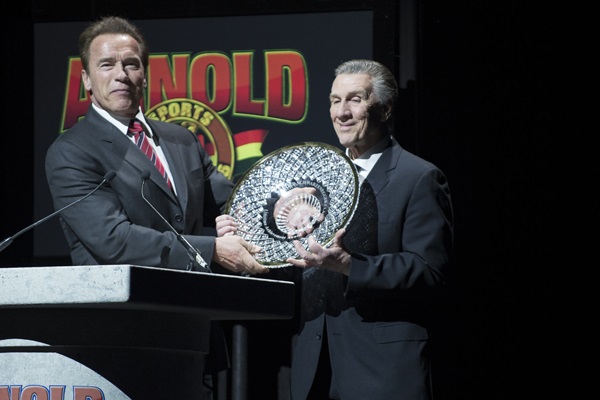 One would think that the mere thought of this would be preposterous, but it has become blatantly apparent that a good portion of the bodybuilding industry has abandoned Arnold Schwarzenegger ever since he called out the judges and mainly IFBB president Jim Manion regarding the number of competitors who possess big guts placing highger than the ones with the more aesthetic physiques.

Schwarzenegger, 67, put bodybuilding on the map by becoming the sport’s first mainstream figure. The seven-time Mr. Olympia went on to become a movie star and governor of California, but always remembered his roots and has remained an integral part of the bodybuilding industry.

The annual Arnold Classic that began in 1989 (promoted by Schwarzenegger and Jim Manion) has grown into the largest sports festival on the globe and pundits of the iron game flock to Columbus, Ohio every March. That has grown into a number of spinoff weekends all around the globe that carry the Arnold Classic moniker. So it would seem that The Austrian Oak has made himself as involved now as when he donned the posing trunks and his opinion should carry perhaps even more weight than ever before.

But that’s not the case anymore.

WHY THIS TIME WAS DIFFERENT

When Schwarzenegger made the comments heard round the world at his seminar the morning after the Arnold Classic in March, most of them were not anything that hasn’t been said before – even by him. The competitors today hit the stage with wide waistlines and cannot hold their stomachs in and this is a far cry from the days of the vacuum pose.

But Schwarzenegger took it a step further when he said, “We gave the Lifetime Achievement Award to Mr. Jim Manion, but that does not mean that we can not disagree with him because he’s in charge of the judging. He’s in charge of picking the judges. And you have to talk to him…and you magazines and all of the Internet and the others means (that) there is. Call out on him and call out on those judges. Because that’s how you create change, by calling out and saying that this is unacceptable the way bodybuilding is going.”

Emcee Bob Cicherillo was seated right next to Schwarzenegger and replied, “Well said,” giving the appearance that he was in agreement. But that was certainly not the case a few weeks later.

THE INDUSTRY BANDS TOGETHER – AGAINST ARNOLD

The various bodybuilding forums and social media pages were aplomb with many fans applauding Schwarzenegger for being their spokesman, as the ‘big gut’ debate has been in the headlines for years. But this time it seemed different and it was the pointing out of the judges and Manion that was the wild card.

The situation came up on the March 23, 2015 episode of Pro Bodybuilding Worldwide and Cicherillo added, “This was completely unsolicited and Arnold went into his diatribe about the bellies and he wants a return to the 1974 physiques. That’s nice and all and the message we all agree with. What I didn’t like was the delivery and what caught people the wrong way was the way he mentioned Jim in that…as if this is a problem and he’s not doing anything about it. And that’s simply not true.

“But this isn’t 1974 anymore and the physiques have changes,” he continued. “The conditioning has changed. Guys today are exhibiting conditioning that they only could have only dreamed about back in the 70s or even the 80s. The guys are a lot bigger than they were. Can they be smaller in the midsection? Sure, some of them can. But some of the words that come down, you would think there’s 10 guys standing up there with beer bellies hanging out.”

Cicherillo also spoke about the fact that the Arnold Classic is an invitational show and the promoters can invite the bodybuilders that they want who do not possess a wide-looking physique. But perhaps in a moment of accidental clarity, he added, “But obviously that may not include the best bodybuilders in the world and that would effect the show and its tickets sales.”

At the FIBO Expo in Germany in April, four-time Mr. Olympia Jay Cutler was a little more direct in his criticism of Schwarzenegger’s stand. “I don’t know where Arnold comes up with that whole thing,” he said in a video posted by RX Muscle. “We’ve been through different sizes of (bodybuilders). They have been bigger before and now we get a couple of guys that were a little loose with their stomachs and all of a sudden it’s a big deal. I think that he’s beating a dead horse; we went through this years ago.”

But Cutler’s next comment goes in line with the crux of the entire debate when the subject of Dorian Yates was brought up, who was the first mass monster to win the Sandow and set the new standard in 1992. “That’s where it all started,” added Cutler, whose physique is one of those that fits the wide description. “Once you push these guys to be bigger, guys are going to come in on or off. They’re going to have stomach issue and it’s a carbing up process a lot of the times.”

Things began to border on the bizarre when Muscular Development magazine took toeing the company line to another level. They ran a feature in their July 2015 issue entitled “His Gut Feeling: Arnold Lashes Out at Judging,” in which they had a roundtable discussion about the controversial topic.

Senior writer Ron Harris pointed the finger not towards the competitors or judges, but rather at the fans for the lack of V-tapers in the sport. “Some of the blame has to also go to the fans,” he said. “The fans were really the force that fueled the trend towards the mass monsters, as they clamored for bigger, heavier, freakier physiques.” Using that mentality, Major League Baseball could have said it was the fans’ fault that players began using performance-enhancing drugs so that they can hit more home runs and make the games more exciting. (Remember the saying, ‘chicks love the long ball?’)

Phil Heath has won the last four Mr. Olympia contests and not only had something to say about Schwarzenegger and his remarks, but took a cheap shot at him, as well. While being interviewed on video by NPC News Online, Heath did his best to dismiss all of this talk.

“I think that all of the judges got it right at the Arnold,” he said, “and they get it right at the Olympia. The guys with the distention didn’t place well so you guys (sic) gotta stop with this whole ‘who’s aesthetic and who’s not’ because the guys’s who are winning already have it.”Arnold2013bellies

[EDITOR’S NOTE: This would seem to go against what Cicherillo had stated about the top bodybuilders being left off an invitational list for the Arnold Classic if the promoters only wanted to bring in competitors with small waists.]

Dexter Jackson was the winner of the 2015 Arnold and is viewed as one of the more aesthetic-looking bodybuilders on the circuit. But he, too, has dealt with being called out by Schwarzenegger for having a distended gut, which he blatantly possessed in Ohio two years prior. Jackson was the winner that night, too, but the entire top-five were all in similar condition, or lack thereof.

Heath left little doubt as to his true feelings in a Facebook post on his verified account. He answered a fan who asked about The Gift being in a position to do something about this issue and that bodybuilding needs to change.

“I believe you’re wrong, as our sport generates more fans daily than ever before with more pro shows all over the world. More fitness businesses than ever and companies due to the heavy influence of bodybuilding. I, for one, have benefitted by even being accepted on Bloomberg TV doing a segment on “Street Smarts,” so (sic) not so sure if your post is valid enough to refute my reality. I also think that it’s at times the athletes’ inability to train our breathing more than you think, as we are all much larger than our predecessors ever were. Oh, and Arnold, as we know, had no legs. So let’s remind ourselves that.”
heath7

Viewed as a cocky individual before this, Heath did not endear himself with the fans, who have pointed out on the various bodybuilding websites that he is not totally exempt from the distended stomach knock, either. On the Muscular Development forum, a post was about the hypothetical situation of Schwarzenegger having larger legs if he were competing today and using a modern day steroid regimen, to which Cicherillo replied:

“Allright Counselor…I’ll retort. Arnold might have (sic) substancially bigger legs with todays supps…but would his waist be larger as a result…?”

And when another post spoke about Schwarzenegger having a tiny waist, Cicherillo had this to say – “Dont know about “tiny”…small for HIM perhaps.”

All of this talk is making it blatantly obvious that more people in the industry and connected to the media have chosen to turn their collective backs on Schwarzenegger. This is akin to baseball doing the same to Babe Ruth, something that will never happen. But bodybuilding is not baseball and never will be.

Its only connection to the mainstream world is Schwarzenegger and this backstabbing-type strategy is puzzling, to say the least. To disagree with his comments is one thing, but to try and demean his accomplishments (in this case, his award-winning physique as a competitor) is totally uncalled for.