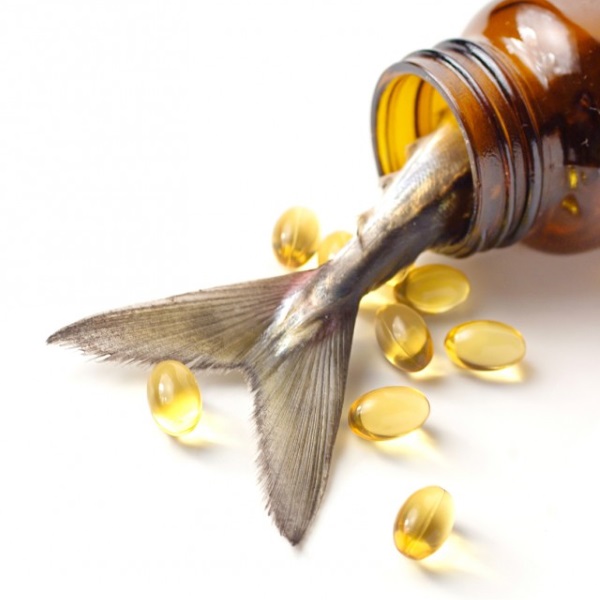 Here I will present the results of a more recent study that investigated the effects of fish oil supplementation on body composition and metabolic outcomes.[1]

The results demonstrated that fish oil supplementation significantly increased resting metabolic rate by 14%, energy expenditure during exercise by 10%, and fat oxidation – i.e. “fat burning” – during rest by 19% and during exercise by 27%.

The 14% increase in resting metabolic rate translated into an increased energy expenditure of 187 calories per day.

In addition, fish oil supplementation reduced triglyceride levels (i.e. blood fats) by 29% and increased lean mass by 4% (3.53 lb or 1.6 kg) and functional capacity by 7% (measured by the “Timed Get Up and Go” [TUG] test). No changes occurred in the placebo group. There was also a small reduction in the inflammatory marker CPR (C-Reactive Protein) when compared to the placebo group.

It was concluded that fish oil supplementation may be a strategy to improve age-related physical and metabolic changes in healthy older females.

This study confirms findings from some earlier studies that I cited in my previous article “Fish Oil for Muscle Growth and Prevention of Muscle Loss with Aging”, which found increases in lean body mass (muscle mass), energy expenditure and fat burning.

Despite the elevation in energy expenditure and fat burning, in this study there was no reduction on body fat.[1] This may be because of the short duration of 12 weeks (3 months) and/or because the subjects consumed a high-carb diet (50% carbs, 20% protein, 30% fat). Previous studies show that high-carb intakes [9, 10], as well as high intakes of omega-6 fats [11], may abrogate the fat loss effect of fish oil.

The 4% (3.53 lb or 1.6 kg) increase in lean mass in just 3 months is impressive. It should be noted that this study used BIA (bioelectrical impedance) to analyze body composition. Ideally, a more precise measurement of body composition using DEXA (dual x-ray absorptiometry) or MRI (magnetic resonance imaging) should be used in studies investigating effects on interventions on body composition. DEXA and MRI can also show where on the body lean (muscle) is being gained. Nevertheless, a previous study reported a similar increase (3.5%) in thigh muscle lean mass using DEXA [12], indicating that this amount of gain in lean mass may be realistic, at least in this population.

Although this study did not find any significant increase in grip strength, a significant 7% increase in physical function, as determined by TUG speed, was demonstrated. It is notable that this was found without any exercise program.[1]

A previous study reported an increase in physical performance, as measured by walking speed, in response to supplementation with 1.2 g/d of EPA + DHA for 6 months in 126 frail older women aged 75 years.[13] In another study in 45 older women aged 64 years, fish oil supplementation (2 g/d) combined with a 90 d strength training protocol resulted in significant increases in functional capacity (sit to stand test), muscular strength, and neural activation (as measured by electromyography), which were greater than values achieved by strength training alone.[14]

A more recent study in 60 healthy 60-85 year old men and women reported an increase in handgrip strength by 2.3 kg, and an increase in 1-repetition maximum strength by 4% in response to fish oil supplementation (EPA: 1.86 g; DHA: 1.5 g) for 24 weeks.[15] It may be that the 12 week supplementation period in the study reported here was not long enough to evoke increases in strength.

One mechanisms by which fish oil improves physical and muscle function is by increasing the fluidity of the muscle membranes, as well as the sensitivity to acetylcholine [16], which is a neurotransmitter that evokes muscle contractions.

The reduction in triglycerides and CRP seen in this study are not surprising.[1] Fish oil is an effective “drug” for lowering triglycerides (it does so even better than the widely prescribed statin medications) [17, 18], and is well known for its anti-inflammatory effects.[19-22] However, to reduce CRP levels in apparently healthy people a higher dose (at least 3 g EPA + DHA) [1, 23] taken for a longer duration seems to be required, as previous studies providing a low dose fish oil (1.5 to 1.8 g EPA+DHA) [24-26] or being of short duration (less than 8 weeks) [27] did not show any reductions in CRP levels. Also, no reductions in CRP are seen in people with low baseline CRP levels, even at higher doses.[28]

There are currently no studies that have directly compared fish oil effects on body composition parameters in different age groups in the same study under the same conditions (dose, EPA:DHA ratio, duration etc). However, as I outlined in my previous articles, several studies have demonstrated that fish oil supplementation confers benefits for younger adults also in terms of fat loss and anabolic response of muscle protein synthesis to amino acids and insulin. Whether the latter translates into greater muscle mass and strength gains in young folks has not yet been investigated in any study. But considering that the acute response of net muscle protein balance reflects 24-hour balance after exercise and amino acid ingestion [34], and that the enhanced amino acid sensitivity of protein synthesis probably persists for just as long [35], the outlook for fish oil as a muscle anabolic enhancer for any gym rat – regardless of age – is promising.