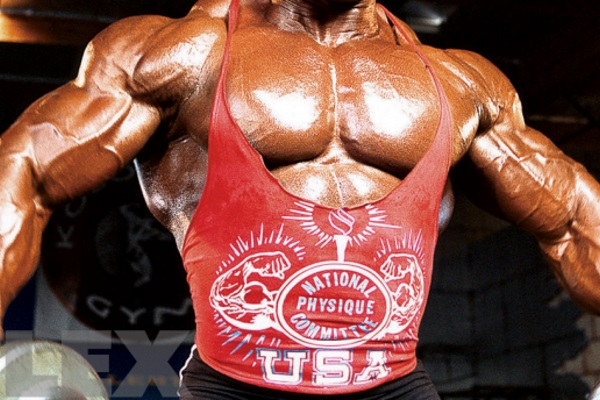 Can routines made up entirely of giant sets lead to giant gains?

So you’ve got dough, tomato sauce, mozzarella cheese, and turkey pepperoni. The prospect of eating each individually, cold and uncooked, is not very appetizing. But stack them together and apply heat and you can bake the perfect cheat meal—pizza. This is the logic of giant sets, which combine four or more exercises into what is, in effect, one extended set. The sum is greater than the parts. “Going giant” has long been a way of upping workout intensity, but for some bodybuilders it’s more. It’s a training philosophy. For extended periods, you can cook up consistent gains by making giant sets the main dish of your routines.

First, let’s define some terms. A superset consists of a set of two exercises paired together, performed without rest. A triset is the same thing but with three exercises, while a giant set consists of four or more exercises. Those lifts can be for the same body part (such as quadriceps) or neighboring body parts (quads, hams, glutes). Generally speaking, the more exercises you do, the more diverse they should be. A lower body giant set might consist of leg extensions, front squats, leg presses, leg curls, and lunges, thus combining isolation exercises (leg extensions, leg curls) with compound exercises (front squats, leg presses, lunges), all while hitting quads, hams, and glutes in the same sequence.

Done correctly with no pause between subsets, this is exhausting. It’s difficult to keep your intensity up throughout an array of disparate lifts. What’s more, it can be a logistical challenge to jump from station to station without rest in a crowded gym. While you’re doing leg extensions or squats, someone might jump on the leg press, and someone else might hog the only leg curl machine. These are the key reasons why giant sets are rarely performed for anything but abs. If done at all, most trainers use them as an occasional means of turning up the heat.

They don’t have to be side dishes. They can be the main course—or the only course. Some bodybuilders, most notably Milos Sarcev, have constructed routines made up only of giant sets. Sarcev postulated that such exercise medleys were the most effective vehicles to drive glycogen and protein to muscles. FLEX followed three Sarcev pro protégés in 2007, including Hidetada Yamagishi, as they plowed through a precontest barrage consisting of a six-exercise chest giant set (three times), a seven-exercise back giant set (three times), and an eight-exercise shoulder giant set (twice). Number of dashes to the locker room to puke: two.

Giant sets are similar to circuit training. (The difference is that circuits work the entire body.) As with circuit training, we don’t recommend going giant as a year-long strategy. But for extended periods of six to eight weeks, it can shock you into greater gains and provide the sort of minimum-rest workouts that subtract body fat while adding muscle.

Find the right supplements for your diet and fitness goals at GNC Live Well.