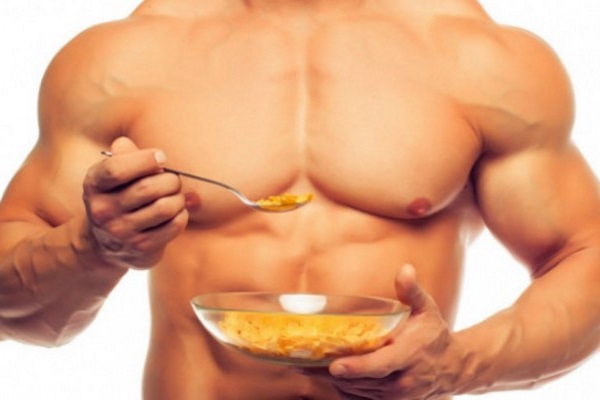 “Are they one in the same?” Back in the 80’s, when the term “clean eating” became part of the bodybuilding vernacular, it was primarily used to describe a diet which was low in fat. Most bodybuilders of that era, and even into the 90’s, viewed fat, particularly saturated fat, as both unhealthy and counterproductive to their physique goals. Therefore, they were largely absent from the diets of most bodybuilders, with even naturally occurring sources being removed when possible. Eggs were de-yoked, dairy products were always low or non-fat, any meat within the diet came from the leanest cuts available, and animal-based fats such as butter were shunned completely.

But this wasn’t the only nutritional blunder which undermined the efforts of the bodybuilding elite. As animal proteins and grain-based carbs became synonymous with recovery and growth, their consumption was considered paramount, frequently to the exclusion of fruits and vegetables. Other factors, such as the degree of processing, and the lifestyle and diet of the animals from which these foods were derived, were rarely regarded as important, let alone prioritized.

The situation continued to worsen as we entered the 90’s. With the size game in full swing, consuming enough calories to support one’s musculature became a real chore. In many cases, it was not uncommon to see diets containing 5,000, or even more calories per day. As bodybuilders grew to freakish proportions and calorie requirements continued to increase, we began to see processed, fiber-less carbs (grains stripped of the bran & germ) make up an ever-growing percentage of the diet.

This transition was understandable, as the majority of processed carbs are more easily digested, take up less room in the stomach, and result in a shorter period of satiation, thereby enabling the individual to consume larger quantities of food throughout the day. While this may have made things easier, it did not make things better. In addition to the health risks associated with the chronic consumption of these carb sources, micro-nutrient intake was drastically reduced.

When looking back, it is easy to see why bodybuilders made these decisions. In one sense they were focused on the right things, such as driving protein synthesis and maximizing muscle volumization, but they failed to see the bigger picture. More specifically, they did not realize the consequences of these dietary manipulations, nor were they aware of the benefits they were missing out on, but today’s bodybuilders have no excuse for continuing to adhere to these flawed, out-dated practices.

Over the last 20 years, our knowledge of nutrition and its effects on the human body has increased dramatically, providing us with everything we need to design effective, nutritionally sound diet plans. Yet, ignorance continues to run rampant, with many bodybuilders and even some coaches employing/recommending nutrition programs which are far from ideal, as well as potentially injurious to one’s health. The bodybuilder may still grow with these programs, even quite well in many instances, but when evaluated in their entirety, they fall short, especially in the long-run.

Maximizing progress over the long-haul requires more than just supplying the body with the basic components necessary for recovery and growth (i.e. amino acids and glucose). The processes that directly regulate muscle hypertrophy are not an island unto themselves, as their ability to produce the desired result (growth) are dependent on the functioning of multiple bodily systems, each of which are dependent on other systems, and on down the line it goes. The body works as a cohesive unit, with each aspect of our physiology interconnected and reliant on the next for proper functioning. If one thing suffers, other things suffer with it, initiating a domino-like effect throughout the body.

One thing all of our bodily systems have in common is that they require sufficient nutrition in order to function to their fullest capacity. The greater the nutritional deficit present, the more adversely they are affected. Only when the body is firing on all cylinders—when it is healthy as a whole—can we expect to recovery and grow to our maximum potential. To this end, diet is critical.

Here is a word for word example of an off-season diet, which was provided to a client of mine when working with his former, well known coach. He was told to follow this diet day in and day out, with the quantities of food gradually increasing as he got bigger. 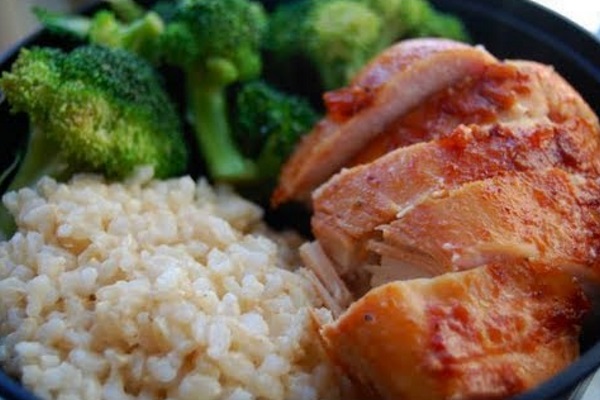 Sadly, diets such as this have become all too common, but what I find even more troubling is the number of bodybuilders who actually believe this way of eating is “healthy”, let alone optimal. It is easy to see the thought process behind this diet, the goal of which is to maximize protein and glycogen synthesis via the repeated consumption of animal proteins and complex carbs.

Without a doubt, these two factors form the foundation of a successful bodybuilding diet, as both proteins and carbs are essential for promoting recovery, growth, and performance. Similarly, intra-workout nutrition has been proven to further stimulate muscle growth by taking advantage of the up-regulation (the processes involved in nutrient transport and protein synthesis) that that occurs during the training window. However, the person who designed this diet also neglected to address about a dozen other factors, each of which can impact one’s physique and health to varying degrees.

There are at least 6 major problems with the diet above, they include:
• Insufficient dietary fiber (both soluble and insoluble)
• The near complete absence of vegetables
• Inadequate fruit intake
• A lack of whole-grains/ too many processed carbs
• Imbalanced fatty acid intake
• Failure to recommend consuming proteins from animals which have been fed a natural diet (ex. grass-fed vs. corn-fed beef, free-range vs. non-free range eggs, wild-caught vs. farm-raised salmon, etc)

It’s easy to sit here and tell you that today’s bodybuilders have lost their way, that the kind of diet listed above will inevitably result in sub-optimal health, impaired overall systemic functioning, and in turn, the inability to make the most of one’s genetic potential. But without any explanation as to why, such a proclamation carries little weight. Although volumes of text would be necessary in order to fully elucidate the negative impact of these dietary deficiencies in their totality, we can gain a basic understanding with nothing more than a short article.

Dietary fiber, a type of indigestible carbohydrate, is comprised of both soluble and in soluble fiber. Insoluble fiber, which includes cellulose, lignins, and certain forms of hemicellulose, plays a critical role in the digestion and elimination of the food we eat. Acting as a sort of cleaning agent, it moves through the digestive system intact, scraping alongside the walls of intestines and colon, thereby keeping it clean and free of debris. Without adequate insoluble fiber, digestive waste sticks to the walls of the digestive tract, impairing both the absorption of nutrients and leading to eventual auto-toxicity. Autotoxicity occurs when uneliminated digestive matter begins to putrefy within the body, resulting in toxin build-up. These toxins are then absorbed into the bloodstream, poisoning the body.

Over time, as layers of waste continue to accumulate, it begins to harden along the walls of the digestive tract and can remain in the body for years, wreaking havoc on our health. This continuous self-poisoning is referred to as autotoxicity and is to blame for many of the diseases and ailments experienced by modernized countries today. In some cases this waste build-up can be extreme, as revealed by autopsies in which up to 50 lbs of rotting fecal matter was shown to be trapped within the colon alone. Obviously, this will also result in stomach distension; something most bodybuilders would rather avoid. Insoluble fiber also helps prevent constipation, and assists in the digestion process by playing a role in the breakdown of animal proteins and other foods within the diet.

Soluble fiber, which consists of pectins, gums, mucilages, and some hemicelluloses, differs from the insoluble type in that it absorbs water while in the digestive tract, forming a gel-like substance that expands in size. This adds bulk to and softens the stool, aiding in the elimination of waste and helping to prevent constipation. Metabolic health is positively impacted, as soluble fiber slows the release of food from the stomach, helping to regulate blood sugar levels and improve insulin sensitivity. It also has a favorable effect on LDL levels by inhibiting cholesterol absorption with the intestines.

Simply put, dietary fiber is not only absolutely essential to the proper digestion, assimilation, and elimination of the food we eat, but is necessary to maintain proper digestive and even whole-body health. In fact, literally 100’s of potential health problems are linked to poor health originating in the digestive tract. So, do yourself a favor and begin including adequate dietary fiber in your meal plan. Fortunately, this will occur naturally when one’s diet is composed of the right food sources, which we are going to address now.

One of the biggest problems within the typical bodybuilding diet is the lack of whole-grains. While carb sources such as white rice have their place, they should be used sparingly and for specific purposes, as the lack of fiber and poor nutrient profile in comparison to their whole-grain counterparts, make them inferior under almost all circumstances. With white rice being one of the most common complex carb sources in the bodybuilding diet, I will use it as an example to illustrate the difference between whole and refined grains.

Like most other grains, rice is comprised up of three parts, or layers. These are the germ, endosperm, and bran. The germ is the embryo, or reproductive part of the seed, from which the new plant sprouts (germinates) and which contains most of the vitamins, minerals, fats, and phytonutrients. These micronutrients help orchestrate a range of physiological functions within the body, while also helping in the prevention of disease. Although making up only 10% of the rice kernel by weight, it is extremely nutrient dense and can be considered the powerhouse of the three layers.

The bran is the outer, protective shell. It makes up roughly 20% of the rice kernel by weight and contains most of the fiber, but little else. The last layer is the endosperm. High in calories and making up the bulk of the grain, it is the energy component, or the “white” part of the rice. It is responsible for providing most of the glucose used for muscular contraction, brain function, and is stored as glycogen within muscle tissue, but is relatively sparse in micronutrients.

When left in its unmolested, whole-grain state, the rice kernel contains all three of these layers in their entirety, supplying the body with the full spectrum of benefits. This is lost during the milling process, when the germ and bran are removed and discarded, leaving us with only the endosperm. At this point we have the finished product—white rice. Unlike the whole-grain version of this carb source, white rice is stripped of its vitality, leaving it with a mere fraction of the micronutrients and fiber it originally had.

Regardless of whether we are talking about rice, pasta, or pancakes, the majority of grain-based carb sources consumed by today’s bodybuilders are refined, providing plenty of calories, but not much else. Why? There are two reasons for this—taste and shelf-life. Because the germ contains fat, whole-grains can go rancid, shortening their shelf-life. Many people also prefer the taste and texture of refined grains; a learned trait due to their introduction into the diet during childhood.

In the second part of this article, we will explore the final four problems that are plaguing the bodybuilding diet and the simple steps one can take to overcome them.