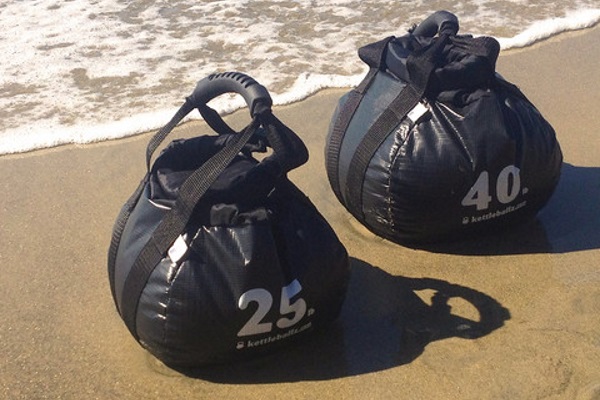 If used properly, kettlebells can give you quite a workout. Participants in a recent American Council on Exercise study on average burned 20 calories per minute during a Kettlebell Snatch workout—or 400 calories during a 20-minute workout. That’s the equivalent of running a six-minute mile.

So why aren’t kettlebells more widely used? Many health clubs and training centers tend to shy away from group kettlebell classes due to property and safety issues. If dropped, those iron orbs can destroy a wooden floor. If dropped during a swing, not only is the floor at risk, but so are nearby athletes.

The Snatch movement, in which the kettlebell flips over the wrist and is caught by the lower arm, can be especially daunting. It can require several training sessions to develop the skill to execute it properly, without bruising or injuring the forearm.

If you’re a beginner, a portable kettlebell (PKB) sandbag might be a safer alternative. Kettlebell sandbags are used to teach the mechanics and timing of various kettlebell movements to kids and adults. A flexible handle helps teach the hip drive behind the Kettlebell Swing, and the soft body of the sandbag is kinder to the forearms when you practice the Clean and Snatch.

Full-Body Kettlebell Sandbag Workout
Warm-up for 3-5 minutes: Around the World to Over the Head Presses using a 30-pound kettlebell sandbag.