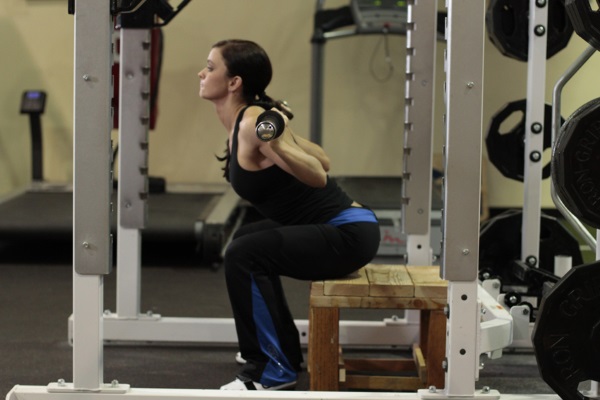 An ordinary squat stimulates your leg muscles slightly better than a box squat – the version where you sit for a second on a box at the lowest point of the movement. But the difference between the two variations is small, say sports scientists at Appalachian State University.

In the box squat you take the effect of the return movement away almost completely. The researchers wondered whether that makes a difference to the stimulus for the muscles, so they did an experiment with eight well-trained strength athletes. The average maximal weight at which the athletes could manage 1 rep [their 1RM] was 200 kg.

The researchers got their subjects to do 1 rep each of ordinary squats [S] and box squats [BS] with 60, 70 and 80 percent of their 1RM. Electrodes attached to the subjects’ leg muscles showed how hard those muscles were working. The researchers only looked at the concentric movement – as the athletes rose up from their squatting position.

VL = vastus lateralis, VM = vastus medialis, BF = biceps femoris, L1 = longissimus. The L1 runs from top to bottom along your spine. You use it to stabilise your vertebrae. VM and VL are the quadriceps muscles, and the BF is one of your hamstrings.

At 70 and 80 percent of the 1RM there is no statistically significant difference between the two versions of the squat.

“The squat or box squat would most likely result in a similar amount of strength gain with training”, the researchers conclude. “The removal of the stretch-shortening cycle by using the box squat may be beneficial as a training tool for those athletes performing concentric-only actions in their sport. For most sport applications, a squat including a stretch-shortening cycle may be of greater benefit.”

The researchers say nothing about what the box squat means for your lower spine. There are lots of stories doing the rounds of power athletes who have developed lower back problems from doing box squats.