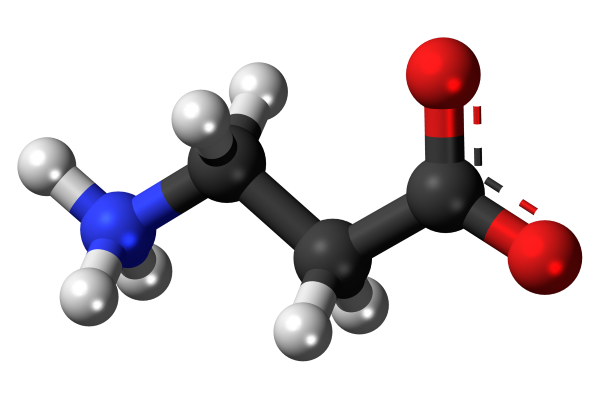 The likelihood of life-threatening situations resulting in a post-traumatic stress disorder may be reduced by taking the performance-enhancing amino acid beta-alanine. Jay Hoffman and Jeffrey Stout of the University of Central Florida suggest this in Amino Acids.

Post-traumatic stress disorder
Many people who have been involved in some kind of life-threatening situation remain affected by it for the rest of their lives. They may be plagued by flashbacks and nightmares; they may be quick to show anger, constantly on the alert, unable to concentrate well or emotionally shut off. Psychologists refer to this constellation of symptoms as post-traumatic stress disorder.

Beta-Alanine
Some people are psychologically so resilient that they do not develop post-traumatic stress disorder even after having been in life-threatening situations. A few months after the event these people show noticeably fewer signs of stress. Hoffman and Stout wondered whether supplementation with beta-alanine [structural formula shown above] might increase psychological resilience.

BDNF
Beta-Alanine boosts the concentration of the peptide carnosine in the cells. As a result of this the more BDNF [structural formula shown here], a growth factor that enables the brain cells to make new connections, is produced in the brain.

Study
The researchers gave half of a group of rats 100 mg beta-alanine per kg bodyweight every day for a month. The human equivalent of this dose, for someone weighing about 90 kg, would be about 1500 mg per day [BA]. The other half of the group were given a placebo [PL].

The researchers then placed half of the beta-alanine and half of the placebo rats in a cage containing cat faeces for 10 minutes [PSS]. Rats that are genetically programmed to avoid cats will be terrified in this situation. The remaining groups were not subjected to stressful treatment [UNEX].

After this the researchers let the rats run around in a network of runs that the rats knew, but that had been extended with an extra path.

Results
The rats that had been exposed to cats’ faeces and that had not been given beta-alanine [PSS+PL] entered the new pathway less frequently and spent less time there than the other rats. That’s logical: stress makes rats – just like people – afraid of new things and reduces the impulse to discover new things.

The beta-alanine supplementation had boosted the carnosine concentration in the hippocampus, a vital organ in the brain that intermediates between body and mind and between emotions and intellect. The production of BDNF had decreased in different of the hippocampus in the PSS-PL group, but this had not happened in the PSS+BA group.

Conclusion
“The protective effects associated with elevations in brain carnosine appear to be related to a protection of BDNF expression in the hippocampus”, the researchers concluded. “The precise mechanism of how elevated carnosine concentrations support BDNF expression requires additional research. This appears to be the first study known to demonstrate a potential role of bèta-alanine as a dietary supplement for the treatment or prevention of post-traumatic stress disorder.”

The study was sponsored by Natural Alternatives International, a manufacturer of beta-alanine supplements. [nai-online.com]