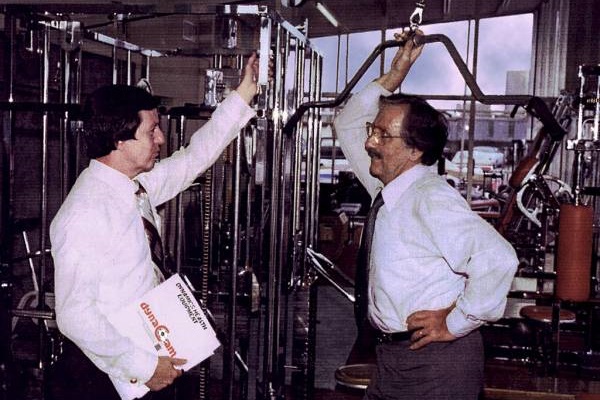 The fitness world is in a constant state of flux. It’s like a kid trying to balance a see-saw on his or her own, running from one end to the other. This flux is created by a response to trends we see, and the over-reaction to problems they cause.

A great example of this is jogging and bodybuilding. The jogging craze was born in the 1970s, as a result of Cooper’s research into the aerobic system to create better soldiers. But jogging tends to make people skinny. That put Arnold and Joe Weider in the best possible position to market bodybuilding in the early 80s. During the 80s and 90s, bodybuilding ruled the roost in the fitness world. As a side effect, we ended up with big gyms filled with an array of machines that locked you into a single position and plane of movement.

The result was a bunch of seemingly fit and strong people who lacked performance to match their physiques. Bodybuilding created men who looked like Tarzan, but played like Jane. But in the early days of bodybuilding, champions were every bit as strong as they looked, and were often capable gymnasts as well as handy lifters. So where did we go wrong?

Despite people loving black-and-white answers, the truth of training is that the best results for most are in the grey area between. Bodybuilding isn’t evil, if you forget the drug-bloated farce professional bodybuilding has become and understand that the purpose of bodybuilding is adding mass and having a pleasing body.

The biggest problem with most bodybuilding training from a function point of view is the single-minded focus on time under tension. There is a way to maintain athleticism, build power, and boost muscle growth all at the same time. To do so we’re going to use a little trick called post-tetanic potentiation (PTP). The short explanation of PTP is that if you lift something heavy, you will be able to lift more for the five- or six-rep set than if you hadn’t done the one-rep set prior.

We’re going to use PTP for two objectives: to build as much muscle as possible while at the same time maintaining or even increasing power and speed. To achieve this, we will use both quick lifts like the Olympic lifts or their variations, as well as slower powerlifting moves such as the deadlift, squat, and bench.

The basic format is the 1-6 system I first saw written about by Charles Poliquin and Ian King. This system focuses on a heavyish one-rep lift that is then followed by a six-rep lift of the same movement. While this is better from a hypertrophy point of view, we are after athletic development, too. As we’re concerned with how we move, we’re going to remember that we don’t train muscle groups but muscle actions.

“Interestingly, you often end up able to lift more as the session progresses, because of the amplifying effect the training has on the CNS.”

For example, instead of using just thinking of the deadlift as a lower body training exercise, we’re going to work on our hinge by using the power clean and then transition to the deadlift. Interestingly, you often end up able to lift more as the session progresses, because of the amplifying effect the training has on the CNS.

When this method was first written, there were two rep options: either 1-6 or 2-5. Both will work just fine, and my preferred option is the 2-5 as I am not a fan of 1-rep efforts in the gym. If you choose the 1-6 method, start your first set of 1 on what would be a 2RM for you. If you use 2-5, start on a 3RM. In other words the lower rep sets should be hard but not on the limit.

This system focuses on a heavyish one-rep lift that is then followed by a six-rep lift of the same movement.

While this is a productive workout as it stands, we’re going to use one more PTP trick to really boost both strength and size as much as possible – back-off sets. After lifting heavy, dropping the weight down and adding reps is seemingly easy. To take advantage, add in a back-off set of deadlifts for twenty reps.

For a squat-dominant pattern you might choose to use jumping and back squats. The only caution here is that a set of jumps is unlikely to be productive with only a rep or two. You may need up to about ten if you choose to use jumping. After the jumps, perform a set of heavy squats for five to six reps. Repeat in the same fashion, following the format of the deadlift example. Follow the 1-6/2-5 sets with a back off set of squats for 20 reps.

“Ben Johnson used to use this protocol to great effect, performing a set of heavy work in the gym for a small number of reps before heading out to the track and sprinting as fast as he could.

Rests between sets will need to be slightly longer than you think. Two to three minutes as a minimum between each exercise will be about right, but don’t feel rushed.Cyou can wait up to ten minutes and still the see the heightened CNS effect from the heavy set. Ben Johnson used to use this protocol to great effect, performing a set of heavy work in the gym for a small number of reps before heading out to the track and sprinting as fast as he could.

This method of training is great for grapplers and fighters who need to add size while staying as strong and explosive as possible. The addition of the power exercise instead of another slower, grinding movement means extra CNS recruitment. Often fighters slow down with the huge amount of conditioning they do, as power is one of the first things that can be affected from endurance work. So keep the power movements in there and use grinding movements to do the higher rep work.

The addition of the power exercise instead of another slower, grinding movement means extra CNS recruitment.

Poliquin says you can only follow a workout for so long before you get stale. Follow the format below for six weeks and then change things up.

After following the six workouts using this intense method, I suggest moving onto an accumulation plan and focusing on volume instead of heavy loads with a greater focus on conditioning. A perfect segue is using complexes, which combine higher volume with plenty of incidental conditioning, while still pushing you towards functional mass gain.

And, of course, don’t forget to eat the house down.