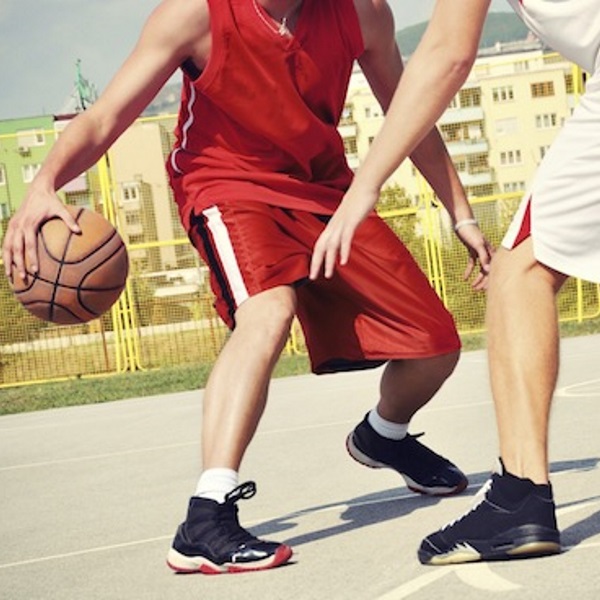 Athletes are often conditioned to think that all workouts have to be serious undertakings in the gym. Fun workouts, though, can be a great way to take a step back and recalibrate your training—or you can use them when you feel stuck in a rut.

It’s In the Cards
A great way to switch up your workout and introduce a little unpredictability is to employ a standard deck of cards. Assign one exercise per suit and shuffle the deck. When you pick a card, perform the exercise for the number of reps shown on the card (face cards equal 10 reps.)

The great thing about this workout is that you can choose bodyweight exercises (e.g., Push-Ups, Pull-Ups) or weighted one (Squats, Presses, Curls, etc.) to challenge your whole body. You can either go through the 52-card deck by yourself, or get a partner in on the action. No matter what you decide, you’ll keep your body guessing throughout the workout and have fun doing it.

40-Yard Dash Races
Football players know all about the 40-Yard Dash, the drill designed to measure their acceleration and top-end speed. Introduce some competition into your workouts by squaring off against a few teammates to determine the fastest runner. Pair runners against each other.

Generally, it’s a good idea to have runners of similar speeds face off (e.g., wide receivers vs. defensive backs), but the key is to have fun with it and let your competitive fires burn. Athletes can go at it in a best-of-three competition. Set the contest up on a field or track, where runners have enough time to decelerate safely.

Max Out in Strength
If you host speed races, you should also pit athletes against each other in tests of strength. Get lifters together in groups of three to five, and have them to compete to see which team can lift the most weight—e.g., in the big three powerlifting lifts (Squat, Bench Press, Deadlift). Have the athletes tally up their three- and one-rep maximum weights. The team that lifts the most combined weight wins. It’s a great opportunity to mix the strongest athletes with others on the team in a competitive setting.

Athletes will naturally work to win the contest, but it’s also important for them to track their progress. Hold at least two max-effort contests, at the beginning and end of a training cycle, and record the weights lifted. From the start of the program to the finish, athletes should have a real measure of how much they improved over the course of the program.

Break Out of the Comfort Zone
Many athletes and teams spend too much time preparing for their sport. They need a break. When this is the case, push them out of their comfort zone and have them try a new sport. Instead of holding a traditional wrestling practice, break out the basketballs and have the players go 5-on-5 full court. Let the basketball team play Ultimate Frisbee, or have offensive lineman run receiving drills up and down the route tree. The point is to break athletes’ focus on a match or game and have them enjoy training, especially if they are in the midst of a long off-season.

With all the attention paid to training today, athletes can lose sight of the fact that they should be having fun. They don’t need to have fun workouts every week, but it never hurts to incorporate fun stuff into their long-term plans.