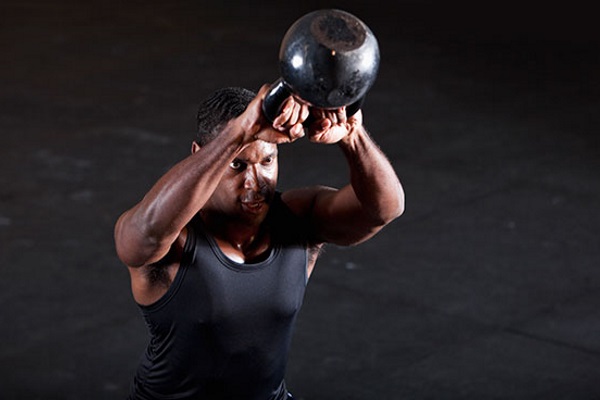 We’re huge fans of running. It allows you to get a stress-reducing, endurance-boosting workout with just a pair of shoes and an open road.

It also burns calories, of course. At a 10-minute per mile pace—roughly the average guy’s marathon pace—you’ll fry about 10 calories a minute.

That’s a solid number, and if you run faster, you can burn even more.

But if running isn’t your favorite activity, there are plenty of other modes of exercise that can help you torch calories at a lightning fast rate.

“In general, you burn more calories by doing high-intensity weight training than you do running,” says Harold Gibbons, a trainer at Mark Fisher Fitness in New York City and the New York State Director of the National Strength and Conditioning Association.

Most people don’t realize this, though. That’s often because the number of calories you’re told you just burned is typically estimated from The Compendium of Physical Activities, which calculates energy expended through aerobic metabolism. That works well for low- to medium-intensity exercise, but not so well for higher-intensity activities that rely on anaerobic metabolism.

In fact, when researchers at the University of Southern Maine used a more advanced method to estimate energy expenditure during exercise, they found that weight training burns up to 71 percent more calories than originally thought. Which suggests that a fast-paced circuit workout burns as many calories as running at a 6-minute per mile pace.

But resistance training isn’t your only option. There are also cardio exercises that can boost your burn. We found 10 exercises that will help you incinerate calories—without ever having to hit pavement.

Kettlebell Swings
This explosive exercise works the big, powerful muscles around your glutes and quads, and sends your heart into overdrive, according to research from the University of Wisconsin.

In the study, participants burned 20.2 calories a minute and their average heart was 93 percent of its max for the course of a 20-minute workout.

“The kettlebell swing works you so hard because it’s not a movement you’re used to,” says Dan John, a strength coach in Salt Lake City and the author of Intervention. “You’re not super efficient at it, which taxes your body.”

Indoor Rowing
A 185-pound guy can burn 377 calories during 30 minutes of vigorous rowing, or about 12.5 calorie per minute, reports a Harvard University study.

And because you need to utilize the muscles in your arms, legs, and back for efficient strokes, it’s a great total-body trainer.

Burpees
A 180-pound person burns about 1.43 calories per burpee, says exercise scientist and Spartan Coach Jeff Godin. So if you can hammer out at least seven a minute, you’re in the double digits.

But you should shoot to average at least 10 every 60 seconds, or a rate of 14.3 calories per minute. Why? Performing just 10 reps at a fast pace can rev your metabolism as much as a 30-second, all-out bike sprint, according to a study presented at the American College of Sports Medicine annual meeting.

AirDyne Bike Sprints
It sounds downright crazy, but Gym Jones manager Rob MacDonald proved that it’s possible to blast 87 calories in one minute on this stationary bike that increases its resistance as you pedal harder.

The key: Give everything you have in that 60 seconds.

Note: This was by no means a scientific experiment, and it relies on the accuracy of the built-in AirDyne monitor, which calculates calories by converting revolutions of the fan into physical work.

Jumping Rope
Moderate-intensity rope jumping—about 100 to 120 skips per minute—burns about 13 calories a minute, according to the Compendium of Physical Activities.

This mode of exercise uses more muscle groups than jogging, and challenges your balance, and coordination—especially if you practice drills that require extra hand and foot skills.

Fat-Tire Biking
If you haven’t tried this fast-growing cycling sport, you should. You can burn up to 1,500 calories an hour—or nearly 25 calories per minute—pedaling the heavy, hard-to-turn monster bikes and tackling all types of terrain, all year round, says Mike Curiak, record holder for the 1,000-mile Iditasport Impossible, a fat tire biking race.

Reality check: That kind of calorie burn depends on your fitness and strength levels, and your skill. But regardless, it’s sure to be one hell of workout.

This CrossFit Workout of the Day (WOD) burns an average 13 calories per minute, according to scientists at Kennesaw State University.

It’s effective because it pairs three exercises—5 pullups, 10 pushups, and 15 air squats—that work different major muscle groups, and you do as many rounds as possible in 20 minutes.

So if you’re in amazing condition, you can go all-out for each one, without slowing down or stopping to recover in between.

If you’re somewhat less than amazing (read: like most people), you simply rest when needed. For example, you don’t move on to the pushup until you’ve completed 5 reps of the pullup, even if you have to stop and start.

“Any routine that takes you from standing, down to the ground, and back up to standing again is an amazing calorie burner, because it really spikes the heart rate,” says John.

Cross-Country Skiing
Zipping along on skis delivers a better heart-pounding workout than running at about the same pace, thanks to the fact that the sport requires you to push with your lower-body and pull with your upper.

In fact, a good cross-country ski session can burn more than 12 calories a minute, according to the Compendium of Physical Activities.

That explains why Nordic Skiers consistently collapse in exhaustion at the finish line of Olympic races. (No fresh snow? Look for the new Concept2 SkiErg machine at your gym.)

Tabata Jump Squats
This four-minute miracle drill burns major calories both during a workout and after. In an Auburn University at Montgomery study, participants who did eight rounds of all-out jump squats—20 seconds of hard work, separated by 10 seconds of rest—burned 13.4 calories per minute and doubled their post-exercise metabolic rate for at least 30 minutes.