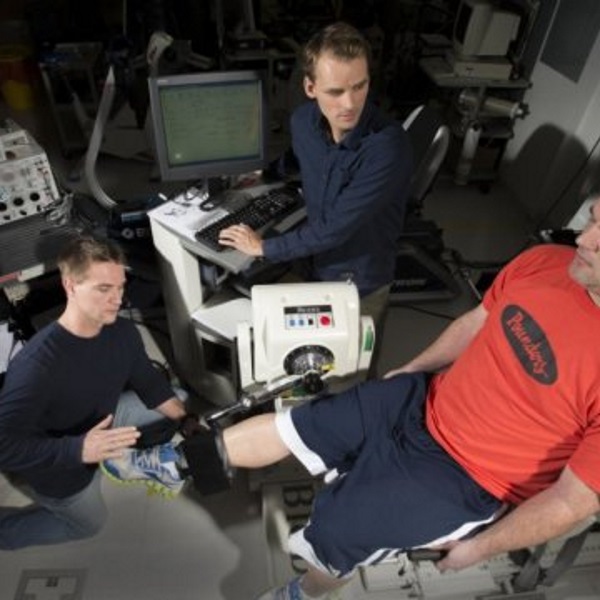 Scientists have studied the reduced-soreness phenomenon for decades, but they still can’t figure out exactly why people feel less sore the second time around. What they do know is the immune system plays some role in how the muscle repairs itself and protects against additional damage. But now exercise science researchers have produced evidence that shows for the first time the surprising presence of very specific immune workers: T-cells.

The first time back to the gym after a long break usually results in sore muscles. Fortunately, the return trip a few days later–if it happens–is generally less painful.

Scientists have studied this reduced-soreness phenomenon for decades and even have a name for it–the repeated bout effect. Despite all those years of research, they still can’t figure out exactly why people feel less sore the second time around.

What they do know is the immune system plays some role in how the muscle repairs itself and protects against additional damage. But now exercise science researchers at BYU have produced evidence that shows for the first time the surprising presence of very specific immune workers: T-cells.

“You think of T-cells as responding to infections, not repairing muscles–but we found a significant accumulation of T-cells infiltrating damaged muscle fibers,” said Robert Hyldahl, assistant professor of exercise science at BYU. “Our study is the first to show T-cells present in human muscle in response to exercise-induced damage.”

The research appears this month in Frontiers in Physiology and builds off past studies that implicate immune cells in muscle healing. One such study was a 2013 paper out of Harvard showing T-cells active in the skeletal muscles of mice (but not yet humans) after injury.

For the study, researchers, put 14 men and women through two vigorous rounds of exercise on an isokinetic dynamometer machine, 28 days apart. (“All of them got really sore,” Hyldahl said.) Before and after each bout of exercise, the team took muscle biopsies from the subjects and then used immunohistochemistry and microscopy to analyze the muscle tissue.

The BYU group found an expected increase in certain white blood cells after the second bout of exercise, but only identified the T-cells after it was suggested by Amanda Gier, one of two undergraduate coauthors on the paper, who was enrolled in an immunology course at the time.

“T-cells, up until recently, were not thought to enter healthy skeletal muscle,” said lead author and grad student Michael Deyhle. “We hadn’t planned on measuring them because there’s no evidence that T-cells play a role in infiltrating damaged muscle tissue. It’s very exciting.”

The presence of the T-cells suggests that muscles become more effective at recruiting immune cells following a second bout of exercise and that these cells may facilitate accelerated repair. In other words, the muscle seems to remember the damaging insult and reacts similarly to when the immune system responds to antigens–toxins, bacteria or viruses.

Instead, the slightly enhanced inflammatory response suggests inflammation itself probably does not worsen exercise-induced muscle damage.

“Many people think inflammation is a bad thing,” Deyhle said. “But our data suggest when inflammation is properly regulated it is a normal and healthy process the body uses to heal itself.”

Adds Hyldahl: “Some people take anti-inflammatory drugs such as Ibuprofen and Aspirin after a workout, but our study shows it may not actually be effective. The inflammation may not be directly causing the pain, since we see that muscle soreness is reduced concurrent with increases in inflammation.”

The above post is reprinted from materials provided by Brigham Young University. The original item was written by Todd Hollingshead. Note: Materials may be edited for content and length.