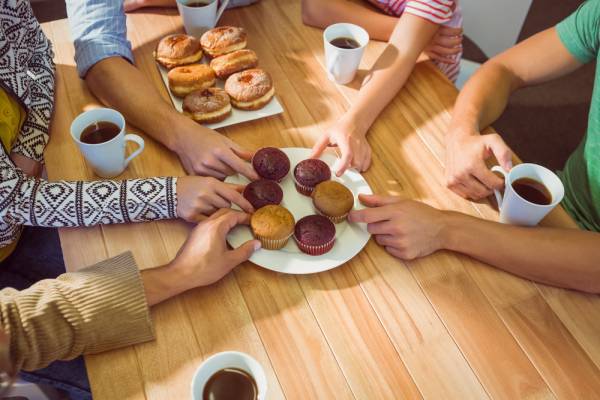 As a figure competitor, contest prep coach, and weight management specialist, I am open about my use of artificial sweeteners in my own diet and allow my clients to make their own decisions regarding whether or not to implement products containing these ingredients. But I generally don’t advise against them.

Artificial sweeteners have gotten a bad rap in the past, but the evidence is lacking.

I share many recipes, diet products, and meal ideas that contain or include artificial sweeteners. After assessing the scientific evidence, monitoring my own personal experience, and combining these findings with other anecdotal sources, I am content with my decision to use artificial sweeteners to enhance my enjoyment when dieting.

There are a number of things I considered before implementing sweeteners on a regular basis, and we’ll go through those one by one. But first, let’s clear up what classifies something as an artificial sweetener, because let’s be honest – it can get confusing.

Natural sugars are complete sugars with four calories per gram. These are something I don’t recommend to be included in any diet, as there’s no need for added sugars. However, food marketing has done a remarkable job at making things like “organic cane sugar” seem like a healthier alternative, when realistically it has the same negative effect in the body as other sugars.

“After assessing the scientific evidence, monitoring my own personal experience, and combining these findings with other anecdotal sources, I am content with my decision to use artificial sweeteners to enhance my enjoyment when dieting.”

Sugar alcohols, on the other hand, have fewer calories than natural sugars, varying from one to three calories per gram depending on the type. Certain types are also less likely to influence blood sugar in the same way as true sugar, as they are not completely absorbed and metabolized by the body.6

Finally, artificial sweeteners, while possibly still having an influence on blood sugar and insulin levels, have no caloric value in and of themselves.4

With artificial sweeteners, you can satisfy your sweet tooth without blowing your calorie intake.

Since their inception, artificial sweeteners have been scrutinized, specifically when it comes to health and the potentially negative effects that may be caused by their consumption. But many of the negative claims are based on out-dated research, such as a 1970s study linking one form of sweetener to cancer in rats.3 The majority of these studies are non-generalizable to the human population as they are based upon super-doses of sweeteners, most exceeding amounts even possible for us to consume.5

“If there are increased cravings, but these cravings are ignored or met with artificial sweetener, it is unlikely there would be an increase in weight as a direct result of the sweeteners themselves.”

When it comes to the effect of artificial sweeteners on physique, many claims are based upon correlation – not causation – which often causes confusion. Reports that the usages of artificial sweeteners leads to increased weight gain and greater rates of type 2 diabetes are likely not based on a causal relationship, as a zero-calorie product is innately unable to lead to direct weight gain.

However, the likelihood of increased preference for the sweet taste of artificial sweeteners (much sweeter than traditional sugar) and continued preference for “sweet” foods, may lead to weight gain in individuals who fulfill these cravings with calorie-laden items. If there are increased cravings, but these cravings are ignored or met with artificial sweetener, it is unlikely there would be an increase in weight as a direct result of the sweeteners themselves.1

In terms of function and performance, there are claims of artificial sweeteners, such as aspartame, leading to fatigue, dizziness, headaches, and myriad other symptoms. Research supports that some people may be more sensitive to artificial sweetener than others and at lower quantities.2 However, the research is inconclusive and many of these effects can also be correlated with other potential causes such as sugar withdrawals, crash dieting, hunger, and even a possible placebo effect.

“My health has remained the same and, if anything, improved as a result of being able to replace many of my favorite sugar-laden foods with a sugar-free alternative.”

There don’t appear to be any conclusive studies reflecting long-term health effects as a result of artificial sweeteners and the FDA has outlined a recommended daily intake for each type of sweetener that is approximately one hundred times less than what is believed to be the quantity at which a person’s health may be negatively influenced.

Note: If you experience negative symptoms in relation to the consumption of artificial sweeteners, you may be one of the few who are intolerant and it may be best to avoid them completely or monitor the quantity of your intake to avoid potential side effects.

Based upon research and having implemented artificial sweeteners into my diet on a regular basis for the better part of three years, I have concluded for me, personally, there are no (obvious) negative effects on my health, physique, or function.

My health has remained the same and, if anything, improved as a result of being able to replace many of my favorite sugar-laden foods with a sugar-free alternative. Although I have never eaten sugar on a regular basis, in the past when it came time to celebrate or have a treat meal, I often craved things like ice cream or frozen yogurt. Now, I can enjoy these in a sugar-free version while still satisfying my sweet tooth.

“I have assessed my mood, energy level, strength, and focus throughout weeks with no sweeteners whatsoever in comparison to weeks where I consume sweeteners multiple times a day. I honestly can’t tell the difference.”

When it comes to physique, I have built a national-level physique while keeping artificial sweeteners in my diet all the way to stage and while reaching extremely lean body-fat levels. In the past, I prepared for shows without sweeteners, cutting them out to ensure no negative effects. But at my most recent shows, I left them in all the way through show day with no obvious differences in physique.

In terms of function, both mental and physical, I notice no difference whether I am consuming sweeteners or not. I have assessed my mood, energy level, strength, and focus throughout weeks with no sweeteners whatsoever in comparison to weeks where I consume sweeteners multiple times a day. I honestly can’t tell the difference. If anything, my mood is probably better with the sweeteners because my diet is more enjoyable!

If anything, I’ve noticed a positive change since I’ve started using artificial sweeteners.

To Each Their Own

Like all things in the world of fitness and nutrition, I expect that opinions on artificial sweeteners and health will continue to be split. By doing your own research and assessing your own experiences with these products, you will be able to make the best decision to suit your body and lifestyle.

And if you’re unsure, why risk it? You’re sweet enough as it is!