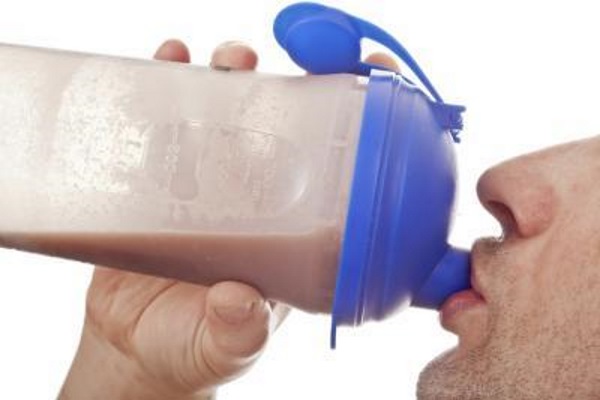 If you drink a small whey shake before doing a strength workout, your muscles will get more out of it than if you drink the shake after the training session. Sports scientists at the University of Birmingham found evidence of the superior effect of pre-workout shakes when they did experiments with 17 subjects in their twenties.

Study
The researchers gave their test subjects a shake containing 20 g whey. The eight subjects in the pre-group drank their shake immediately before doing their training on the leg-extension machine. They did 10 sets of 8 reps with 80 percent of the weight at which they could just manage 1 rep.

The nine other subjects in the post-group drank their shake 60 minutes after finishing their workout.

Results
The researchers used catheters to measure the amount of the amino acid phenylalanine that the subjects’ leg muscles absorbed. During the first four hours there was no difference [figure below], but in the fifth hour they did see a difference [second figure below].

In previous studies the researchers had given the subjects free amino acids before and after their leg training sessions. These studies showed that, if you ingest amino acids after a strength workout, the muscles benefit more from them if you wait 60 minutes after finishing the workout rather than taking them immediately afterwards. That’s why the test subjects this time round didn’t drink their whey shake immediately after finishing training, but first waited 60 minutes.

In an earlier study [Am J Physiol Endocrinol Metab. 2001 Aug;281(2):E197-206.] the Brits gave their subjects a shake containing 35 sugar and 6 g free amino acids. On one occasion 6 subjects drank their shake just before training their legs, and on the other occasion immediately after the workout.

The figure below shows that the muscles took up more phenylalanine when the subjects got their amino acids just before the training session.

Going by their earlier studies, the researchers had expected to see a clearer effect from the pre-workout whey shake. They suspect that they underestimated the amount of time the body needs to absorb the amino acids in the whey. “It is possible that consuming proteins at other time points before exercise, e.g., 30, 45, or 60 min, may have resulted in greater amino acid levels and increased delivery”, they write.