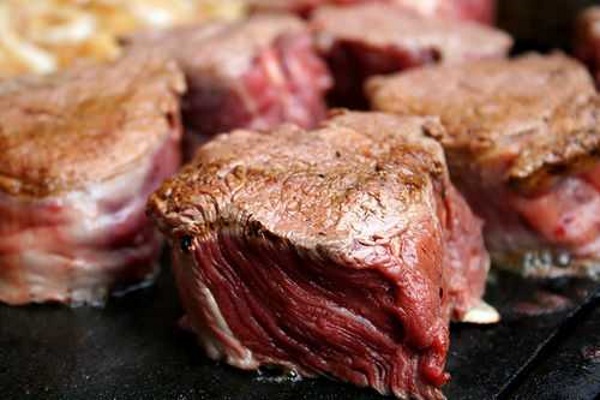 A scientist does experiments with human test subjects and becomes famous. That’s how it usually goes. But in the 1920s it happened once the other way round, when the explorer Vihjalmur Stefansson allowed scientists to use him in a bizarre nutrition experiment in which he ate only meat for a whole year. The experiment did make him even more famous than he already was.

Stefansson had lived for many years with the Eskimos, or Inuit as they are called these days. He had noticed that on a diet that consisted almost exclusively of fish and meat, these ice-dwellers nevertheless remained healthy.

Impossible, was the nutritionists’ verdict.

Is so, said Stefansson. To prove his point he and another explorer, Karsten Anderson, decided to eat only meat for a whole year, under medical supervision at the Bellevue Hospital in New York. Not fish, as the Inuit did, but meat from farm animals.

That fish contains beneficial fatty acids and meat some bad ones was not known at that time. The experiment therefore says little about the healthy Inuit that Stefansson had got to know. But even in the twenties the experiment was very controversial, as Stefansson recounts in his article Adventures in Diet, which appeared in November 1935 in Harper’s Monthly Magazine.

“A storm of protests from friends broke upon us when the press announced that we were entering Bellevue”, wrote Stefansson. “These were based mainly upon the report that we were going to eat our meat raw and the belief that we were using lean meat exclusively. The first was just a false rumor; the trouble under the second head was linguistic.”

To only eat lean meat would be impossible, Stefansson knew this from experience. Primitive peoples who are dependent on fish and meat for their diet do their best to make sure they eat enought fat. If they eat too much lean meat they get sick.

Explorers know about this too. In situations where there is only lean meat, for example on an uninhabited island where the only source of food is half-starved rabbits, they develop rabbit starvation syndrome. Which can be fatal, by the way.

During the experiment a doctor managed to persuade Stefansson to at least try eating only lean meat for a short period, but Stefansson became ill. He developed nausea and diarrhoea. He recovered, by his own account because he added calves’ brains to his diet. During the experiment the men got about a quarter of their calories from protein. The rest they got mainly from fat.

The entire reports for the experiment can be found on the internet. They are considered classics by the low-carb movement.

The relationship between the researchers and the famous pole explorer was not an easy one. The research was led by Eugene DuBois, who was fairly contemptuous of the diet. He tried it out himself for a couple of days, but soon gave up. DuBois’ description of his main test subject is also fairly unflattering.

“Physically, he was a well developed man, although his muscles were soft and somewhat flabby. His teeth contained many fillings and a mild gingivitis was present”, DuBois wrote of Stefansson.

The experiment entered the annals of the low-carb movement as the proof that you can live on meat alone for a year without damaging your health. At least, that was the conclusion that the researchers drew. But if you read the studies from the perspective of today’s understanding of nutrition and health, you wouldn’t be so sure.

The men lost large amounts of calcium – some days they lost about 400 mg. Meat contains little calcium, but the calcium metabolism cycle continued in the men’s bodies. [J. Biol. Chem. 1930 87: 669-680.] Even more serious is what happened to Karsten Anderson after a year on the meat diet.

In the spring of 1929 the polar explorer developed “pain in the right chest, a severe chill, and rapidly rising temperature. The next day the sputum was rusty in color, the temperature was 40 degrees”, the researchers wrote. [J. Biol. Chem. 1930 87: 651-668.]

“A diagnosis of lobar pneumonia was made”, the researchers wrote. After treatment the polar explorer recovered. However, according to modern cardiologists Stefansson might have gotten a heart attack. Not that strange when you consider that the subjects’ cholesterol level rose to 800. Cardiologists consider a total cholesterol count of 240 to be the level at which you need to intervene because of the danger of a heart attack.

At that time however, the link between cholesterol and heart attacks had not been discovered. Neither Anderson’s chest pains nor the cholesterol count changed the researchers’ conclusion. After the experiment had ended, Stefansson would often refer to it in articles and talks he gave. As far as he was concerned, it was ‘scientific proof’ that a meat-only diet was healthy.

The sponsors of the study must have been delighted.