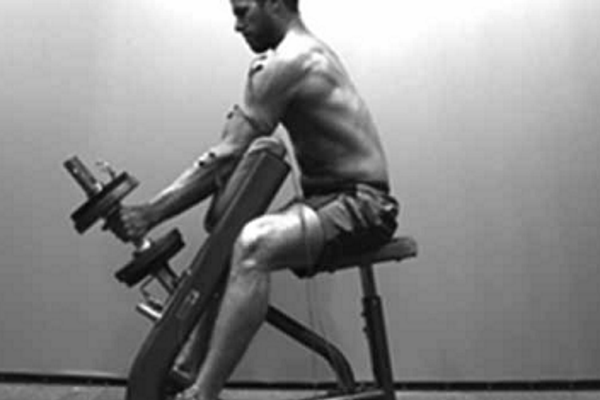 In today’s SuppVersity feature article, I am going to address not one, but two potentially highly relevant articles from the Journal of Strength and Conditioning Research (Looney. 2015) and the European Journal of Sport Science (Hiscock. 2015). What makes these papers interesting is the fact that both investigated the effect of commonly prescribed remedies to “bust a plateau” by providing novel growth triggers: (a) Training to failure and (b) modifying rep schemes and whether you fail or don’t fail on every set.

If you believe in what you can read in many articles on strength training, both, training to failure and decreasing rest times / drop sets should significantly increase the muscle activity and thus – this is the most important thing – the number of motor units that are recruited during the exercises.

But is this actually true? I mean, is there a link between EMG activity, the number of motor units that are firing and the way you train? I guess, it would be wise to take a brief look at the pertinent research before we get to design and results of the individual studies. So, what do we have? As Looney et al. point out, motor unit activity can be measured through electromyography (EMG) which is commonly considered to reflect the neural drive to the muscle. Since the electrical impulse should be proportional to the number of motor units that are firing and in view of the fact that the latter determines the acute force output, it should be obvious that increasing force demands result in higher EMG amplitude due to the greater recruitment of motor units and faster firing rates necessary to increase the contractile force.

Unfortunately, more does not necessarily help more. If you take a closer look at the existing research you have to realize you cannot stretch this proven increase of the EMG amplitude (Carpentier. 2001; Fuglevand. 1993; Lind. 1979; Masuda. 1999; Mottram. 2005; Petrofsky. 1982) infinitely. Over prolonged exercise / contraction times, the initially increasing firing rates will eventually decrease. That this is the case is interpreted by many scientists as evidence of the the fact that the initial rise in EMG amplitude is just a compensatory mechanism for sustaining contractile force as fatigue accumulates (when the individual fibers fatigue, more are recruited to sustain the same force). This hypothesis appears to be confirmed by numerous investigations that have demonstrated that EMG amplitude increases during dynamic exercise as the extent of the effort, or number of repetitions performed, increases (Hasani. 2006; Spreuwenberg. 2006; etc.).

Why is it even important that all muscle fibers contract? The reason should be obvious, but I am happy to explain it once more. It is the contraction that’s responsible for the exercise induced increase in GLUT-4 receptor expression and mTOR phosphorylation. In view of the fact that the latter determine the increase in glucose uptake and protein synthesis after a workout, you obviously want as many muscle fibers to contract as possible. Or, to put it differently: If you don’t use it you won’t grow it, bro… well, at least not to the same / optimal extent.
This is where the “train to failure to maximize motor unit recruitment”-theory comes from. After all, this observation indicates that usually inactive motor units are going to fire only during prolonged training at high intensities (best to failure). As usual, though, there are problems with this theory:

Needless to say that we all expect that lighter weights can stimulate greater motor unit recruitment, if you use them in dropsets, but as Looney et al. say, the science that would conclusively confirm that is simply not there (yet). The goals of Looney’s study were thus as follows:

As the authors rightly point out, the “findings of this investigation would provide critical information on understanding the changes in neuromuscular physiology during dynamic exercise related to variable levels of target repetitions, resistance, and fatigue” (Looney. 2015) and may thus be of great value to scientists (initially, because the would have to still check the practical consequences of any increases in motor recruitment) and coaches + athletes (later). What the Hiscock study in which the researchers evaluated the rate of perceived exertion (RPE) and its correlation with muscle activation and lactate levels can add to the table is information on the effect of another parameter: Different rest times.

Don’t forget that form, time under tension and the range of motion matter, as well. In 2013, for example, I discussed the results of a study by McMahon et al. that leaves little doubt that the increased mechanical stress and workload (remember work is the product of force x time) from doing exercises over the full range of motion will trigger greater morphological and architectural adaptations in response to resistance training than doing the same exercises over only a partial range of motion. Unfortunately, the evidence in favor of the significance of optimal form (beyond going over the full range) and the time under tension for optimal gains is less convincing and in parts contradictory.

The analysis of the EMG data yielded overall unambiguous results: The maximal repetition sets to failure at 50% and 70% 1RM resulted in higher peak EMG amplitude than during submaximal repetition sets with the same resistance. In view of the fact that the peak EMG amplitude was significantly (P ≤ 0.05) greater in the maximal 90% 1RM set than on any of the other sets the subjects performed, the classic drop set with 90%, 70% and 50% 1RM should thus still have an edge over any regular “low intensity + high rep to failure” single set training. The question remains, however, whether it will also have the edge over conventional training? 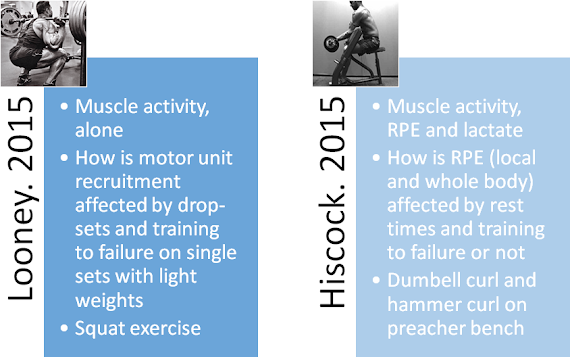 We will get back to that question in the bottom line. In the mean time, let’s briefly take a look at another, quite surprising result, one that will also lead us to the results of the previously mentioned study by Hiscock et al. (2015): The lack of association between the ratings of perceived exertion (CR-10). In contrast to what most of you certainly expected, the fatigue levels did not differ over the intensity range of loads and did not reflect the degree motor unit recruitment in any way (see Figure 3). You as an individual without the necessary technical equipment are thus probably unable to tell hor many motor units you’ve actually recruitment in a workout; and – even more importantly – the mere fact that you have to crawl instead of walk out of the gym is not a sign of a productive workout.

You don’t want to believe that? Well, bad luck for you: This result appears to be confirmed by Hiscock’s study, in which 10 recreationally trained (>12 months of previous resistance training) did DB Curls and DB Hammer Curls on the preacher bench for three sets with their preferred arm at a constant load of 70% of their individual 1-RM over 4 trials:

After each of the exercises the participants rated their overall and active arm muscle rate of perceived exertion (RPE-O and RPE-AM) and the data was correlated with the biceps brachii and brachioradialis muscle EMG activity during each set for each trial. 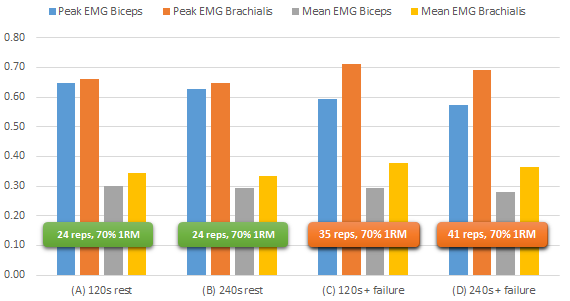 Figure 5: Despite sign. higher volumes (see boxes) and a 100% increase in rate of perceived local muscular exertion there was no significant increase in muscle activity with lifting 70% of the 1RM for 8 vs. to failure (Hiscock. 2015).
Just like in the Looney study, the measured rates of perceived exertion in the Hiscock study had did not correlate with with either the muscle activation or the lactate accumulation in the biceps. Rather than that, it appears as if the subjects’ bicepses didn’t even care about rep schemes and failure. While the RPE increased significantly, when the subjects trained to failure, the mean and peak EMG activity levels in Figure 5 are more or less identical for all rep x intensity (+/- failure) schemes.

So what’s the significance of the results, then? If you put some faith into Looney’s conclusion, it is that the results of his (and I may add Hiscock’s study, too) confirm “previous recommendations for the use of heavier loads during resistance training programs to stimulate the maximal development of strength and hypertrophy” (Looney. 2015).

Reducing the load and training to failure (Looney’s “single set” day) or reducing the rest times and or switching from a set rep number to training to failure (Hiscock’s groups A-D), on the other hand, has no effect on motor recruitment and could, in view of potentially increased recovery times due to higher rates of perceived exertion w/ training to failure, rather hinder than facilitate rapid strength and size gains. Whether the same is the case for the drop-set, though, is not 100% clear. With the peak muscle activity occurring in the first set, you cannot argue that the stimulus was weakened. On the other hand, there’s a proven reduction in total volume (reps x weight | Melibeu Bentes. 2012) of which long-term studies would have to investigate whether the can impair your strength and size gains.

Overall, there is still little doubt that the results of the two studies I discussed today support the notion that “going heavy” is still the way to activate a maximal number of muscle fibers. Whether this does also mean that it is necessarily the best way to make those fibers grow and or increase their glucose uptake, however, is still not fully proven. The same goes for the usefulness of training to failure, of which some studies suggest that failure does not matter, while others appear to indicate that “failing” is almost necessary to maximize your gains – as usual, I’ve written about both of them and will continue to do so in the future, so stay tuned if you want to be among the first to learn what works best for strength and hypertrophy training 😉 | Comment on Facebook!