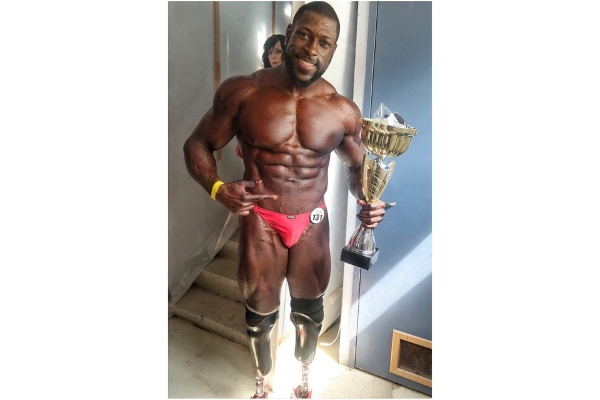 Meet the man known as the Bionic Body.

Bodybuilding is as much about genetics as it is about the hard work you put forth in the gym. Some people are fortunate enough to born with the kind of genes that can transform them from just a would be amateur to a bonafide bodybuilding champion in record time. Just ask Phil Heath whose superior genetics brought him success in not only bodybuilding but in his collegiate basketball career.

There are many people who may not have the most blessed genetics but can still throw down in the gym, so much so that they can overcome their inadequacies. But what about those that may have had the talent and genetics to bring them to the pinnacle of the sport, but were hindered by unfortunate circumstances that has seen their dreams derailed? Does an amputee still push himself to the brink? Do they continue to strive for greatness in bodybuilding despite the loss of a limb? Do they even have the ability to build an impressive physique?

Well if anyone had doubts about the ability to make major gains even while being disabled then take a look at this pic of double amputee known by his Instagram handle as the Bionic_Body, real name Edgard John-Augustine, and tell us it’s impossible.

It’s clear that John-Augustine has a great physique and one can only wonder what he can accomplish on the IFBB stage. Being honest, the man has an impressive physique that could rival some of the top bodybuilders out there today.