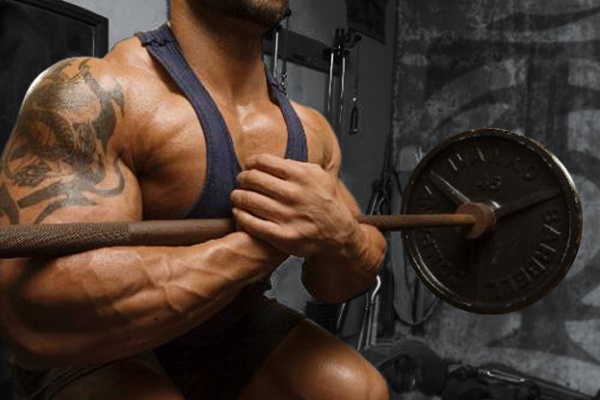 The Squat You Never Do
The Zercher squat can build quads better than the front squat. It can jack up your traps better than shrugs. It can give you a core of steel faster than most ab work. It can even give you bigger biceps.

But you probably aren’t doing it because:

The Zercher Lifts
“Zercher” refers to the placement of the bar. You hold it in the crook of your elbows, cradling it on your torso. With the barbell in that position, you can either squat down with it (Zercher squat), walk with it (Zercher carry), bend over like a Romanian deadlift (Zercher good morning), or hold it for time (Zercher hold).

To do the Zercher deadlift, you’d get the bar in the crook of your elbows when it’s on the “floor” and deadlift it up. Few people can do this from the actual floor because of mobility and leverage limitations, but you can either start it in the power rack or on blocks so that the bar is under the knees.

Then there’s another movement you can do in which you lift the barbell from the floor like a deadlift, rest it on the thigh near the knees, squat down then put your arms under the bar, cradling it in the crooks of your elbows then you stand up with it. I call this the Full Zercher Cycle and every rep starts on the floor.

The Zercher position increases the involvement of the whole upper back musculature: the traps, rhomboids, and rear delts. So in that regard, the Zercher squat can help solidify the back during the front squat and deadlift.

If your weakness in the front squat is “losing” your upper back on the way up – your upper back rounds and the bar drops forward – then the Zercher squat will help you. If your barbell deadlift fails at knee level, the Zercher can help you there too.

Zercher squats and Zercher deadlifts can work your core harder than regular squats and deads. So if your weakness in the squat is your mid-section, the Zercher squat will be a formidable movement for you.

3. Increased glute and quad work
The Zercher squat is the squat variation that allows you to go the deepest. Yes, even deeper than the front squat.

That makes it a great movement to build the quads and glutes. But it’s also a very solid assistance exercise to increase your strength out of the whole in the squat.

4. Helpful for those with long limbs

Because of the capacity to go lower, this movement is especially effective for people with longer limbs.

Finally, this movement requires an intense isometric action from the biceps to hold the barbell in place. So while it’s not primarily a biceps-building exercise, it will contribute to making your guns bigger and stronger, especially if you use higher reps.

Drawbacks of the Zercher
1. They’re not comfortable.

Resting a heavy bar in the crook of your elbows isn’t pleasant.

So, when you do Zerchers, wear a long sleeve shirt and consider putting neoprene knee sleeves around your elbows. This makes it tolerable. Using a thick bar also makes it less uncomfortable.

2. Zerchers are a “difficult breathing” movement.

As with front squats, you can’t expand the ribcage a lot with these movements, and as a result, it’s harder to pull in oxygen. So sets of higher reps on Zerchers can become excruciating metabolically.

You think high-rep back squats are hard? They’ll feel like a warm-up after high reps with the Zercher! But that drawback is actually a benefit for athletes involved in sports where you need to perform in a state where you lack oxygen: CrossFit, MMA, wrestling, boxing, etc.

The Zercher deadlift (in which you must pick up the barbell from the floor on every rep) is a form of round-back lifting, meaning that the lift is done with the lower back rounded in the starting position.

Note that with the Zercher squat, it’s easier to keep an arched or neutral lower back position. But in the deadlift, especially if you have short limbs, it’s hard to have the lower back arched when you set up under the bar.

You should attempt to arch before you start the lift though, but it will likely stay a bit rounded or neutral.

But the neutral or rounded back might not be a huge problem if you keep the weights conservative. There’s even a theory in training (Chinese weightlifters for example) that strengthening the rounded lower back position is actually a way to prevent injuries by building muscle strength in that more vulnerable position.

How to Use Zerchers
Competitive athletes, everyday lifters, and anyone wanting size and strength should use them. Here are several ways.

To build the quads:

Zercher squats done on leg day, sets of 6-10 reps, going down under control, pausing briefly in the bottom position, going up smoothly focusing on keeping a stable torso angle.

To strengthen the mid-point of the deadlift:

Zercher deadlifts from pins/blocks (below knees) done after deadlifts for sets of 4-6 reps. Focusing on keeping the lower back tight and not raising the hips too fast.

Or Zercher squats doing sets of 4-6 reps with a slow eccentric tempo (4 seconds down), not going all the way down (knees at 90 degrees), focusing on keeping a stable torso position.

To improve work capacity in a state of oxygen deficit:

Zercher deadlift, 3-5 reps, then Zercher carry for 20-30 yards, bring the bar back to the floor. This is one interval. Do up to 5 without rest in one set. The maximum time for a set should be 4-5 minutes.

To strengthen the upper back for front squatting:

Zercher squats done after front squats, sets of 4-6 reps with a slow eccentric tempo (4 seconds down) going all the way into a full squat.

On the way up, not only should you try to keep a solid torso, but you should attempt to raise the arms/elbows – imagine throwing an uppercut with both arms – while lifting the chest up.

Zercher holds (hold the standing Zercher position) for max time. Shoot for 30-45 seconds and use an appropriate load. After the set immediately go to a set of barbell curls or your favorite biceps exercise and do 6-8 reps.

Do the Full Zercher Cycle (starting each rep from the floor) for high reps, 15-20 reps. Do not drop the bar on the floor after you lift it. Lower it back down the reverse way you lifted it.

To maximize your capacity to pull in and use oxygen:

Zercher carries for 1 minute, 20 burpees or thrusters or kettlebell swings. That’s one interval. Do up to 3 intervals in one set.

To look like a total badass in the gym:

Full Zercher Cycle working up to a maximum single.

To jack up your upper back and look like a gorilla:

Half-Zercher squat from pins. Start the bar on pins at a height where you’d have approximately a 90-100 degree knee angle.

Use a bit more torso forward bend and do a Zercher from the pins. Go back down to the pins slowly on each rep. Sets of 6-8 reps, as heavy as you can to build maximum size.

Weeding Out the Sissies
Sure, you could look at a Zercher squat, only see it as a leg exercise, and say, “I’m already doing squats, why do Zerchers?”

Don’t miss the hidden benefits of an exercise by only looking at its main impact.
Zerchers, like many other training techniques, do more for the body than what’s obvious at first glance. Seeing it as only a leg exercise would be an obtuse way of thinking to the people who’ve built stronger backs, traps, arms, and abs with them.

It’s a monster of a lift. And because it’s uncomfortable, it automatically eliminates the sissies who aren’t willing to do what it takes to make monster progress.