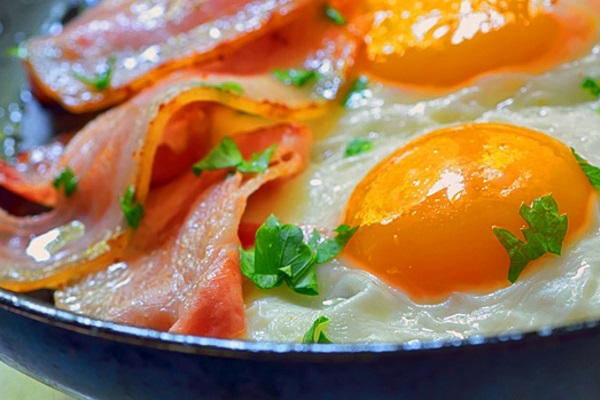 Questions About Ketosis
While the ketogenic diet has been used widely and rather effectively in some cases, there’s still a lot of confusion about it. What exactly is a ketogenic diet? How does it differ from low carb dieting?

Most importantly, at least for the T Nation demographic, is the question of whether ketogenic diets allow you to put on, or at least keep, muscle.

Ketosis: What is it?
Ketosis is a metabolic state that occurs when dietary carbohydrates are in such low quantities that your body must rely almost exclusively on fatty acid oxidation and ketone metabolism.

That sounds simple on the surface, but let’s unpack that explanation a bit.

To function, your body requires a substantial amount of energy in the form of ATP. So, let’s just assume that the average person uses about 1,800 calories per day to create enough ATP to keep him alive (not including any physical activity).

Now this is where it gets interesting. You have this thing in your skull called a brain. It uses about 400 or so calories per day and runs almost exclusively on glucose. (There’s some evidence it can use small amounts of fat and lactate, but in the big picture it’s not all that important). This means you need a minimum 100g of glucose per day just to fuel your brain.

Let’s say we cut out all carbs from our diet, in effect removing any dietary source of glucose for the brain. That means we need to get it from somewhere. Thankfully, the liver stores glucose and can pump some into the blood to fuel the brain.

Your liver, on average, can store around 100-120 grams of glucose. Awesome, so you can function for about a day, but eventually that supply is going to run out because we can’t replace it fast enough, and you’ll soon need a new source of fuel.

Your muscles are also a huge store of glucose (around 400-500 grams) in the form of glycogen. Sadly, your muscles can’t break that glycogen down to ship it out to the brain because your muscles lack the enzyme that breaks glycogen down (glucose-6-phosphatase).

Now we’re really in a bind!

Without available carbs, our liver begins to do something really interesting. It starts producing ketone bodies that are released into the blood for our brain and other tissues that don’t utilize fat for energy.

This is crucial because when you “burn fat,” you’re really taking a fatty acid molecule and converting it to something called acetyl CoA that’s then combined with oxaloacetate, which then begins the Kreb cycle (the name given to a series of chemical reactions that generates energy).

During ketosis your liver is utilizing so much fat for energy that it begins to have excess acetyl CoA hanging around and starts turning it into ketone bodies (beta-hydroxybutyrate, acetoacetic acid, and acetone).

Since your body is in need of a new energy source, your liver begins to dump these ketones into the blood stream, which can then fuel the body and brain.

Once your body reaches a state where it begins to do this continually and there are noticeable increases in blood levels of ketones, you’re officially in ketosis.

What is a Ketogenic Diet?
Now we need to define what a ketogenic diet is and how it differs from low-carb dieting.

Low carb diets make you utilize fat and carbs for your daily energy needs. Your body, however, doesn’t accumulate blood ketones and your tissues don’t require ketones for energy.

A ketogenic diet means your body has reached the point where it’s actually producing ketones in sufficient amounts that there are elevated levels of ketones in your blood and they’re being utilized for fuel.

In short, the metabolic changes are very different from those obtained by ordinary low-carb eating.

Exactly how much fat and how few carbs? Traditional, strict, keto diets are structured with about 70-75% of your daily caloric intake coming from fat and about 5% from carbs.

The range of carbohydrates you can consume and stay in ketosis varies from person to person, but you can usually get about 12% of your daily caloric intake from carbs and stay in nutritional ketosis.

Now the really important part for most people to consider is their protein intake. Most of us in the training world have it pounded in our heads that high protein intakes are the way to go and this is a large part of why forays into ketogenic diets usually fail.

Ingesting protein above certain quantities is glucogenic and will prevent you from staying in ketosis. In practical terms, consuming protein at or above .8 grams per pound is enough to kick you out of ketosis.

Ideally, an optimum ketogenic state would require you to be at about 75% fat, 5% carbohydrates, and 20% protein, which would allow you to perhaps maintain lean muscle mass.

Subjects included eight males in their late twenties/early thirties, all of whom had at least five years of training experience in off-road cycling.

Each cyclist underwent 4 weeks of a mixed diet and a ketogenic diet (KD) in a crossover design and then performed a continuous exercise protocol on a bike with varied intensity.

The KD group had significant increases in the relative values of maximal oxygen uptake (VO2 max) and oxygen uptake at lactate threshold (VO2 LT) after the KD. However, when you lose fat mass, your VO2 goes up because that’s how the analysis works. If you reduce body mass, you reduce the number in the denominator, thus you increase the relative value.

However, the max workload and the workload at lactate threshold were significantly higher after following a mixed diet.

The authors of the study ultimately concluded:

Low carbohydrate ketogenic diets decrease the ability to perform high intensity work, due to decreased glycogen muscle stores and the lower activity of glycolytic enzymes, which is evidenced by a lower lactic acid concentration and a maximal work load during the last 15 minutes of the high intensity stage of the exercise protocol.”

Study 2 is perhaps the most well known of the ketogenic diet studies. The paper had five highly-trained cyclists performing a VO2 max and “Time to Exhaustion” (TEE) cycling test before and after a four-week ketogenic diet.

The TEE test showed extremely high variability between the participants. One showed a huge increase in TEE (not sure how a highly trained cyclist increases their TEE by 84 minutes in 4 weeks), another showed a 30-minute increase, two showed roughly 50-minute declines, and one showed almost no change.

As for muscle glycogen stores, muscle biopsies showed that the KD reduced muscle glycogen to almost half of normal. That alone is enough to indicate high-intensity performance might be impaired.

Consistent Findings Among These and Other Studies
1.  Improved Body Composition
Let’s take a look at what’s consistent across these two studies (and in fact, many studies on ketosis) and see what we can learn about ketogenic diets and performance.

The first consistent theme is improved body composition. But this is most likely from spontaneous caloric restriction. That’s a no-brainer.

There’s a substantial amount of data from other diets that reduce caloric restriction from any source (even those that reduce fat) that show improved body comp.

Of course, when we’re talking about improved body comp in ketogenic diets, we’re referring almost exclusively to a loss of fat mass. However, there’s no literature to support that a ketogenic diet is beneficial for promoting increases in muscle mass.

3.  Reduced Levels of Intramuscular Glycogen
The reduction in performance at high-intensity is likely a feature of the reduced levels of intramuscular glycogen seen across the studies. This may also impact recovery for hard training athletes and impair the ability for muscles to increase in size.

Ketogenic Diets Don’t Optimize Muscle Gain
Let’s get down to brass tacks. Ketogenic diets may be good for losing weight but they certainly don’t optimize muscle gain, nor do they optimize your training capacity.

Nutrition science has found that consuming both carbohydrates and protein elicit a greater anabolic response than either in isolation. On a ketogenic diet you strip out the carbs, but since both protein and carbs are needed for optimal muscle gain, ketogenic diets strip you of a missing key ingredient.