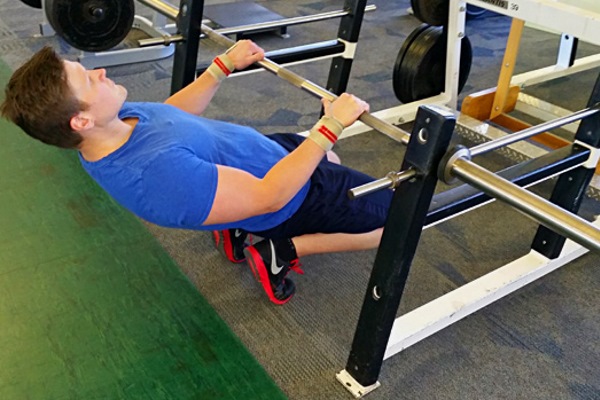 Size Increases of 300 Percent
Every once in a while, a muscle-building program pops up that features extreme stretches. The first one that made waves appeared in the 1990s, but the basic plan has been “invented” many times since then.

The idea is to hold a moderate weight in the fully stretched position of an exercise for anywhere from 30 to 60 seconds. An example would be holding a dumbbell flye in the bottom position to target the chest.

According to the developers of such programs, the stretch was intended to expand the fascia surrounding the muscle bellies, theoretically leading to hypertrophy.

As evidence, lifters were told to look at the musculature of Olympic gymnasts (who largely train and perform with static holds), along with a study conducted by Dr. Jose Antonio that subjected quail (yes, birds) to an extreme stretching protocol that involved hanging weights on their wings for 28 days.

During the month-long study, weight was progressively added. Ultimately, the birds experienced size increases of more than 300-percent in the stretched muscles. Consequently, they all started wearing tank tops, even in the winter.

For obvious reasons, bodybuilders couldn’t emulate this study to a T. There’s thankfully no documented accounts of anyone duct-taping himself to a pull-up bar for 28 straight days. Regardless, many lifters adopted the principle and used loaded static stretches for each muscle group.

This method of stretching had its critics back in the day, with some claiming it was an utter waste of time. There was little to no scientific research on humans to suggest otherwise.

Until now, that is.

Testing on Humans
Dr. Jacob Wilson and his team recently put the theory to the test in the lab, investigating the effects of weighted intra-set stretching on skeletal muscle size and strength in human subjects.

Both groups performed 4 sets of 12-rep calf raises on a leg press twice a week for 5 weeks. The first set was performed at 90% of subjects’ 1-rep max (1RM), followed by 3 sets in which the weight was decreased by 15% of subjects’ 1-RM per set.

The trainees in the stretching group let the weight from the leg press stretch their gastrocnemius (the big muscle in your upper calf) in the fully-stretched bottom position for 30 seconds between sets.

They repeated this process continuously (without rest) three times, dropping the weight after each set.

Meanwhile, the non-stretch participants held the weight stack with their feet neutral and avoided a stretch in-between sets.

The Results
Muscle thickness effectively doubled in the group that used the stretching method (+23 mm ± 5.0 vs. + 9 mm ± 4.8). Both groups increased strength, but there were no real strength differences between the two groups.

In short, the study suggested the optimal environment for results is a combination of mechanical tension and muscle damage. Tacking on some “stretching sets” near the end of your regular-volume training workouts when you’re experiencing significant cell swelling should lead to additional hypertrophy.

A Word of Caution
Loaded static stretches can be dangerous if performed incorrectly, so use moderate weights, be cautious with the degree of stretch, and only go deep enough to feel it in the targeted muscle instead of the joints or ligaments.

When you start to feel it in the wrong places, drop the weights to the floor or rack them!

Furthermore, there’s a time and place for stretching. Doing them at the beginning of a workout has been shown to have a negative impact on training performance.

As such, save the static stretching methods for later in the workout when you’ve got a pump and are finishing things off.

Stretches to Try
To emulate the Tampa study model:

Not every movement is suitable for the stretch/drop-set method, but Wilson suggested a few exercises where it should work well. Do these once or twice a week on selected body parts for 5 weeks.

Incline Seated Dumbbell Curl: Between sets, let the weight pull you into controlled hyperextension at the shoulder for at least 30 seconds. Be sure to flex your triceps at full extension to maximize stretch and tension. Drop the weight and repeat the process 2 or 3 more times.

Dumbbell Flye: Use approximately 40% of the weight of your 1-RM and drop down into the deepest flye you can on a flat bench.

Hold it in the fully-stretched position while maintaining a slight bend in your elbows. Gravity will slowly start to take hold as the set continues, but stay in it until you feel your form start to compromise.

After holding the weight for at least 30 seconds, reduce the weight and repeat the Tampa protocol 2 or 3 more times. Remember, no resting between sets.

Shrug: Following a set a shrugs, allow the weight to keep you in a static hold position at full eccentric. Don’t let the weight rest against your sides.

After holding the weight for at least 30 seconds, perform the drop set/holds described above.

Romanian Deadlift: Emphasize the bottom position with dumbbells or a barbell held at ankle or mid-shin height (depending on your biomechanics).

Extend your hips back as far as you can with your weight on your heels for maximum tension on the hamstrings. Keep the weight as close to your body as possible.

After holding the weight for at least 30 seconds, perform the drop set/holds as described above.

Squat: Between sets of a quad-focused movement, sit on the backs of your heels and place your hands on the floor behind you to support your body.

Alternately, sit back on your heels and hold onto a fixed bar, as shown in the photo. In either case, sit back as far as you can and hold the stretch.
After maintaining the stretch for at least 30 seconds, perform an additional 2 to 3 drop set/holds.

Pull-Up: After completing a set of weighted pull-ups, fully extend your arms and hang. Keep your feet off the ground for maximal tension. Repeat using lighter weight (or bodyweight) for 2 or 3 additional sets.

Rope Extension: Between sets of triceps rope extensions, let the rope pull you back into a stretched position and hold for at least 30 seconds. Reduce the resistance and repeat 2 or 3 more times without resting in-between sets.