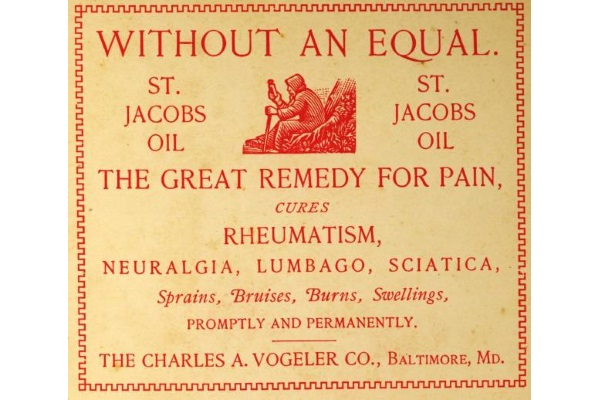 As P.T. Barnum once said, “There’s a sucker born every minute.” Nowhere is this truer than in the fitness world. Why people allow themselves to be suckered so easily is simple – working out is hard.

Changes in technology haven’t made this any better, either. If anything, technology has allowed people to be duped to a greater scale than ever before – because science, bro. But the thing about science is that if it’s correct it can be replicated. If not, there’s a pretty good chance you were swindled by a modern-day snake oil salesman.

Here’s a list of some of the more memorable fitness swindles I can remember in my thirty years of lifting weights.

Snake oil ads have gotten a facelift, but they’re still around.

Arthur Jones’ infamous Colorado Experiment is one of the most talked about training methods when the subject of high-intensity training comes up. Jones, the inventor of Nautilus training equipment, invited Casey Viator, a Mr. America winner at just nineteen, to come to his “lab” and train. The story goes that Viator, who had one of the most impressive and dense physiques ever seen in bodybuilding competition, managed to gain 63 pounds of muscle in just 28 days.

While that sounds impressive, history has revealed a couple things that were missed during the initial telling of the tale:

Casey had been sick in the lead up to the experiment, almost dying due to a bad reaction to a tetanus shot. During his time in hospital he’d lost over thirty pounds of muscle.

There has always been a question over whether any drugs were used or not. Viator and Jones have both denied it until their deaths, but Bill Starr had this to say about the whole thing, “What the public didn’t know was that Casey was taking steroids the whole time without telling Arthur and he was also sneaking out to a local YMCA to train with some real weights. I know this because Casey told me so.”

Back in 1996, Bill Phillips, then head of EAS and Muscle Media 2000, uttered these words about a new supplement called HMB. HMB, beta-hydroxy-beta-methylbutyrate, was touted as the best thing you could find short of taking Deca Durabolin (a well-known steroid) itself.

Like with all things supplement related, the marketing of HMB was geared toward young men desperate to pack on some size but too scared to find a steroid dealer. If you were around the fitness and gym scene in the ‘90s, then you know that EAS ruled the roost when it came to quality supplements that cost a fortune – and HMB was their new hit.

“[T]he thing about science is that if it’s correct it can be replicated. If not, there’s a pretty good chance you were swindled by a modern-day snake oil salesman.”

But it didn’t work. Like most supplements, the results were blown up and exaggerated. As Anthony Roberts pointed out in this article here, the results in trustworthy experiments were hardly anything earth shattering or conclusive unless the users were elderly or untrained.

Supplement hucksterism may be the worst offender in the fitness industry. The bottom line is that if a supplement sounds too good to be true, then it probably is.

Side note: There are also anecdotal reports of various companies “spiking” newly released products with either significantly higher doses of the active compounds to make them more effective or even putting anabolics in them. This gets the product an instant following and guarantees future sales even though people won’t see much, if any, results once the spiked substances have been removed.

Supplement hucksterism may be the worst offender in the fitness industry.

Sometimes a perfect storm just comes about. Cybergenics was the guys who first started using before-and-after pictures to great effect to sell shitty supplements. Essentially, Cybergenics was a bunch of bottles of stuff that they called a “steroid replacement system,” a diet, and a training plan.

“These days intermittent fasting isn’t a big deal, but back then asking someone to not eat for twelve hours was akin to drawing satanic symbols and cutting the heads off goats.”

I’ll start with the easy bit – the training plan. It was brutal. Brutal in a way that few people can maintain for even a week let alone a month. It consisted of pre-exhaustion exercises done to failure before a compound movement. The really fun part was that the isolated pre-exhaustion movement was a triple drop set to eccentric failure. For the uninitiated, that means you perform the set until you can’t do anymore. Then your partner helps you lift the weights until you can no longer lower them under control anymore. Then you decrease the weights and repeat the process two more times. Then you hit the compound exercise. Now do that for a few body parts daily and you’ll quickly learn what real muscle soreness is.

The diet wasn’t anything special except it limited the amount of carbohydrates you could eat and called for fasted cardio sessions. These days intermittent fasting isn’t a big deal, but back then asking someone to not eat for twelve hours was akin to drawing satanic symbols and cutting the heads off goats.

And then, the final component – the bottles of “steroid replacements.” $140 worth. The equivalent of spending $500 today. (T-Nation’s American Sniper workout anyone?) While it all seemed incredulous, Cybergenics had these before-and-after pictures as proof and people threw money at them left and right. Yet, no one ever seemed to match the results shown by the models. Funny that.

The Internet has allowed this strange phenomenon to prosper. For some reason, in the fitness world it is more profitable to teach trainers something than it is to actually train people. So you end up with a slew of former trainers, usually with less than a decade of experience (i.e. not very much), standing on their soapboxes telling people who are actually training clients how to do their job better.

“Reality check: if your mentor is no longer actively training people, then get rid of him or her. Helio Gracie was on the mats right up until his death, so age has nothing to do with it.”

The fact is that the world has changed enormously since I began training, and the population has, in turn, become more enormous. Back when I first started I can’t recall a single client who couldn’t do a push up or squat well. These days it is unusual for a new client to come in who can touch his or her toes, squat, or even do a solid plank.

But the Internet gurus sit in their ivory towers dispensing advice about how you should train your clients, despite not having trained anyone themselves for at least a few years. What they see are trainers coming to them to learn and they base what the general population needs off the fitness workers in front of them. That’s like trying to teach your two-year-old to run like Usain Bolt. People need to walk before they can run but the gurus are so disconnected they can’t see this.

Reality check: if your mentor is no longer actively training people, then get rid of him or her. Helio Gracie was on the mats right up until his death, so age has nothing to do with it.

Back in the early days of kettlebell marketing, all sorts of wild and exaggerated claims were made. Then, people with a limited background in training started using kettlebells and found they had some carryover from their kettlebell training to other tasks.

“People have lost sight of the program minimum being a minimalistic plan to be used for a short period as either a break-in plan or during times of high stress when you don’t have much time to train.”

You’re kidding, right? Your strength and conditioning training made you better at other things, too? Amazing. It’s called GPP, or general physical preparation, and that is the entire point of engaging in a strength and conditioning plan. It’s also part of the general adaptation syndrome, first talked about by Dr. Hans Selye, and is the body’s reaction to repeated stress.

These days it’s not uncommon to hear people talk about how kettlebell swings and snatches are the best form of cardiovascular training available. I’m not saying they’re not good training and I clearly am a big believer in them, but when it comes to developing real cardiovascular horsepower nothing can replace running, rowing, cross country skiing, and cycling – as my friend Kenneth Jay points out in the picture below.

The same has happened with what used to be called “the program minimum” – swings and get ups. For some reason, these two have come to be hailed as the cure to all that ails you physically. While they’re certainly a great pair of exercises, there are still missing elements, such as the lack of any bent-arm strength work either in pressing or pulling and the lack of a squat pattern. People have lost sight of the program minimum being a minimalistic plan to be used for a short period as either a break-in plan or during times of high stress when you don’t have much time to train.

Are kettlebells a good tool for the majority of the population? Yes, absolutely. Do they cure cancer and can they replace rowing or running for real cardiovascular improvement? No. Pick the right tool for the job or the only WTH effect you’ll be pondering is how come you just failed your PT run test when you’ve been doing so many swings.

Like with anything, caveat emptor because the fitness industry will fleece of you of your money faster than a Ronda Rousey fight.

What do you think is the biggest fitness hoax? Post to the comments below.