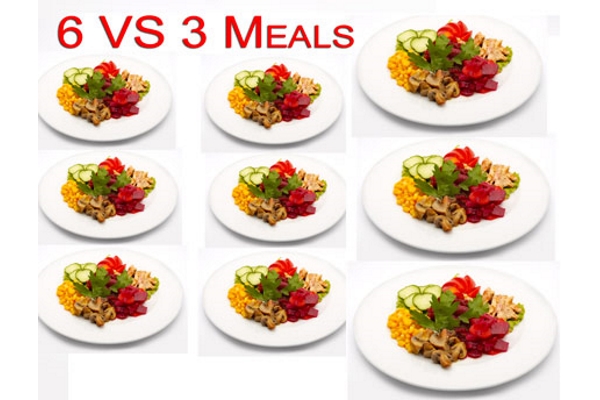 Which is Better for Fat Loss?

Meal frequency has been the big debate among prep coaches and all the diet gurus. a hot topic in for many years, especially when dieting. If you ask any personal trainer or anyone that competes, they advocate 5 – 6 meals per day for weight loss in order to keep metabolic rate high. Other reasons for recommending small, frequent meals is to keep small, consistent consumption of protein as opposed to three large doses over the day, and finally, small frequent meals may be better for appetite control, all of which is conducive for fat loss.

The other side of the equation for the ‘keep the metabolic fire stoked’ implies that the metabolic rate can become depressed during periods of ‘not eating’. Large-scale survey research does tend to show a correlation between eating frequency and obesity, with the ‘nibbling’ approach inversely correlated with BMI (fat people seem to eat less often, thin people tend to eat more frequently). These studies do not look at muscle mass per se, but at BMI; there does seem to be a trend that more meals per day increase body weight and BMI. There is limited counter-evidence, and is confounded with high activity levels. Studies investigating meal frequencies have so far provided conflicting reports, but a recent meta-analysis of all the studies suggest some shocking results.

Effects of meal frequency on weight loss and body composition: a meta-analysis, by Schoenfeld, Aragon & Krieger, in Nutrition Reviews (2015)

Robbie Durand has been in the sports supplement and bodybuilding industry for 15 years. He has contributed to many national magazines and web sites. He has an M.A. in exercise physiology from Southeastern University and a B.A. in Dietetics from Louisiana State University.