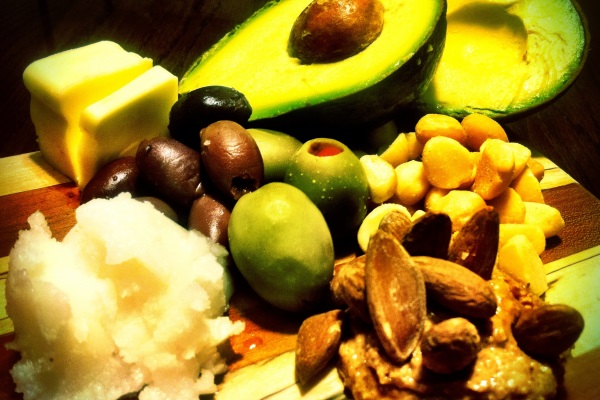 As one of the three basic macronutrients, fats play a vital role in the growth and development of the human body. There are essential for proper functioning and are involved in myriad physiological processes ranging from the formation of cell membranes, nerve transmission, the absorption of vitamins, hormone production, protection of vital organs, the insulation and regulation of body temperature, and of course, they are a readily available and easily utilized source of energy.

While dietary fat in general is capable of performing most of these functions, fats have a much broader range of effects in the body, many of which are unique to the type of fat consumed. To this end, all fats are not created equal. There are four basic categories of fat: saturated, monounsaturated, polyunsaturated, and trans-fat. For decades, saturated fat was unjustly labeled as one of the bad guys; accused of being a main player in the development of heart disease, while monounsaturated and polyunsaturated fats were considered to be healthy. Even the man-made trans-fats were long considered to be a heart-healthy alternative to saturated fats due to their unsaturated nature. While trans-fats do occur naturally in small quantities and can have important health benefits, we cannot say the same for man-made trans-fats (ex. margarine), which have since been recognized as damaging to our health.

With the exception of man-made trans-fat, we now know better than to label fats as good or bad based on these categorizations. The truth is that all of them can and should be part of one’s diet when maximum health is desired. However, corporate greed has resulted in the denaturation, nutritional depletion, and pollution of nearly all our fat sources, turning many of them from nutritional powerhouses into health-destroying poisons.

You see, many fats/oils in their natural state are less stable than their processed/refined alternatives, making them more susceptible to heat and allowing them to turn rancid more quickly. They also tend to possess a stronger flavor and brighter hue. From the perspective of the food industry, this limits potential applications and reduces shelf-life, lowering overall profits. Unfortunately, when determining which fats are good for them and which one’s aren’t, the average consumer doesn’t look any farther than the fat’s original source, leaving them vulnerable to the corporate chicanery of profit-driven operations.

Many of todays most commonly used fats, such as canola oil, cottonseed oil, soybean oil, corn oil, sunflower oil, and safflower oil, peanut oil, palm kernel oil, etc, are some of the very worst fats in existence. Yet, these same fats are frequently touted as the healthiest options by certain health authorities. Often, their unsaturated nature is pointed at as proof of their superiority, while uneducated consumers buy this shit right up.

Most unrefined (i.e. raw/virgin) plant-based fats that are edible in their natural form (ex. Sunflower seeds) provide significant health benefits and need not be eliminated from the diet. However, the oils derived from these plants, once they make their way to the store shelf, have been severely processed, eliminating the health benefits they once possessed, while also containing toxic byproducts as a result of the refining process. Some of the oils we see at the store were never even edible in their natural form. In fact, some of these oils don’t even exist in nature.

For example, canola oil; a term which was derived from the words “Canada” and “oil”, is a genetically modified version of the rapeseed plant. The oil within the rapeseed is actually toxic to human beings, due to a substance called erucic acid, which was show to cause heart damage in animals. This is why rapeseed oil is never used as a food source, but only for industrial purposes. Still, canola has been widely promoted by the food industry as being one of the most heart-healthy cooking oils available—a disgusting, outright lie which is currently damaging the health of countless millions worldwide.

Almost every store-bought cooking oil, unless it specifically says raw/virgin/non-refined on the label (most manufacturers who sell these oils make sure to mention this in big, bold letters in order to distinguish their products from the processed alternatives), has almost certainly been processed to death—literally. Most store-bought cooking oils are exposed to a crazy amount of processing involving chemical solvents, neutralizers, steamers, bleach, de-waxers, and deodorizers before they are finally packaged.

Often, the primary solvent used to extract these oils is hexane—a potent neurotoxin and carcinogenic agent produced as a by-product of gasoline production, and in case you were wondering, yes, toxic hexane residues do remain in the oil. Disturbingly, they aren’t tested for by the FDA, which means you won’t find them on the label. Furthermore, the omega-3’s in these oils, when exposed to high-heat processing, undergo a transformation in which they are changed into trans-fats, but once again, the FDA does not require these trans-fats to be listed on the label. So much for a “heart-healthy” fat.

At this point, after having become aware of the above, does it even matter if I tell you that the ratio of omega-3 to omega-6 fatty acids is seriously out of balance, causing systemic inflammation and increasing the risk of developing virtually all degenerative diseases?

If this didn’t scare you into being more discriminatory regarding the kind of fats you include in your diet, whether intentionally added or as part of pre-made foods, I doubt much else will. While I am not going to delve into all the ill health effects these processed oils can and do regularly cause, there is an abundance of easily sourced information on the subject, for those of you who understand the seriousness of the situation and desire to educate yourselves further.

But what about fats that come from animals, such as butter, or minimally processed foods that are fat-based, such as peanut butter? When it comes to animal fats, you have to look at 3 main factors when determining their suitability as a food source. 1.) Has the animal been fed a natural diet? 2.) Was the animal subjected to treatment with growth promoting drugs and/or antibiotics? 3.) Was the animal’s food organic, or was it exposed to pesticides and herbicides? While we could go even deeper and talk about the issue of animal “type” as it relates to our health, it is somewhat outside the scope of this article and will not be addressed.

We have all heard the saying “you are what you eat”. While this is true, in some cases we can more accurately state “you are what your animals eat”. Much of what we consume, whether good or bad, is absorbed into the body and stored within our muscle and fat tissue. It is no different with animals. However, when we eat these animals, everything that was stored within their tissues is then delivered into our own bodies, having either a positive or negative effect on our health. Whether this fat comes from the animal’s flesh or its milk (ex. butter) makes no difference.

One thing we need to understand when evaluating an animal’s diet is that many foods which would be considered healthy for human beings are not healthy for animals, so we cannot judge an animal’s diet according to human standards. Otherwise, we may come to false conclusions. For example, most cows today are fed corn or a combination or corn and soy. These foods, while a natural food source for humans, are never consumed by cows in the wild. Cows are as likely to munch on corn and soy as we are to eat a handful of grass, but when this is the only thing they are given, they don’t have much choice.

When cows are fed a grain-base diet such as this, it drastically changes the nutritional profile of the milk they produce and therefore, the butter/fat which comes from it. While corn-fed butter is still greatly preferable to the heavily processed vegetable oils mentioned above, it is still far inferior to butter that comes from cows which have been fed their natural diet—grass.

When assessing semi-processed fat-based food such as peanut butter, one needs to be careful to look at the labels. While peanut butter is mostly just mashed up raw peanuts, which leaves their nutritional value intact, many manufactures add trans-fats to them, as they believe it increase the overall palatability of the finished product. Obviously, this devalues the product, but the majority of consumers aren’t even aware of their inclusion. This problem is easily solved by purchasing “all-natural” peanut butter, which, although usually having a slightly different texture, is nearly indistinguishable in terms of taste, while being devoid of unwanted trans-fats. Most grocery stores will carry at least a couple of these all-natural versions. When it comes to fat-based whole foods such as peanut butter, all you really need to do in order to see if anything undesirable was added is read the label.

In Part 2 of this article I will discuss some great alternatives to these health damaging oils, all of which are loaded with nutrition and have significant, positive effects on our health.