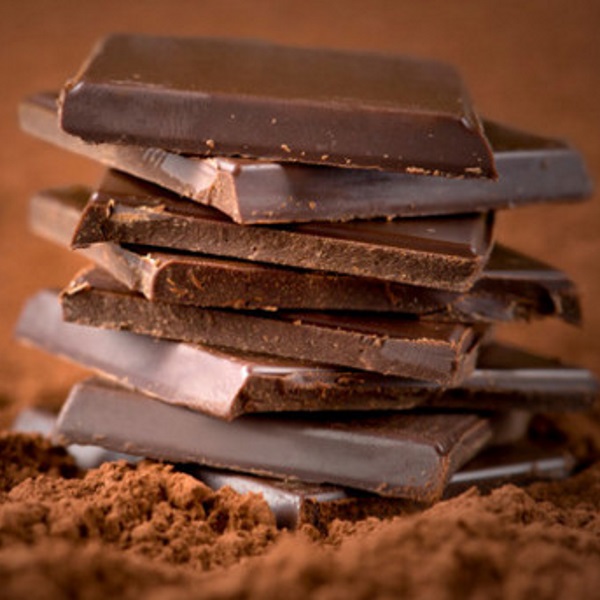 Runners, cyclists and other athletes improve their performance capacity when they eat 40 g dark chocolate every day for two weeks. Researchers at Kingston University in England discovered this when they did an experiment with a handful of students. Adding a small piece of dark chocolate to their diet improved their endurance capacity.

Study
The researchers gave 9 male students who were reasonably fit 40 g chocolate for a two-week period on two separate occasions. On one occasion the chocolate was white, on the other it was plain. The plain chocolate they used was a Mars product – Dove’s Dark Chocolate, to be precise. This product contains relatively high amounts of (-)-epicatechin, the most important bioactive ingredient in cacao.

The students ate the chocolate instead of their usual dessert, to that their daily energy intake remained constant.

Before and after both supplementation periods the researchers got the students to cycle on an ergometer. They asked the students to first cycle for 20 minutes at moderate intensity, and then finally to sprint at maximal capacity for a few minutes.

Results
The supplementation with dark chocolate extended the amount of time that the subjects were able to sprint during the exertion test.

The researchers found no statistically significant effects of supplementation on maximal oxygen uptake, heart rate, lactic acid concentration in the blood or blood pressure. They did discover, however, that giving the students dark chocolate raised the gas exchange threshold [another term for this is ventilatory threshold].

The gas exchange threshold is the point at which during exercise the body no longer takes enough oxygen in through normal breathing. In other words: at a certain level of intensity you start to pant. Supplementation with dark chocolate apparently results in the body being more economical with oxygen during moderately intense exercise, and that athletes only start panting to get enough oxygen at a higher level of intensity.

Mechanism
The researchers suspect that dark chocolate improves performance by boosting the blood concentration of nitrogen monoxide or NO. “Dark chocolate, unique to other dietary nitrate supplements is hypothesised to mediate NO production through endothelium-dependent effects; related to flavanols’ ability to supress vascular arginase enzyme activity, thus increasing the production of NO”, they wrote.