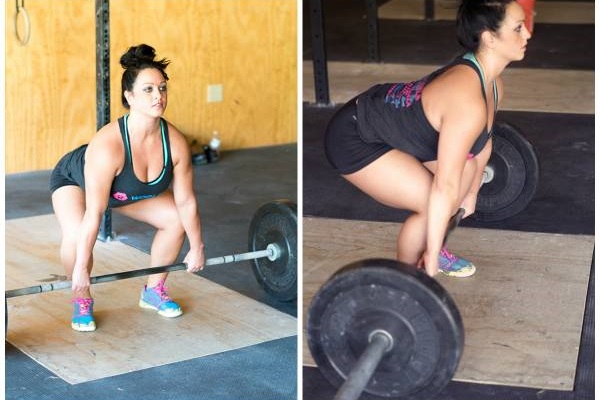 There has been much back-and-forth debate on whether the setup for deadlift and clean are different. The truth is, they are.

Small changes in foot and shoulder position (pictured above during the setup for the clean) make a big difference.

The deadlift involves moving heavy weight from the ground until the hips and knees are extended. The height of the bar at the top of the lift will vary depending on arm and leg length, as well as placement of the feet.

A sumo position shortens the distance of the lift by moving the feet out wider. In this article, we will not discuss the sumo deadlift. Rather, we will discuss the conventional deadlift, where the feet are placed almost directly below the hips. The deadlift is not usually considered an explosive lift, relative to the clean. Although seeing Benni Magnusson below, we might argue about the explosiveness of the deadlift.

Therefore, at the hips, the clean looks different from the deadlift. The lifter has more knee bend due to a need to be in the power position. Danny Carmago, a well-respected Olympic lifting competitor and coach, narrates the clean in the video below.

As each of these lifts are brought to the hips differently, it is likely there are some incongruencies in setup. Let’s walk through these:

Training cleans and deadlifts at the same time can be difficult. For athletes wanting to train both lifts, I recommend dedicating a good amount of time to each lift exclusively before working on the other. For example, you could spend eight to ten weeks working on Olympic lifts and then switch to a cycle of deadlifts.

It is difficult for most beginners to master the nuances of performing both these lifts, and moving from one to the next can make it even more difficult. Both of these movements are excellent for developing hip power and strength, so take the time to perfect the setup and learn the technicalities of each movement.