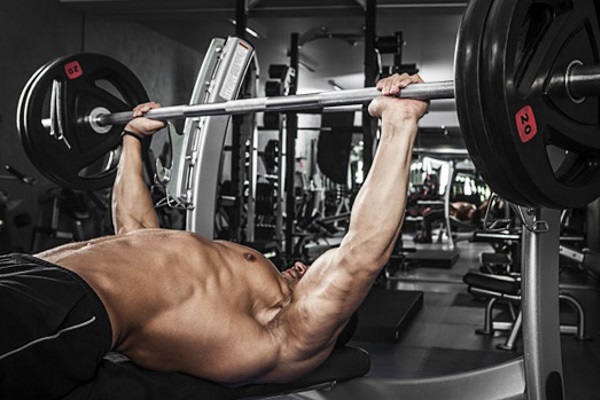 Supercharge Your Pecs
Want your pecs to reach superhero status? Then find the exercises that give you the best return on your investment.

Despite what many lifters believe, the basic lifts will do the trick. But you’ll need to supercharge them with a few tweaks to get a strong, dense chest.

Pec Muscles
Although the goal is to build a thick slab of muscle across your chest, the pectoralis major really is made up of at least two parts: the clavicular and sternocostal heads.

In most cases they work together, but each head has slightly different anatomy and functions. To develop the whole chest, it’s smart to train the functions of each head.

The Upper Chest
The clavicular head is also known as the “upper chest.” The muscle is anchored to the part of the collarbone nearest the sternum, runs across the chest, and attaches on the upper arm.

You might notice in some (very shredded) people that the clavicular head is separated by a groove from the sternocostal head and sometimes the deltoid too, making it look like a separate muscle.

An underdeveloped clavicular head can be the difference between the chest looking full or looking like a pair of sagging man-boobs.

As such, those powerlifting-style bench presses done with the elbows tucked are likely still involving the pec muscle to a large extent, but probably with a big focus on the clavicular head.

It’s referred to as both the middle and lower chest because the muscle is made up of six to seven different individual segments that overlap each other in a fan-shaped arrangement. It’s much bigger in size than the clavicular head and makes up approximately 75% of the pec major.

Because of how the sternocostal head attaches, it’s the primary horizontal flexor. However, it’s involved in more than just horizontal flexion; it performs shoulder adduction when the arm is below the horizontal. Think of a lateral raise, but exerting force in the opposite direction.

What Do the Pecs Actually Do?
The pecs, or more properly the pectoralis major, link the sternum (the bone in the middle of your ribcage) and the clavicle (your collarbone) with the humerus (your upper arm).

Although the pec major is classified as a chest muscle, it actually functions to move the shoulder. Assuming you’ve used the pec deck machine or done some dumbbell flyes at least once in your life, you’ll already have a pretty good idea that the pec major is very active in shoulder horizontal flexion, or even hugging.

When performing a bodybuilding-style bench press or push-up with your shoulders at right angles to your upper body (or close to it), you’re basically using horizontal flexion of the shoulder but adding elbow extension at the same time.

What Type of Muscle is the Pec Major?
There’s not a lot of data to go on when it comes to pectoralis major fiber type. What little info there is indicates a greater proportion of type II (fast-twitch) muscle fibers. One study reported 65% type II and another reported 58% type II.

This might be partly why old-school routines, built around first moving heavy weights and low reps, produce better results in terms of chest development than pump-focused programs.

Can’t Beat the Bench Press!
When it comes to putting the chest to work, research shows that you really can’t beat the bench press.

Performing the bench press with loads greater than 80% of your 1 RM results in almost every muscle fiber of both the clavicular and sternocostal heads contracting as hard as possible (>90%), not to mention that muscle activity tends to increase from the start to the end of a set.

While the traditional bench press does a good job of building the chest, there are a few tweaks you can use to squeeze every last drop out of the movement:

Preserve the Push-Up!
Research has found that using elastic band resistance in push-ups can produce similar levels of muscle activity as in bench presses, and even produce similar gains in strength over long-term trials.

Simply grab opposite ends of the band with both hands and stretch it behind your back before getting into a push-up position.

Since exercise variety is almost always a good thing for maximizing gains in muscular size, incorporating both bench press and push-up variations into your programs is a win-win scenario.

Although the push-up is a great exercise for the pecs (however you perform it), research has found that performing your push-ups with your hands touching is much more effective than doing them with a wider grip.

This might be because they’re simply more challenging when done that way, so be prepared for some surprisingly tough moments, especially if you load up on the elastic band resistance.

Don’t Bench on a Ball!
Research has shown that benching on a stability ball involves lower muscle activity in the pectoralis major than bench presses on a stable bench, probably because they require you to use lower loads.