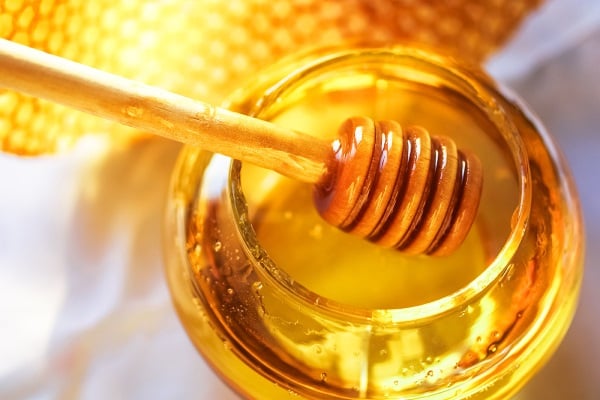 From Ergo Log
It doesn’t really make an awful lot of difference which easily absorbable carbohydrates strength athletes use for their protein shakes. According to a 2007 American study, all types of fast carbs have pretty much the same effect on insulin, glucose, testosterone and cortisol levels. But if you have to choose one that works best, then it would be honey.

Study
If you are one of those people who hardly every puts on weight and can therefore afford to put carbohydrates in their protein shake, then you may be interested in an article that Richard Kreider published in 2007 in the Journal of the International Society of Sports Nutrition. In his study Kreider got 40 well trained strength athletes to do a full body workout after which they drank a shake containing whey.

The shake contained 40 g whey and 120 g of an easily digested carbohydrate: sucrose [ordinary sugar], maltodextrin or honey. The honey that the researchers used consisted of 31 percent glucose, 25 percent wheat starch, 13 percent insoluble fibre and 5 percent of maltose. The researchers also gave the subjects no shake at all on one occasion.

Results
For a period of two hours after the workout and consuming the shake the researchers monitored the subjects’ blood. They observed no statistically significant effects on the testosterone and cortisol levels.
The effect on the insulin level is shown below: all three carbohydrates have virtually the same effect.

Conclusion
“Although ingesting honey as the source of carbohydrate with protein tended to maintain blood glucose levels to a greater degree, no significant differences were observed among the types of carbohydrate ingested in terms of insulin response to supplementation”, the researchers wrote.

“These findings suggest that each of these types of carbohydrate can serve as effective sources of carbohydrate to ingest with protein following intense resistance exercise in an attempt to optimize carbohydrate availability as well as post-exercise anabolism.”

The study was financed by the National Honey Board.