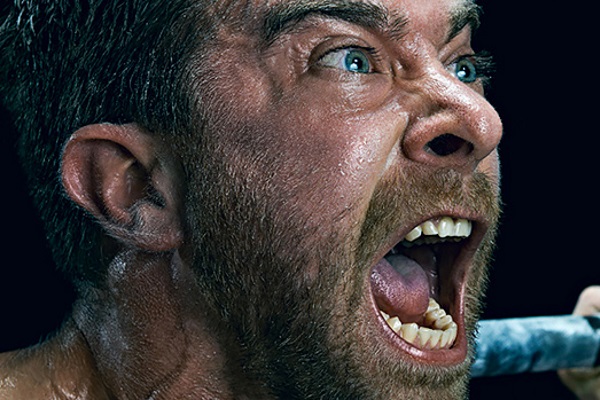 This Is Gonna Hurt, But You’re Gonna Grow

Increasing metabolic stress to induce hypertrophy is one of the most overlooked aspects of training. Everyone knows how to train heavy, but few people tap into their true growth potential by using intensity techniques to magnify metabolic stress. Why? Because they hurt. Badly. If you’ve got the balls, here are the techniques to use.

1 – Intra-Set Stretching
Do a long set to total failure, then let the weight stretch that pumped muscle for 30 seconds as you try not to cry.

The use of intra-set stretching is not only one of the best methods of enhancing mobility under loading, but also devastatingly effective when it comes to muscular hypertrophy secondary to metabolic stress. Intra-set stretching techniques are simple to program and execute.

After doing a set to failure in an ultra-high rep range, you’re simply going to let the load stretch you out passively for around 30 seconds, or as long as you can tolerate the searing pain. Aggressively stretching a fully-pumped muscle is the perfect mechanism for growth as you increase overall muscular tension in the movement while also maximizing the cell swelling response for maximal muscle damage.

The key here is to take your set to absolute mechanical failure – meaning you can’t complete another rep even with maximal effort – before you let the weight stretch you out. When it’s time to hold that stretch, you better be ready for some mental warfare.

Be careful not to compensate your joint positioning during the stretch phase and put your body at an increased risk of injury. You’re going to be in some pain here, but don’t deviate your position, especially under loading. Clean form and good technique is a requisite.

2 – Old-School Drop Sets
Take an exercise to failure, then reduce the weight and do another set without resting. Perform one to three drops. Stop just before your eyeballs pop out.

If you’ve been lifting more than a month, you’ve probably been introduced to the most popular intensity method in training – the drop set. You simply take a loaded movement to failure until no more reps can be completed and then the weight is lowered so reps can continue.

Here’s a video of a leg extension drop set where full range-of-motion reps are taken to failure for three drops. Note that as soon as tempo and rhythm of contraction are lost, the weight is dropped.

Though the programming of drop sets is quite basic, this intensity technique can yield some unbelievable hypertrophy and strength benefits. Remember, more is not always better when it comes to intensity techniques. The key to successful implementation is to first know when to create an immense amount of muscular damage that your body can safely handle, and secondly, know when to back it off and allow time to recover. Traditional drop sets are best done when you’re relatively fresh.

3 – Partial Reps
Do an exercise using the full range of motion, then shorten the range of motion as you start to fail and continue the movement until you begin to hallucinate.

The term “partial reps” gets a bad rap in the strength community because it’s become synonymous with the average ego-driven gym bro stacking on far too many plates and lowering three inches before high-fiving his fellow poser to celebrate his spurious new PR. Let’s get this straight, the perfect execution of partial reps on top of a maximal effort set is not the same as clowns who can’t get full range of motion on the bench or in the squat rack.

Partial reps, when programmed intelligently and executed pristinely, are an intensity technique that allows a lifter to take a set beyond mechanical muscular failure while continuing to generate force against a constant load. Check out the video where a traditional drop is combined with partial reps on the last drop for one hell of a set. Fast forward to 1:10 to see the partials ensue.

For taking sets to absolute mechanical failure and creating metabolic stress, we’ll focus in on partial reps out of the stretched muscular position. After it’s been determined that you’ll be extending a set with partials out of the stretched position, it’s pivotal that you achieve absolute muscular failure to create maximal growth stimulus. Get ready to battle against the weights and the limits of your willpower.

Starting off with a load that you can move with perfect range of motion and rhythm for around 10-15 reps, crush through your set just as you would the average hypertrophy-based scheme. As you continue to complete reps, there’ll come a point where your range of motion starts to decrease little by little. Good. This is exactly what we want. As the range of motion decreases, the rhythm and tempo of the movement should stay consistent, and the execution out of the bottom stretched position should also be remain constant. As the reps continue, you’ll lose more and more range of motion until you’re literally left moving the load just a few inches out of that stretched position. When you can no longer move the load, the set’s over.

4 – Extended Set Isometrics
Take a set to failure, then hold the mid-range position of that exercise isometrically. This can be combined with traditional drop sets if you truly hate yourself.

Driving blood (and nutrients) into a muscle or region at an increased rate is a great hypertrophy mechanism because it creates metabolic distress. Techniques such as Blood Flow Restriction (BFR) training that limit the amount of blood that leaves a muscle can also elicit a powerful metabolic response, triggering growth factors and metabolites to build up in that specific region. But there’s a way to combine these two methods for the nastiest pump you’ve ever experienced. Check out this split-squat drop set where isometric holds are tacked on to the tail-end of every single drop.

Combine extended set isometrics with maximally loaded hypertrophy set and rep schemes. By taking a movement to absolute mechanical failure and then tacking on a mid-range isometric hold of that movement at the tail-end of the set, you’ll come as close to tapping into a neural inhibitory mechanism as you’re likely to experience in weight training.

Going balls to the wall on a set and then adding an iso-hold directly after acts as a siphoning mechanism in the tissues, trapping blood locally for as long as the contraction is held. This is a powerful technique that’s safe due to the addition of an isometric contraction. The less dynamic a movement, the more controllable the stability requirements are, thus the safer the overall scheme as a whole. Yielding powerful growth stimuli with extended set isometrics fits that bill, and is a great basic intensity technique for beginners to advanced athletes.

It’s important to recognize the difference between compound sets and supersets. A superset is a combination of two exercises completed back to back with minimal rest in opposing muscle groups, like placing the bench press and the pull-up in an exercise block.

Compound and giant sets are powerful mechanisms of hypertrophy due to being notoriously brutal examples of metabolic stress. By varying the exercises that are all focused on a single muscle group, the reps and tissue response really adds up quickly, creating a massive pump and novel form of growth different than the traditional drop set or partial rep schemes.

The mechanism of muscular damage is simple. More reps under heavier relative loading equals increased local blood flow to active tissues. What makes the compound set more novel is the ability to manipulate the types of resistance and loading between exercises in the same muscle group or pattern. For instance, combining a maximally loaded compound movement like a taken-to-failure leg press and combining it with a more isolated movement that involves an aspect of the first compound lift, like leg extensions, can create a unique stress to the tissues.

To take it to the next level, incorporating accommodating resistance with bands or chains into the compound set, or even adding bodyweight movements at the tail-end, can really enhance the metabolic stress.