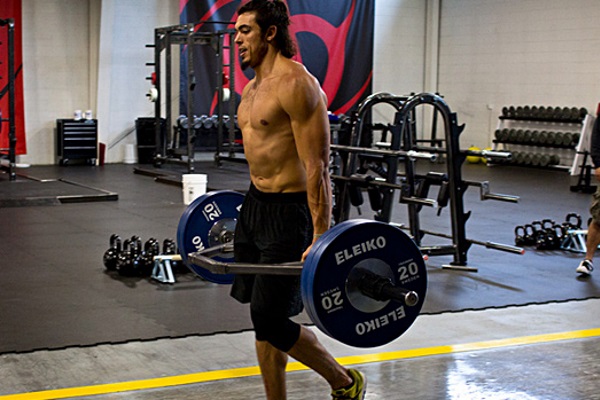 The Standards
In order to make this list, an exercise had to fit three criteria.

First, the exercise had to be one conceivably done thousands of years ago. While Socrates taught physical culture and that “no man has the right to be an amateur in the matter of physical training,” they likely didn’t have access to heart rate monitors, pec decks, or adjustable barbells.

Second, the exercise has to be one where multiple cultures around the world, independent of each other and throughout generations, have been found to do the same exercise.

Third, it has to be a movement where, if a room full of strength coaches were shown it, at least 50% of them would say it was good, less than 20% would say it causes crippling injury, 15% would say only wussies did those, and at least 10% would actually be able to do it themselves.

Here are five movements that fit those criteria.

1. Loaded Carries
Carry two large buckets full of crushed stone up a hill and tell me you didn’t get a massive workout. Now do it for the next 8 hours. Your rest period is the time it takes to walk back down the hill and get the next two buckets full of stone.

Do this for a couple of months without a break and you’ll have a new understanding of exercise. If you ever want to get in serious shape and make a few bucks along the way, become a bricklayer’s or mason’s assistant.

Loaded carries are an exercise that can be used to train the entire body, including grip strength, shoulder stability, core strength, resisted breathing, balance and gait, and conditioning, of course.

Loaded carries can involve any implement, but the more awkward the better. While dumbbells and barbells are definitely easier to work with in a gym setting, things like sandbags, buckets of water, sand and rocks, or even another person can up the ante.

Furthermore, if the loading isn’t uniform, meaning one side is heavier than the other or the weight is constantly shifting around, you can take your carry game to the next level.

To do these, use a weight that’s considered relatively heavy by most mortal men, stand tall like a proud warrior, and walk until you can’t feel anything anymore. The next time, add weight and try to beat your distance.

2. Punching
In military service, hand-to-hand combat was a staple, and given the popularity of sports like boxing and MMA today, it’s a worthy addition to the list. There’s something visceral about throwing a punch, and even more visceral about connecting.

While not everyone may want to step into the ring or octagon, they can still train with punching movements using heavy bags or speed bags, or even through vigorous shadow boxing. Train like you intend to have to fight for your life.

As the old Spartan saying goes, “Come back with your shield or on it.”

A fighter would likely tell you that a great punch originates in the legs and hips. However, many great coaches will take it one step further and tell you that punch strength comes from the glutes.

Get your punching-side leg ground solidly into the floor so you can generate force through knee extension and hip external rotation and extension. This can make the difference between throwing a punch that just annoys a 12 year old and a knockout punch that can win the championship.

If you have a heavy bag, work on getting strong connections with your wrist locked in neutral and your knuckles flush to the bag. Take one punch at a time and work on getting the drive to come from the hips and legs, finishing with the arms.

If you have a speed bag, work on connecting with the bag and maintaining a solid tempo without failing too badly. This is skill based, so don’t sweat it too much if you don’t have the eye-hand coordination down yet.

If you have nothing to punch, shadow boxing is an option. Throw punches as if you were trying to connect with an invisible object. Try to extend your arm and pull back with speed and control.

If you don’t want to punch anything, just do as many pushups as possible. By yourself. In your basement. With the lights off.

3. Rope Climbing and Pulling
It’s tough to build pulling strength unless you’re actually pulling. It’s one of the great self-regulating activities. Either you climb the rope or you don’t. Either you pull the rope towards you and whatever else it’s attached to or you don’t.

Rope climbing is a fantastic upper body exercise that involves a lot of core strength and leg involvement. Of course, some people can climb without using their legs, and I hate them for that.
There’s a ton of grip strength, shoulder strength, back strength, and core strength involved. There’s also a lot of technique involved in rope climbing, which means you’re likely going to have to start slow and build up.

Start with either a sliding rope pulldown, a hanging pull-up on a stationary rope, or just doing chin-ups with mixed grips.

Rope pulling can produce a lot of similar benefits, with the added fun of being rooted into the ground and producing power through the legs and core.

Remember the good old days of tug of war in PE where you’d put the big kid at the back as an anchor, and then everyone would wind up pulling, sliding, falling over, and looking stupid?

The guys on the winning team won because they stayed on their feet and kept pulling while the losers lost their footing and wound up in the mud.

Successful rope pulling is as much about balance as anything related to strength.

Instead of standing upright, you’ll have to lean back in the direction you’re pulling. Your hips will have to be about 18-24 inches behind your feet, and the lower you can get your butt to the floor the better, especially if it’s a heavier load.

When pulling, use a hand over hand approach with a short range of motion to try to keep the movement coming from the upper body. If you want to use a longer ROM, you’d do best by setting your hands and turning it into a hip and leg driven movement, kind of like a horizontal deadlift.

Sleds are amazing tools for rope pulls, as they can easily be loaded up. Use a length of rope as long as possible. Get aggressive with the pulls and work on speed. If the loading is massive, unleash hell on the entire world attached to that rope.

4. Lift From the Floor to Overhead
This is one that has classically been used as a showpiece for feats of strength.

Long before The Mountain dominated Icelandic log walks and the Red Viper’s skull, guys like George Hackenschmidt, Louie Cyr, and Eugene Sandow popularized the art of strength by lifting very large and awkward weights over their heads.

Ancient Greek soldiers would do similar things with large rocks. Versions of kettlebells were used by ancient Shaolin warriors (called Shi-Suo Gong, the art of the stone padlock) many millennia before Russians adopted them.

At the turn of the 19th century, Thomas Inch would routinely press the dumbbell bearing his name, a 2.38inch diameter-handled 172-pound monster of a weight, with one hand. And who can forget Ultimate Warrior pressing Hulk Hogan at Wrestlemania VI?

Depending on the load lifted and whether using one hand or two, the movement will usually begin with a modified deadlift. If it’s possible to clean the weight to your shoulders in one go, do it. However, in the case of something like an atlas stone lift or continental lift, you may have to lock onto the weight with your chest and roll it up your thighs.

From there, the press can be either a strict press or jerk press, depending on whether leg drive is available or not. Some competition lifts indicate no leg movement, such as the classic Olympic press that was included in competitions until 1972.

But when the load becomes significant enough, leg drive will become necessary.

Any object could conceivably be used for ground to overhead lifts, but again the more awkward the better. Heavy sandbags, large rocks, loaded or half-full kegs, or for the more commercially driven, a tough kettlebell or two will do.

Rocking out a clean & jerk or atlas stone lift are also strong variations of this movement.

5. Heavy Standing Push
A heavy standing push is one of those fundamental movements used to get stuff from one place to another when it was heavier or bulkier than what could be carried.

Today’s common gym version consists of a sled push, but if you don’t have a sled you could arrange to push a car around a parking lot as long as a buddy was steering and the car was in neutral.

Heavy Ass Sled Pushes (HASP) are a staple of a lot of elite coaching programs in various sports and activities, and for good reason. The concentric-only resisted phase of the movement is easier on the joints than loaded eccentric movements.

The reciprocal unilateral movement is also very replicative of most sporting activities, and the total body tension under resisted breathing is awesome for developing cardiovascular sustainability and work output under duress. Plus they’re badass as hell.

The walking push mechanics are quite simple. You could take a linear approach where your hands, shoulders, and hips are aligned with each other (essentially holding an overhead position while bent forward).

Try to avoid letting the foot come ahead of the vertical axis of the hips to reduce the pressure on the low back, and work on getting full extension with each stride coming from the hips and knees.

Or you could lean into it with your torso at a 30 or 40 degree angle from the ground.

If using a commercial space, pushing on turf or carpet will be massively easier than trying to push a sled on rubberized flooring. Concrete or asphalt works well for outdoor work.

For added points, try to push an object up a gradual incline like you’re building the pyramids.