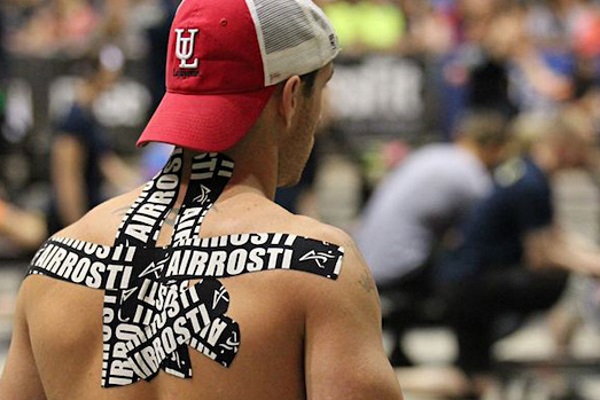 Things That Can Bite You in the Ass
People who are trying to heal themselves using self-administered rehabilitation and regeneration techniques are often doing more harm than good.

With the mainstream popularity of things like foam rollers, stretching protocols, and even tape to enhance joint and body position, it’s time to set the record straight.

Here, in order of descending stupidity, are the four most useless rehab methods that not only have limited carryover in performance and health, but can actually come back around to bite you in the ass.

#4  Foam Rolling
The foam roller may be the single biggest time waster in the fitness industry.

Soft tissue work including foam rolling, trigger point work, and even my hands-on self myofascial-release (SMR) techniques need to be focused and goal oriented processes. If you find yourself rolling the same muscles every single day, it’s safe to say that your “practice” isn’t yielding any notable results.

Worse yet, flailing around on the foam roller with a smile on your face and carrying on a passionate conversation about Game of Thrones isn’t the way it’s done. Just the term itself, “foam rolling,” has you set up for failure. It sounds soft, fluffy, and enjoyable.

It should be none of those when executed correctly.

You know who has the right idea with self-sufficient soft-tissue work? Mobility expert Kelly Starrett. He doesn’t call this practice foam rolling. Instead it’s referred to as “smashing” and he uses specific tools on select regions of the body.

Putting yourself into some serious pain in hopes of tissue deformation (and subsequent remodeling) and muscle tone reduction is what you need to create long lasting results.

There’s a few key things you can do to manage your soft tissues and enhance your health and performance. Prioritize your foam rolling on just a few targeted areas per day until these areas are resolved.

Big, superficial muscles like the quads and lats can be worked very well with the roller, so don’t throw the tube away quite yet.

If you think foam rolling is going to enhance your athletic performance, the research doesn’t support you.

What multiple studies do show, though, is the ability for self-myofascial release to significantly alleviate muscle soreness and increase muscle flexibility for short periods and potentially long-term periods when used on specific areas for more than two weeks.

In other words, the roller can potentially expedite the recovery process.

When dealing with pinpointed soft tissue restrictions and dysfunction, there’s nothing better than getting your hands dirty and literally working on yourself.

Your fingertips provide a much smaller surface area that match the size of small structures (like the rotator cuff tendons) while also allowing a sensory-rich environment for you to explore your body.

The more you learn and discover in terms of muscles and structure, the better you can apply that knowledge to your training by enhancing a mind muscle connection.

But if this sounds like too much concentrated effort, just keep flailing around on the roller with nothing to show for it. My recommendation will still be here when you come to your senses.

#3  Kinesio Tape
Since when has wrapping yourself up like a brightly-colored mummy become a prerequisite for being an athlete?

Though kinesiotape has been in use in the therapy industry for a while now, everything went into overdrive after the 2008 Beijing Summer Olympic Games.

You probably remember seeing the Americans kick some major ass on the beach volleyball sand, where both the men and women teams were noticeably covered in that mysterious tape.

But was it really? Since that time, there have been countless research articles published looking into the efficacy of kinesio tape for both pain modulation and performance enhancement.

Unfortunately, a majority of studies show that the tape is of no more help to an athlete’s performance than any other faddist trend we’ve seen sputter through the industry.

White athletic tape has been around for almost 100 years, but too bad it didn’t sport a logo. Johnson and Johnson really missed out on that mega-opportunity.

The thought is that tape can be strategically placed over the skin in areas that can either inhibit or facilitate muscular tone, thus enhancing joint positions and the production of muscular force.

There are rehab experts out there that swear K-tape is the most game-changing tool they’ve used for enhancing the performances of their athletes, but the chances of it working when an amateur with no experience administrates the tape is about as likely as an ice cube’s chance in hell.

Do This Instead
If you’re going to go down that rabbit hole just because those jacked and conditioned athletes throwing around absurd weights in the CrossFit Games are showing more Rock Tape logos than they are skin, at least do it right.

Look, there’s a reason why certified practitioners and movement specialists get certified in this stuff. There’s indeed a science and skill set to properly administrating a theoretically sound K-tape treatment.

Go see one of those people. They paid thousands of dollars to be a certified tape specialists and may actually know what they’re doing.

That said, you can tape yourself up using nothing but plain athletic tape. It’s not a cure-all, but the treatment can be useful in some circumstances.

#2  Stretching
Do you have tight hamstrings? You must start stretching! Lower back pain and discomfort? I bet you aren’t stretching! Sustained an injury to your hips or spine? Better do yoga!

These are the kind of insane misconceptions about stretching I deal with on a daily basis with my clients, some of whom, I may add, are world-class athletes pushing the limits of physical achievement.

If world-class athletes and well-informed clients who have a passion for wellness are this confused about stretching, the layperson must be monumentally screwed when it comes to the subject.

What we have to ask is, what exactly does static stretching do to the human body, and does it have a place in athletic performance and reducing injury rates?

It’s important to mention that physiologically speaking, it’s extremely difficult, if not impossible, to actually add length to a contractile tissue such as a muscle.

What’s essentially happening with any type of mobilization of an area is the relaxation of that muscle and the reduction of its tone, which are largely neuromuscular properties, not mechanical.

Now that we got that straight, here’s the deal. Static stretching of a tissue over a 45-second period has been shown to increase muscular flexibility that may even last more than 24-hours in certain muscle groups.

That increased range of motion may be a double-edged sword, especially when executed right before an athletic event or workout.

If you’re stretching with the intent of reducing likelihood of sustaining an injury during athletic participation, the verdict is still out. What we do know is stretching can reduce muscular force and power output in certain muscle groups, which can potentially decrease the level of performance.

Not exactly what you were thinking when you went down to touch your toes, is it?

Do This Instead
Static stretching done for long durations has its place in a select population of people who are literally so tonic (shortened and tightened) that administering a stretch is the only way to prevent serious and debilitating contractures.

For the rest of us, the use of dynamic stretching and oscillating protocols can get the job done without adding to the traditional problems posed by stretching.

Dynamic warm-ups are nothing new by now, and should be programmed before every type of exercise, training, or athletic event to increase local blood flow to active tissues, lubricate joints, increase core temperature, and prime the neural system.

As for adding functional length to problematic tissues, the use of oscillations – moving in and out of near end-range of motion – for specific tissues can lead to marked improvements in the tone of tissues without overstressing the musculotendinous junctions that notoriously take the brunt of a static stretch hit.

This stretch on, stretch off range-of-motion may only be an inch or two, but it will be far easier on the tendons and non-contractile tissues.

Do this back and fourth like a pumping motion, attempting to get just a little more range of motion through those tissues each time. Stick to 60-120 seconds per tissue to start with and work your way up to 5 minutes at a time if you can stomach the tension.

Think it’s too simple to work? Try it out for yourself.

#1  Icing
In 1978, The Sports Medicine Book, authored by Dr. Gabe Mirkin, introduced the concept of RICE – rest, ice, compression, elevation – for the treatment of athletic injuries. It makes sense to ice down an injury as soon as possible to limit swelling and maintain function, right?

In 2014, Dr. Mirkin went on record debunking his own work pertaining to the ice portion of the RICE acronym for acute musculoskeletal injury management. It takes a special man to admit that countless research articles and reviews had disproved his life’s work, but we’re all glad he did.

And while he was at it, Dr. Mirkin also shed some light on his recommendation for complete rest after sustaining an injury. “With minor injuries, you can usually begin rehabilitation the next day,” said Mirkin.

Hey, if the guy who literally wrote the book on injury management is saying don’t restrict movement or ice an acutely injured area, we damn well better listen!

Do This Instead
It’s a good thing there were a few more letters in the RICE acronym that stood the test of time.

Compression and elevation of acutely injured areas are still highly effective and should be prioritized after sustaining a low to moderate-level injury. Along the same lines, you might want to experiment with VooDoo Floss.

But as far as rest and ice (R and I), it’s best to rethink those letters