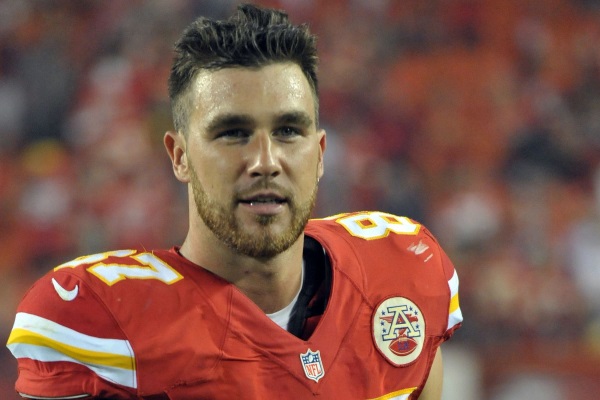 Security guards stop what they’re doing to embrace him. Former teachers appear out of thin air to shake his massive hand. One even chides him for not returning Facebook messages. It seems everyone wants a hug, a handshake or a photo with him. With a gargantuan smile plastered across his face, Kelce is eating it up.

A few minutes later, as Kelce is about to step into the athletic director’s office, a timid freshman hovers behind the door. Kelce meets his gaze.

“Can I take a picture with you?” the student asks, meekly.

“Of course!” Kelce responds, bounding back into the hallway to pose in front the student’s iPhone camera.

Things are clearly a lot different for Kelce than they were the last time he traversed the hallways of this high school.

“There’s a lot of crazy stuff going on,” Kelce says later, after he’s had a chance to reflect on the scene. “I wasn’t expecting anyone to recognize me.”

Nine years ago, Kelce was an abnormally tall quarterback for the Cleveland Heights Tigers. He ran more than he threw. But he was dynamic enough to earn a scholarship to the University of Cincinnati, where he was turned into a tight end.

His combination of size and speed resulted in a breakout senior season, in which he caught eight touchdown passes and racked up 722 yards receiving. The Kansas City Chiefs took Kelce with the 63rd pick of the 2013 NFL Draft, but a knee injury sidelined him for his entire rookie season.

It wasn’t until last year, a season in which he led the Chiefs in both receiving yards and touchdowns, that Kelce truly broke out in the NFL.

“It built even more confidence,” Kelce says of his five touchdown, 862-yard sophomore season. “It’s something to build on.”

Today, Kelce can hardly go anywhere or do anything without being recognized. The barbershop he visited at a youngster has his signed Chiefs jersey hanging from the wall, dwarfing a smaller picture of his older brother Jason, a star center for the Philadelphia Eagles. It’s a testament to how big Kelce has become on his home turf.

“It was hard at first,” Kelce says, about adjusting to the fame that inevitably comes with being a professional football player. “I like to go around and have fun. That’s kind of my MO. I enjoy life. I always have and I always will. I’ve had to restrain and hold back a lot of things I want to say and do. Not saying that I’m out here being an idiot everywhere I go, but you just have to be a professional.”

The limelight will only get brighter. Last year he was medically cleared to play just a month before the season. This off-season he’s fully healthy. The Chiefs’ release of veteran Anthony Fasano means Kelce will be the team’s primary pass-catching tight end, and the addition of wide receiver Jeremy Maclin will open up the middle of the field. Kelce is poised to explode.

“This year, it’s there for the taking. I know not only what my role is, but I know that, OK, now I belong,” says Kelce, adding that ranking in the top six in yardage among NFL tight ends in 2014 proves that he’s capable of playing with anyone in the league.

Later, inside his old high school weight room, Kelce works to prepare his body to take his game to the next level. His workout focuses on his core and on increasing his strength in both his upper and lower body so he can get back up to playing weight in preparation for training camp.

After his lift, Kelce heads out to Heights High’s gleaming new football field, complete with state-of-the-art field turf, where he runs crisp routes with a local quarterback and tight end. One pass floats over his head, but Kelce extends his left arm as far as it can go and snares it with one hand. He looks like he’s in mid-season form already.

As his homecoming winds down, the school principal pulls Kelce into his office to show him blueprints for an extensive renovation the school is planning. When it’s finished, Cleveland Heights High School will be bigger, more modern, and poised for even greater things—much like Kelce is today.

Travis Kelce’s Off-Season Workout
Kelce is focused on his core this off-season in an attempt to get better at bouncing off hits at the line of scrimmage and downfield. Using a weight bench, he begins his workout by performing the Bunkie Test, a series of isometric holds designed to assess core functionality.

“Your core is like your engine. It triggers everything and gets everything going,” Kelce says. “Guys can be as big as they want, but if they’re weak in the core, they’re not going to be a good football player.”

From there, Kelce moves on to the rest of his body: Squats for his legs, Chest Rows and Bench Press for his upper body, Skull Crushers for his triceps. He’s massive in person, filling out every inch of his 6’5″ 260-pound frame.

“As an athlete, your body is your business,” Kelce says. Judging by the workout he performs at his alma mater, business is looking good.

With your chest facing up, extend your body so your heels rest on a weight bench and your forearms are on the ground, bent 90 degrees the elbow. Hold the position for 45 second, keeping your core tight. Repeat three more times, once with your chest facing the ground and once facing either side. Click here to learn how to master Kelce’s Bunkie test.

Weighted Squat
Stand with your feet slightly wider than hip-width and the bar positioned on your back. Keeping your back straight and your core engaged, sink your hips back while pressing your knees forward to lower into a Squat. At the bottom of the movement, your thighs should be parallel to the ground. Extend your hips and knees to drive up and return to standing.

Bench Press
Hold the bar above your body with your arms straight. Lower the weight with control to your chest, then push the bar back up to the original position.

Start in an athletic stance holding dumbbells just above your knees with your palms facing in. Keeping your core tight, back straight and feet flat on floor, bend at the waist to lower the dumbbells as far down the front of your legs as flexibility allows. Forcefully contract your hamstrings and glutes to rise to the starting position.

Dumbbell Bicep Curls
With both hands at your sides holding dumbbells, curl each arm up until your hands reach your shoulders. Lower with control and repeat.

Even when he’s being casual, Kelce maintains a cool edge by sporting threads that convey confidence. During his visit to Cleveland Heights, he wore an American flag-themed leather jacket, so loud it nearly shouted the Star Spangled Banner. Most people could not pull this off, but Kelce’s unabashed personality and swagger made it work.

Take these tips from Kelce to stay comfortable in your own skin:

1. Wear What You Want

For Kelce, style is about standing out. He says, “I like to be seen. I like to be heard. I like to wear things that reflect that. I’m into being loud and want my outfit to be the first thing you see when I walk in the door. It’s a way to express yourself.”

2. Have Fun and Be Yourself

Kelce enjoys playing pro football and isn’t afraid to show it. After a touchdown, he breaks out in a celebratory dance like the “Nae Nae.” Off the field, he participates in dance-offs with fans at rodeos and chats with fans on social media. Kelce lets his personality shine through.

3. Walk the Walk To Talk the Talk